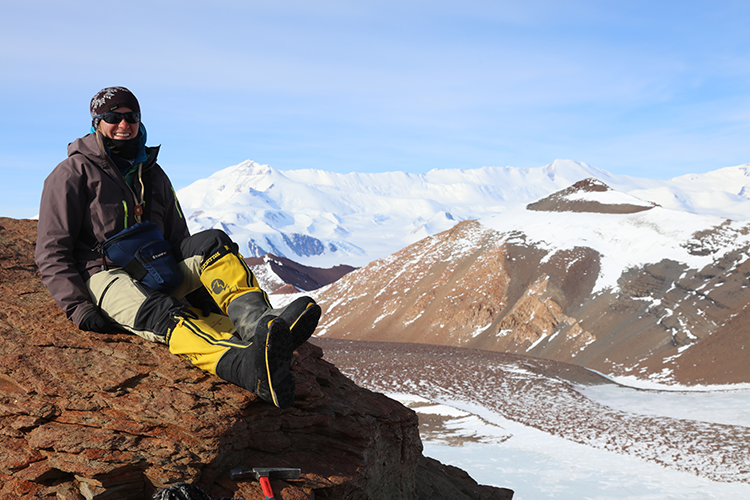 Between 256 million and 335 million years ago, the landmasses of the Southern Hemisphere were squished together in a super continent called Gondwana. Gripped in the cold throes of an ice age, glaciers moved slowly across the landscape, churning up ground and leaving a trail of sediment in their wake. They retreated as the Earth warmed, transitioning from an icehouse to a greenhouse climate at the end of the Paleozoic Era.

Today, UWM geosciences students are studying those glacier trails, hoping to discover information about the past that might help us understand our warming climate in the present.

Nailing down the geologic record

Since about the 1960s, said distinguished professor of geosciences John Isbell, scientists have worked under the idea that Gondwana was covered by one giant glacier, buried under ice for over 100 million years.

But, he said, when studied in detail, the geology tells a different story. Drawing on research about ancient sea levels, Isbell determined that the late Paleozoic oceans were not gaining nor losing water volume on the scale that would be locked up in an expanding and shrinking massive ice sheet.

In fact, research shows that there were at least 22 ice sheets. Now Isbell and his students are trying to determine what might have happened to those glaciers and the landscape during those intervals.

“We look at physical sedimentology – everything from the size and shape of a sand grain to the large-scale architecture of sandstones. That tells us about what the glaciers were like at that time,” graduate student Libby Ives said. “Because these rocks are only preserved in certain places, we have to go to those places.”

For graduate student Eduardo Luiz Menozzo da Rosa, that includes the Paraná Basin in Brazil, and, this May, Namibia.

“There are some valleys over there that are believed to be shaped by the glaciers. Those valleys are the connection between the ice sheets in Africa to the eastern part of the Paraná basin,” he said. He’s looking for evidence that the same glaciers that might have shaped the landscape of Namibia traveled far enough in Gondwana to alter Brazilian geography as well.

“All of John’s students are looking at small little snippets, and then hopefully we’re going to put that big picture back together after we’ve got somebody covering every area,” graduate student Kate Pauls said. She’s researching the paleoclimate of Argentina, examining the bulk rock geochemistry of the sedimentary units of the Paganzo Basin to look for evidence of what the environment was like during the ice age.

Other students have traveled to places like Patagonia in Argentina, Uruguay, Brazil, Antarctica, and Tasmania.

This research is essential because the late Paleozoic ice age was the last time that the Earth transitioned from an “icehouse” to “greenhouse” conditions – a state marked by higher temperatures, plants growing at the north and south poles, with ice found only on mountaintops.

Today’s climate conditions seem remarkably similar. Just like the late Paleozoic ice house to greenhouse transition, an overabundance of carbon dioxide in the atmosphere seems to be leading to the shrinking of today’s ice caps. Isbell warns, though, that today the Earth is warming at an unprecedented rate.

“Understanding the history of our planet is important to interpreting what’s happening in our present day,” Ives said. “I took a wilderness first-responder course, and one of the things they drilled into our head was when trying to determine what is wrong with someone, you have to ask, ‘What’s normal for you?’ To understand the present state of our Earth and these large-scale (climate) trends, we need to know what was normal in the past.”

That way, da Rosa added, “we can start to make predictions about future climate change.”

For instance, the ice house to greenhouse transition was followed by a mass extinction event when 90 percent of Earth’s species died out. The planet is in the midst of another mass extinction, Isbell said, and we should pay attention to the past to understand what might be in store should more carbon and greenhouse gases be released into the atmosphere.

That should concern everyone, Isbell said.

“We can’t roll the dice and expect to survive every time.”

Though future predictions surrounding climate change can seem bleak, the work itself is not. Pauls, Ives and de Rosa recount with excitement traveling to new countries, working with international teams of geologists and paleontologists and braving remote areas and extreme weather conditions in the name of science.

“The best New Year’s Eve party I ever had was in Antarctica, 300 kilometers from the South Pole,” Ives said with a laugh. “The sun was out the whole time. The next day, everybody played baseball with a rock wrapped in bubble wrap, in the middle of a glacier.”

Pauls’ favorite memory of field work comes from her time in Argentina. She and Isbell were collecting rock samples with an Argentine colleague, Carina Colombi, when Isbell began working ahead. To reach some hard-to-climb areas, he abandoned his backpack.

“After running out of pockets, he had apparently just started shoving samples in his shirt. We were like, look! It’s Kangaroo John! Because he just had a bulging pouch of samples,” she said.

Isbell himself recalls with pride being the first person – or multicellular organism, for that matter – to lay eyes on a particular region of Antarctica, and braving treacherous conditions in Siberia when the next-closest town to his outpost was 2,000 miles away in Alaska.

Wherever they travel, whatever the conditions, there’s plenty of rock and sediment waiting for them.

“Of course, when you answer something, you always find another question,” Pauls said. “That’s how science is.”