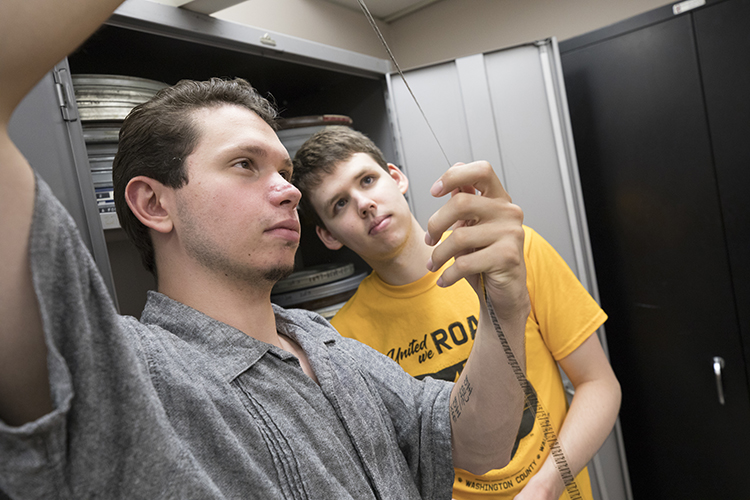 “Hugo has been researching the history of our film studies program and Pat’s foundational role as a first-generation film studies scholar,” Williams said.

The UWM film studies program was one of the first programs of its kind in the 1970s, due in large part to Mellencamp.

Balistreri first approached Williams two years ago with an interest in doing more film archiving with the unused and untouched collection at UWM. He was able to get SURF funding through the Office of Undergraduate Research to start digging into the film reels, first cataloging the collection and noting their condition.

“For a good year and a half, it was in my hands,” said Balistreri.

Williams cleared space in her office for him to work.

Now that the film archive had a name, it needed a home.

“Tami suggested we get in touch with C21 (Center for 21st Century Studies) to possibly host the collection,” Ljungbäck said.

In June, Balistreri and Ljungbäck, with film studies student Haley Richards, traveled to Rochester, New York, for the Domitor 2018 conference at the George Eastman Museum.

Taking what they’ve learned in Rochester, the students are working to improve the storage conditions of UWM’s own collection. The next plan is the “Save the Archives” film festival on Sept. 20, which will honor Mellencamp’s work and collection. The screening will feature 24 short films from around the world and conclude with two archival prints from the Mellencamp Collection, accompanied by live music. The screening will benefit the archive and the students’ preservation efforts, so that necessary supplies can be purchased.

“Our festival is an effort to let people know about the archive,” Ljungbäck said, “If you’re interested, we exist, and there are ways to get involved.”

‘Save the Archives’ Film Festival Sept. 20

UWM’s Moving Image Society will screen two dozens films submitted from around the world, along with two prints from UWM’s Patricia Mellencamp collection, at the inaugural “Save the Archives” Film Festival Sept. 20 at the Union Cinema.

Admission is free, but a $5 donation is suggested. Money raised from the event will go toward preserving the films in the Mellencamp collection.

More information, including synopses of the films that will be screened, can be found on the UWM Moving Image Society website.