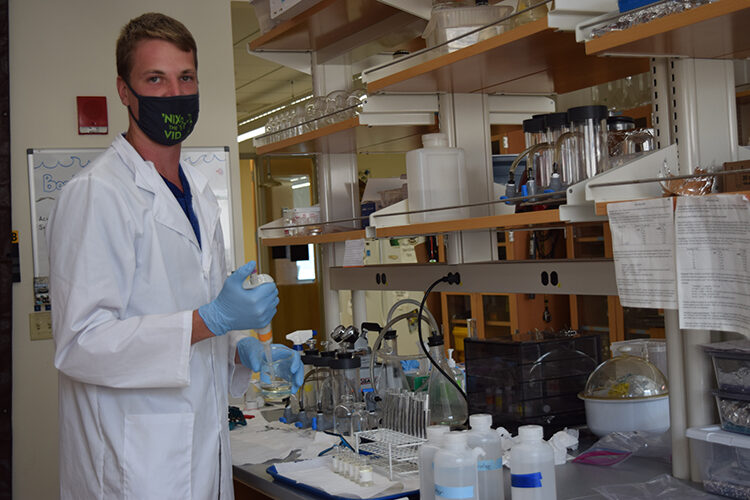 UWM School of Freshwater Sciences student Tyler Kunze developed an appreciation for the environment while growing up on a dairy farm outside of Green Bay. (UWM Photo/Heidi Jeter)

Tyler Kunze never anticipated a career as a water scientist. Yet in May, he became the first student to earn a bachelor’s degree in water science from UW-Green Bay. He’s now a graduate student in UW-Milwaukee’s School of Freshwater Sciences.

“It’s been a long and winding road getting here,” said Kunze, who grew up on a dairy farm an hour’s drive from the nearest body of water. “I never would have thought graduating high school that I would be in this position today.”

Kunze’s path exemplifies how opportunities to conduct undergraduate research and to build a professional network can lead to more water scientists – both of which will happen with the launch of UWM’s new Bachelor of Freshwater Sciences degree.

On the family farm, Kunze developed a strong appreciation for the natural environment. He also really liked math and chemistry. A bachelor’s degree in environmental sciences sounded like a perfect way to combine his interests.

Toward the end of his sophomore year, Kunze took a course with Christopher Houghton, an assistant scientist and a graduate of UWM’s School of Freshwater Sciences, who suggested graduate school. The idea began to take hold after Kunze interned with NEW Water, the water resource utility serving northeastern Wisconsin, where he met people who managed the watershed. He added the water science degree when UW-Green Bay launched the program in 2019 because he thought it would prepare him for graduate school.

“The gears were turning in my head that grad school was a possibility,” Kunze said.

“When I started my undergrad research, it jump-started my passion for conducting research and discovering new things about different processes in the science field.”

That research involved working with his advisor to determine whether Lake Michigan water was leaking into the aquifers in Door County. Kunze spent the summer before his senior year knocking on people’s doors to collect water samples from their wells. Although they didn’t find water from Lake Michigan, they used the samples to create the first isoscape — a geologic map of isotope distribution — for northeastern Wisconsin groundwater. Kunze analyzed the data and presented it at the 2021 American Water Resources Association Conference.

“It gave me a head start on what I’d be doing at the School of Freshwater Sciences,” Kunze said.

In September, he began his master’s in freshwater sciences at UWM, and he was able to begin working with his advisor and UWM professor Harvey Bootsma in June. Kunze spent the summer studying invasive mussels at Sleeping Bear Dunes National Lakeshore with Bootsma, Ben Turschak, a Freshwater Sciences alumnus who is now a fisheries research biologist with the Michigan Department of Natural Resources, and scientists from the National Park Service.

“What I’m most looking forward to at the SFS is meeting these amazing scientists and learning from them,” Kunze says. “It also will be really fun to do my own research, to figure out a problem and to try to find a solution that can help people.”

Kunze isn’t sure where his future in water will take him: water chemistry, water quality, invasive species mitigation, maybe a PhD? For now, he’s leaving his options open.

“If you would have asked me even two years ago if I was going to get my master’s degree, I probably would have had some doubts,” he says. “I don’t want to put myself in a box. I want to see the different opportunities and see where I fit.”

One thing is certain: Wisconsin has itself another freshwater scientist. 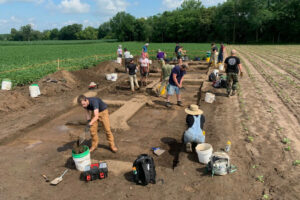