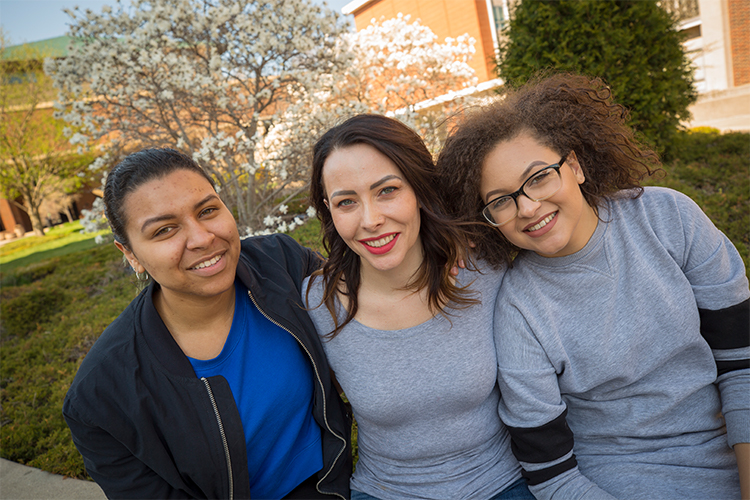 Abbey Palmer returned to school to change careers. Making it extra special — her daughters, Anya (left), a sophomore, and Mia, a freshman, are also UWM students, in the Peck School of the Arts. (UWM Photo/Troye Fox)

More than 3,300 UWM students began their adventures in the great big world after graduating Sunday, May 20, at the UW-Milwaukee Panther Arena.

Every one of them has a story. They came from big cities and small towns, some the first in their family to attend college. Some hope to conquer the worlds of business, art, architecture, teaching, history and more. Every one has hopes and dreams.

Here are their stories, with links to each video:

A car crash left Abbey Palmer unable to continue her career as a massage therapist. Casting about for what to do, she decided to pursue her love of languages and linguistics at UWM. And that opened up a world of possibility and adventure.

She’s traveled to China and Russia the past two summers, buttressing her minors in Chinese and Russian. She’s taught English to refugees. And now she’s heading to England to pursue a master’s degree at the University of Oxford. 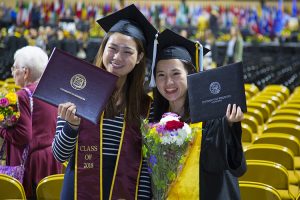 “I am both proud and amazed of where I am right now,” Palmer said. “I’m going places and I’ve been places just in the past few years that I never thought about them as possibilities.”

UWM is a family affair for Abbey Palmer. Two daughters — one a freshman, the other a sophomore — attend the university as well. “It’s really cool spending time with my daughters on campus,” Palmer said.

Little by little, task by task, Dakota Crowell is finding ways to make the world a better place.

Surveys suggest that at UWM, like other universities, up to half of students don’t have enough food at some point in their college career. Crowell decided to do something about it, by helping create a food pantry on campus. In just its first year, the pantry has collected more than 5,000 pounds of food and served some 120 students.

During an internship at the Wisconsin Department of Transportation, he’s worked on making railroad trail crossings safer. The internship was a good fit for his urban studies major.

“I’ve just been really grateful that someone like me from a rural town would have the opportunity to go to a school like UW-Milwaukee, really try to explore my identity and what that means for my leadership and what I want to do for the future and to take those skills and apply them to be a positive changemaker,” Crowell said.

Sandra Plascencia has faced plenty of obstacles already. Born in Mexico as the youngest of eight children, and without much financial support, she nevertheless became the first of her family to go to college.

Quickly, UWM and Milwaukee became home. The university’s clubs, events and activities helped her find friends. And studying for a semester in Spain broadened her world.

An internship at the Department of Health and Human Services in Waukesha cemented her desire to help others through social work. Even as she looks to the future, she considers the past.

“When you’re a first-generation student, this dream… it’s not just mine,” Plascencia said. “It’s of all of the people that came before me — my parents, my siblings, even my grandparents when they were raising my parents.”

Ali Bakhshinejad: Doctoral student from Iran finds a home at UWM and in Wisconsin

Ali Bakhshinejad ran a business with his brother in Iran, but he had an itch to travel and learn. That curiosity wanderlust led to a master’s degree in Iceland and a doctorate in engineering at UWM.

At UWM, he threw himself into research and entrepreneurism. The Student Startup Challenge and I-Corps program fed his business mind, and his research could lead to better treatment for brain aneurysms.

Knowing no one at UWM when he arrived, Bakhshinejad wasn’t sure how he’d feel. He was thrilled to find acceptance and encouragement.

“That was huge for me, and it’s still huge, how people respect you, how they treat you here at UWM,” Bakhshinejad said.

And now? He’s considering a few job offers. And he’s found a home in Wisconsin, where he intends to stay.

Four years ago, Milwaukee and UWM seemed very far away for Savannah Huettl. No one in her family had gone to college. Not many people from her small town went off to the big city. And beyond that, her family’s modest means seemed to preclude college.

A full-tuition scholarship opened doors for her, and Huettl charged through. Four years later, on the brink of earning an accounting degree and with a full-time job waiting, she looks back with wonder.

She worked internships at Northwestern Mutual Life and PricewaterhouseCoopers. She studied overseas in Spain and Germany.

“The thing I learned is to wake up scared every day,” Huettl said. “If you aren’t scared to lose something, if you’re not working toward something that you might not achieve or that challenges you, then life’s not exciting.”

A 4-year-old with two brooms and a toy car had an idea: He’d tie the brooms to the back of the battery-powered Jeep and clean the streets. It was a foreshadowing of what Gabriel Yeager wanted to do with his life: downtown management.

That dream led Yeager to UWM’s School of Architecture and Urban Planning. While in school, he landed an internship at a downtown Milwaukee business improvement district. And that led to him being offered a job there before graduation.

“I hope I make my parents proud,” Yeager said. “I moved to the city of Milwaukee from Minnesota in 2014, have put down roots here, have made friends here, and really the opportunity to continue working in this world-class city is an absolute dream come true. I’m proud to be part of the story.”

On the lighter side

In the video, grads re-create the intros to some of the classic TV shows they grew up with.

The year before, Mone and grads danced along to Justin Timberlake in “‘Can’t Stop the Feeling!’ – UW-Milwaukee Graduation Edition.”