Every year the Milwaukee Business Journal highlights 40 emerging community leaders in its “40 Under 40” issue.

This year, six of the 40 were young UWM alumni. Here’s what they had to say about how the university helped shape their careers. 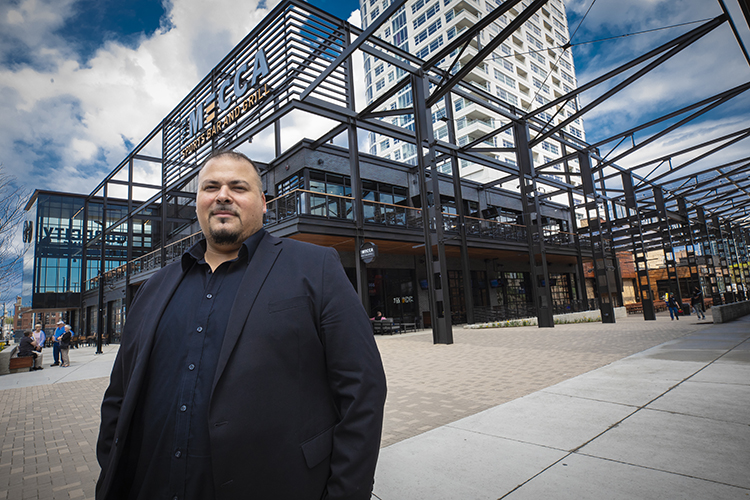 Steve Morales got interested in architecture when he was in second grade at Doerfler School in Milwaukee and won first place for his illustration for a book report about Johnny Appleseed.

“I had spent more time drawing the barn and making it look three dimensional than on any other part of the story,” he said. His illustration was hung up in the Milwaukee Art Museum as part of an exhibit of student work. “That was a real special moment for me. Ever since then, I’ve always wanted to be an architect.”

After applying to several other universities, Morales chose UWM at the recommendation of a friend in the community. “It was one of the few programs in the Midwest that was accredited and that I had interest in,” said Morales. When he finished his undergraduate degree, he again looked around for a graduate program, but a professor who was also a practicing architect told him UWM was the best fit for him. She told him: “They are really pushing the boundaries on where things are going, and it would be a much better choice than the others you are looking at.”

“That was good advice and I took it.”

His work at UWM had a positive impact on his career. “I had some amazing mentors who connected with me on a personal level going through the SARUP (School of Architecture and Urban Planning) program. They helped me develop into the professional I’ve become.”

Some of the recent projects he’s worked on include the Drexel Town Square in Oak Creek and the Fiserv Forum entertainment block project in downtown Milwaukee. “It’s been great working with the Milwaukee Bucks…helping them create the living room of Milwaukee.” 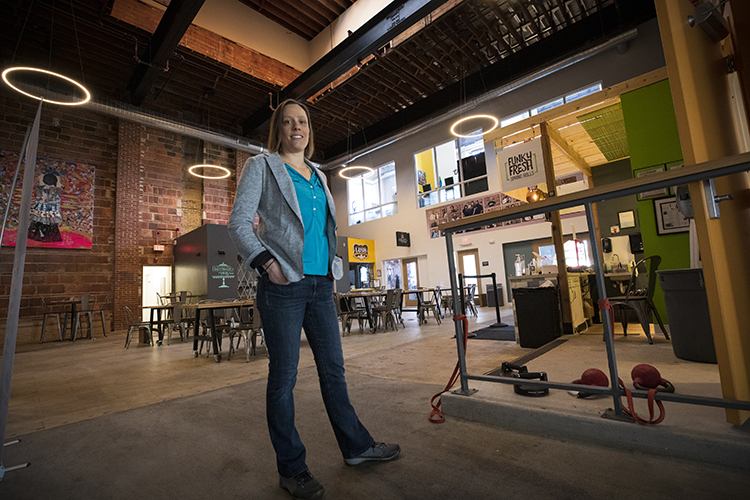 Olker, who grew up in Vermont, earned her undergraduate degree in pre-architecture from a liberal arts college on the East Coast.

Her interest in architecture grew out of her combination of creative skills and enjoyment of mathematics and engineering in high school.  She loved drawing, painting and photography and also taking apart and rebuilding mechanical devices like the family clocks. “My dad told me there’s a profession that combines those things. As soon as I looked up what architecture was, I knew it was exactly the right thing for me.”

She chose UWM for graduate work because she was looking for a university that had a good program for non-accredited undergrads. Looking through U.S. News and World Report, she found UWM on the list of top 20 architecture programs. “I looked at the offerings and it was a good fit, and that’s how I ended up here.”

Her UWM background has helped her build a network of connections and resources in the community. “Fifteen years out, I’m still reaching out … whether it’s to teachers or other students for advice and making connections.”

In addition to her work at HGA, she’s active in the community, starting an organization called Community Action, an all-volunteer group of architects and engineers focused on giving back to the community.

One of her favorite projects was the Sherman Phoenix project, converting a historic building damaged during civil unrest in the Sherman Park neighborhood into an entrepreneurial hub.

“It was really an honor to work on it. It was very unique and in some ways a groundbreaking approach to rebuilding a community that had had some struggles.” 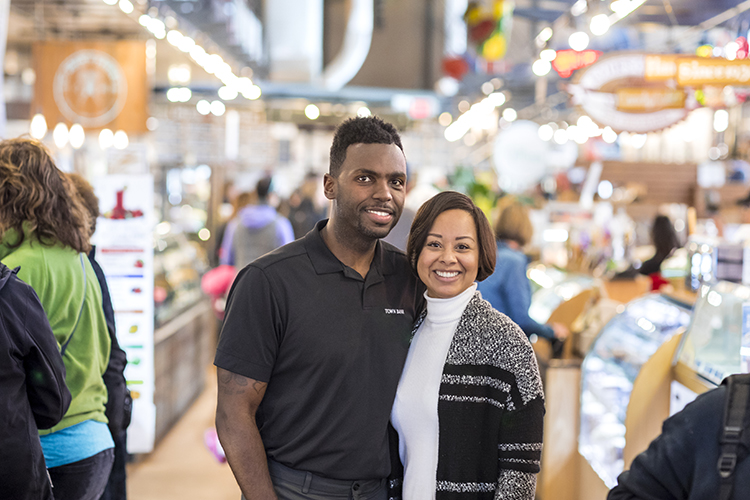 The Business Journal honored Norwood and Washington individually, but they wanted to be interviewed together for this article about their UWM experiences since they met and became friends at the Lubar School of Business.  They were both Lubar Business Scholars, served with the Delta Sigma Pi professional fraternity and the Black and Gold Committee, attended classes together and worked out together at the Klotsche Center (where Norwood met her husband).

Norwood started college in the sciences at another university, but after a few semesters decided the sciences might not be what she actually wanted to do. “I started taking some business courses and enjoyed the coursework. My dad actually planted the seed in my head. He told me UWM has a really strong business program and he was familiar with some of the staff and faculty.”

So, the summer between her sophomore and junior years, she transferred to UWM, taking three summer classes to put her on track to be accepted into the business program.

“That’s when I met Ranell. He was the first person that I actually hung out with, and we took classes together. We were pretty much inseparable.”

“One thing that sticks out for me,” says Washington, “was that we were both Lubar scholars.” Washington, who had graduated from Washington High School, became interested in UWM through a recruiter, and found the financial package he was offered a deciding factor.

“I started the program at UW-Milwaukee and loved it, then I made some great friends. Devon taught me a lot about myself and kind of helped me look at opportunities in a different way than I typically had before.”

Norwood said one of the things that she liked about her UWM experience was the sense of community, something she hadn’t felt at the university she previously attended.

“I remember the first evening class, Ranell just came up to me and said ‘hi, you’re new around here.’ I immediately had a group of people where we could study together, and had that amazing support system.”

Serving in leadership roles in Delta Sigma Pi was a formative experience for both of them. “Those opportunities influenced the kind of person I am now,” said Norwood. “That was one of my first significant leadership experiences. Learning how to bring my skill set to the table and being able to identify that as a strength I had was an important.”

Norwood and Washington were also active in mentoring younger students, particularly students of color. “I took a lot of pride in helping provide that additional information that those students needed to navigate through some of those tough classes,” said Norwood.

Washington liked the diversity of UWM. Working for the campus IT department helped him meet people from all over campus, he said. “I was able to meet a lot of people with different backgrounds and experiences.”

“I think with the university being in the city and a large university, there were so many things you could be part of,” he added.  “We were busy, but we had the support system of our friends and other students.”

Both found the career development center a great help in doing resumes and getting ready for job fairs. Norwood had an internship at Kohl’s and several full-time job offers before graduation.

“I would say from start to finish UWM was really supportive of their students and making sure that they succeed,” said Norwood. 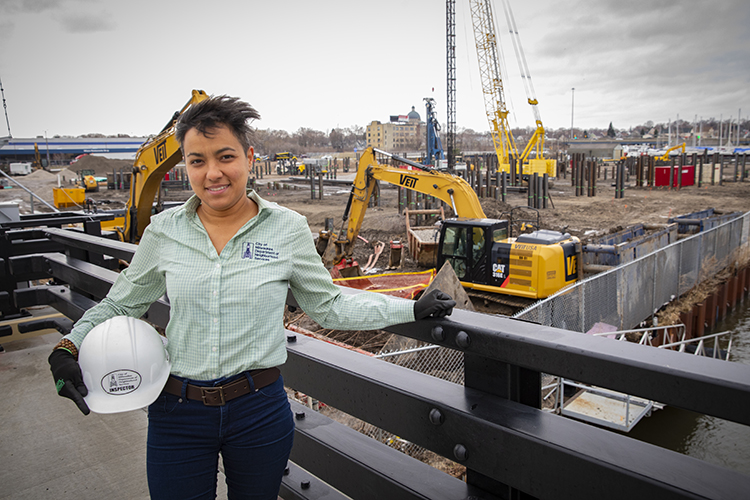 Arroyo-Vega grew up in Puerto Rico, and enjoyed working with her father, who was a contractor and had his own wood shop. She often accompanied him to building sites. “I studied blueprints back when they were actually blue prints.”

That started her interest in building and planning, but it was a cooperative program at that time between UWM’s School of Architecture and Urban Planning and the Inter American University in Puerto Rico that gave her the opportunity to pursue her degree.

“Basically you studied in the Inter American University for two years, then you transferred to UWM to finish your undergrad degree,” said Arroyo-Vega. “I had never been in Milwaukee, but I knew it had a great school of architecture, and it gave me the opportunity to live abroad.”

She recalls arriving with two suitcases and a little bit of savings, but the university community helped her find housing, scholarships and a student job and introduced her to local culture.

“I’ve been forever grateful for that opportunity. My life would not have been the same if I’d gone to university locally in Puerto Rico.”

After earning her undergraduate degree, she worked for two years, then returned to UWM for her master’s degree.

The UWM program’s focus on community planning, urban neighborhoods and local history led to her interest in working for the city. She worked with the architecture school’s Community Design Solutions, which helps local nonprofits with planning and design. And her studies also focused on Milwaukee.

“I learned to understand its history, the patterns, the neighborhoods. Those years of study made me feel more engaged with the community. That’s how I came to know the city. ”

Her passion became neighborhood development and planning in Milwaukee and in her native Puerto Rico. In past, she worked with the Zilber Neighborhood Initiative and the Local Initiative Support Corporation, helping with neighborhood revitalization projects.

“My experiences at UWM were eye-opening for me. It helped me re-envision what an architect can be. Being a planner in neighborhood development was very important to her, she said, and that led to her work in neighborhood housing.

As a building construction inspector, she evaluates structures to make sure they comply with ordinances and works to protect the city’s investment in residential and commercial properties

It’s a varied career, she said, ranging from inspections of small projects to checking out major developments. “One moment I’m telling someone how to repair their porch and then next I’m on the 11thfloor of the BMO Harris Tower on a ladder checking out the floor decking.” 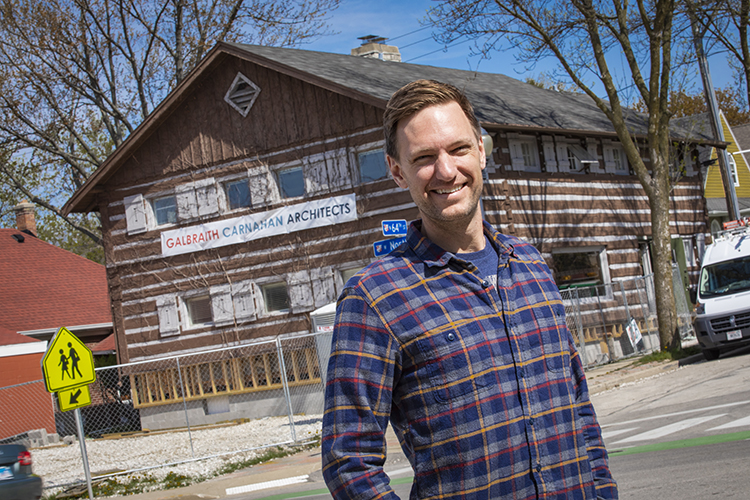 Nick Carnahan likes an architectural challenge. That’s what led him and his partner, Joe Galbraith, to accept the donation of a 1920s log cabin that stood in the way of a proposed apartment complex.  In March 2019, the building rolled through Wauwatosa – from Wauwatosa Avenue to N. 64th Street and W. North Ave.

The cabin, which was originally built by Erie Railroad President Frederick D. Underwood in 1921, will be used as additional office space for Wauwatosa-based Galbraith Carnahan Architects, according to Carnahan.

His firm works on a variety of projects, most recently including the transformation of a former storage facility into a mixed-use commercial building on Martin Luther King Drive. In May 2018, one of Carnahan’s designs was recognized by the American Institute of Architects Wisconsin. That Convivium Urban Farmstead project turned a 1920s greenhouse into a community hub for residents in Dubuque, Iowa.

Carnahan’s interest in architecture started with Legos when he was a child. “I really enjoyed putting things together at home, whether it was a tree fort or a snow fort or whatever. I was always building things. I just kind of gravitated to the profession naturally.”

Growing up in Platteville, when it came time to choose an architecture program, he looked at the University of Minnesota and UWM, choosing the Milwaukee campus because of its relatively compact campus.

“For a country kid coming to the big city, it was easy to digest. Minnesota was spread out, walking across the river, miles and miles between classes.”

At UWM, he found mentors and future colleagues, many of whom he still sees around Milwaukee. He remembers especially faculty members Jim Shields, Hanno Weber, Gil Snyder and the late Harvey Rabinowitz.

Of his experience at UWM, he says, “It’s the program that equipped me with the skills I’m using in my career and that I’ve used for the past 18 years.”