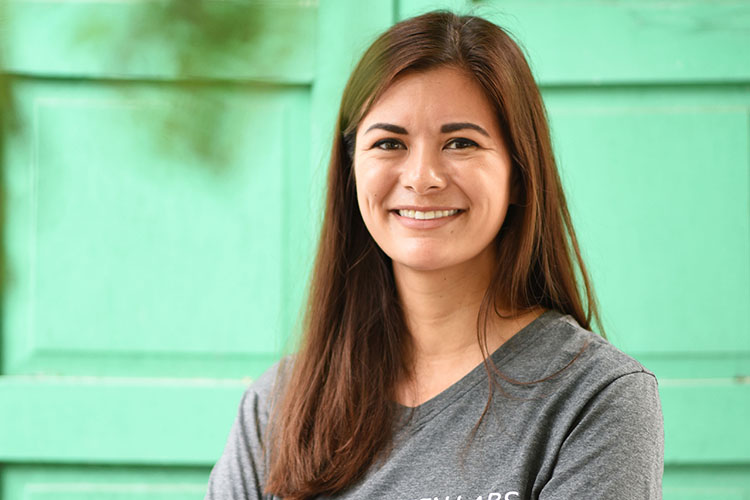 “We really enjoy being entrepreneurs, and we wanted to do something meaningful with our backgrounds and our career paths,” said Kasia Weina, who graduated from UWM in 2010. (Photo courtesy of Kasia Weina)

Kasia Weina and her partner had just moved to Hong Kong and founded their own startup when a friend approached with an irresistible offer: He would finance any startup business they created, as long as they based their operations in his hometown of Da Nang, Vietnam.

So, they packed up their apartment in Hong Kong, settled their cat in for a long flight, and moved to Vietnam to found Evergreen Labs, a startup that acts as an impact venture-building organization.

“We really enjoy being entrepreneurs, and we wanted to do something meaningful with our backgrounds and our career paths,” Weina said. “With Evergreen Labs, we want to prove that you can do good and also make money.”

Running a project development firm wasn’t exactly what Weina set out to do when she entered UWM to major in biology. She was more interested in marine biology and traveling – she completed a study abroad in Taiwan and one in Australia before graduating in 2010.

Her next destination was England, where she earned her Master of Pharmacy degree at University College London, and then Germany for her doctoral education.

After completing their graduate degrees, Weina and her partner, Jan Zellmann, each wanted a change of scenery. The pair moved to Hong Kong with every intention of getting a job, Weina said. Instead, they founded their first startup, a company that produced journals and logbooks made from recycled mining waste. Then came the offer to start a business in Vietnam.

The country is a promising market. Vietnam has a young population with an emerging middle class that can afford – and demands – high-quality products. The economy is still developing, which means that Evergreen Labs can build environmentally and socially conscious business models right into the architecture of their startups.

And there are many startups they’re bringing along.

“We looked at core areas that needed a lot of support. We’re working now in mainly three sectors: agriculture, waste management and sustainable tourism,” Weina said. “We try to tackle these big issues, but these issues occur throughout southeast Asia.”

One of the major problems Weina has identified is food security – “Anything from people dumping chemicals on the farm fields to injecting shrimp with silicon. We didn’t feel safe eating the food,” she said. And, she added, those farmers that did commit to healthy farming practices still saw their crops sold to middlemen before they hit the market mixed with the “dirty” produce. They were being paid the same amount, though they worked much harder to grow their food.

So, Evergreen Labs founded HealthyFarm, a startup that works with local farmers to bring naturally produced, high-quality fruits and vegetables directly to consumers. HealthyFarm purchases “clean” produce from farmers at a better price than they would usually get from their old supply chains, and then sells the food through online and retail channels.

In three years, the business has grown so much that HealthyFarm now supplies food to several of the five-star resorts in Da Nang. With a guaranteed buyer, the farmers are making more money as well.

“Before, farmers would make on average $35 a month. Now, we can safely say we doubled that amount by expanding our crop selection and our buyers,” Weina said. “Now, we’re working with over 250 farmers, many in central Vietnam but also throughout the country. We’re working in nine provinces at the moment, and planning to grow our network as we get more and more buyers.”

And that’s just one business nurtured by Evergreen Labs. Another project, called ReForm, creates commodity products from low-grade plastics like plastic bags and Styrofoam. It removes typically non-recycled plastics from the environment while empowering local waste workers. The business recently created and installed a full set of back-of-the-house lockers in a boutique hotel in Ho Chi Minh City.

In each startup, Evergreen Labs hires a team of dedicated workers. As the business grows and takes on a life of its own, Weina begins to transfer ownership to the team.

“We just incentivized our co-founder in an agriculture project through shares,” Weina added. “So now she’s a shareholder in the company that she built with Evergreen Labs.”

And Evergreen Labs has grown beyond Vietnam. The group has projects going in places like Myanmar and Indonesia, and Weina says she’s focusing on growing those projects while continuing to support the startups in Vietnam.

“It’s definitely more challenging to really incorporate our social or environmental impact into what we do,” she said, “but we believe if it’s done in the right way and with the right approach, we can be more impactful long-term.”