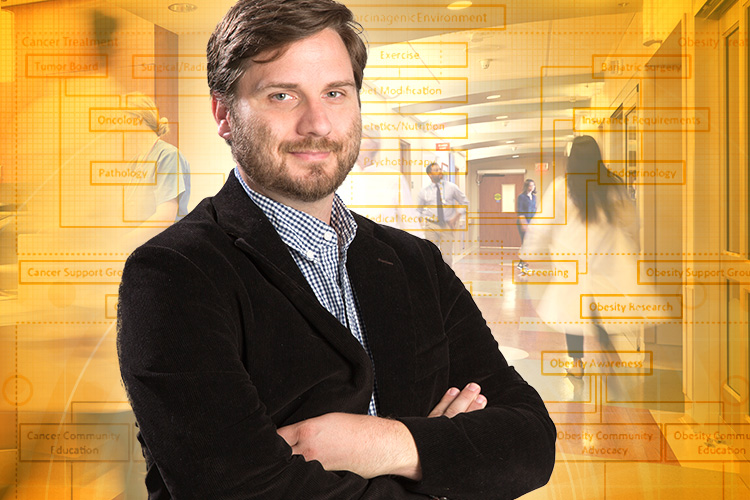 Scott Graham, associate professor of English, says the method he and other colleagues are studying to combat cancer and obesity can be used to tackle complex problems in other fields, such as politics. (UWM Photo/Troye Fox)

When Scott Graham talks about a “wicked problem,” he isn’t expressing exasperation. It’s merely a recognition that the solution requires collaboration between professionals who don’t ordinarily work together on the same problem.

In a recent paper, Graham and his colleagues describe their use of “systems ethnography and qualitative modeling” (SEQM) to approach the problem of people suffering from both cancer and obesity. The causes and treatments of each condition are difficult enough, but when they are combined, the problem becomes exponentially harder – or, wicked.

To tackle it, Graham, who specializes in technical communications, turned to SEQM, which was developed to tackle urgent and complex problems in national security work.

“It was invented for work on nuclear weapons, military defense-type projects,” Graham said. “If there’s a new kind of threat, you have to bring all sorts of people together to work on that. While most of what they do is classified, from what we can tell it seems to be working for them.”

So Graham brought it to bear on treatment and prevention efforts for those who have a high risk of developing obesity and cancer.

“In Milwaukee there’s this huge problem of cancer and obesity overlapping and intersecting, and it’s especially bad for impoverished communities,” he said. “It requires so many people to work on this together from so many areas of the community, so I wanted to see what I could do to bring people together on this problem.”

It’s a classic case of a “wicked problem,” and one perfectly suited as a test of SEQM in the healthcare arena.

“To the best of my knowledge, this is the first time it’s been used in a health care context,” Graham said.

Graham, along with Amy Harley (School of Public Health, Center for Urban Population Health) Sang-Yeon Kim (Communication) and Joan Neuner of the Medical College of Wisconsin, applied for a transdisciplinary challenge grant from the Center for 21st Century Studies to adapt and implement SEQM.

They recruited a wide field of participants: primary care physicians, specialists in obesity and cancer, community advocates and educators. The team observed the participants as they worked and interviewed them to create “knowledge maps” that identified both barriers and opportunities for coordinated work.

Graham views the project as a just a pilot for future efforts in Milwaukee and nationally. While the results are preliminary, the response has been positive.

“The people who participated were very optimistic about it. They made new connections they weren’t going to make otherwise. And they are thinking of pieces of their practices in ways that are more open to collaboration.”

“This needs to be done repeatedly in order to have a really good anchor in the community,” Graham said. “This year was about getting the work out to the scholarly community so that we could get more people working on it.

“We can’t know how well this works if we’re the only group doing it.”

Graham, whose work has focused on medical collaborations, is hopeful that the current project will lead to the application of SEQM in other fields. He’s confident that it or something like it could be useful in a variety of arenas, not least of which is politics.

“There are passionate disagreements about, say, gun control, but there are also places where a lot of people agree, and this is a method that can help identify those places of overlapping interests.”

For example, people on opposite sides of the gun control issue might be able to achieve a shared vision for improving policing.

“On hot button issues, tempers are too high, investment is too long-standing for divided communities to suddenly come together to start working on coordinated solutions. There need to be teams of people helping them to get there.”