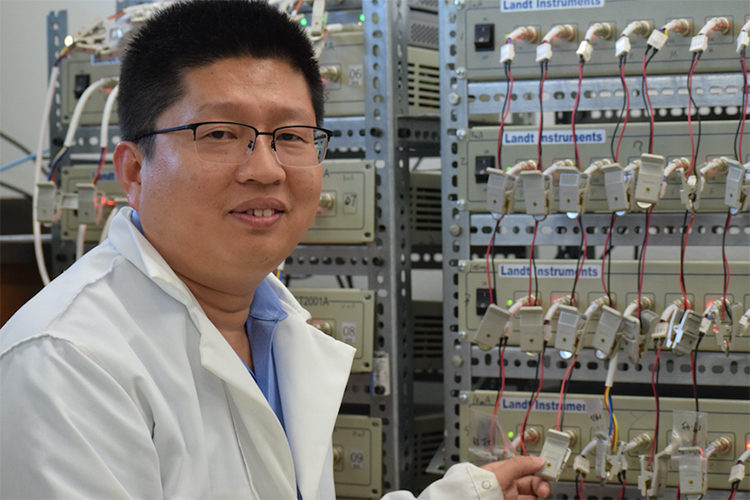 The germanium composite developed by UWM engineer Junjie Niu can operate much better than current technology in a variety of temperatures, improves the battery cycling life, and can be produced with existing processes at room temperature. (UWM photo)

What if you could charge your smartphone in three minutes or your electric vehicle in just 10?

Such speedy charge and discharge capabilities are on everyone’s wish list for next-generation, rechargeable lithium-ion batteries. And the future is closer than you might think.

Junjie Niu, an engineer at the University of Wisconsin-Milwaukee, has created an electrode material for lithium-ion batteries that not only allows rapid charging without damaging the battery, but also delivers markedly higher capacities and packs far more energy than current technology.

Niu’s electrode material would allow consumers to use their devices longer and drive electric cars much farther between charging. It also would open the door for commercializing new uses for the force created when energy is discharged all at once – enough power potentially to launch rockets into space.

Niu’s 2D hybrid composite material consists of an ultra-thin layer of germanium oxide (GeO) on top of Ti3C2 MXene, a ceramic material that has a similar structure to graphene, the conductive wonder material that is significantly more expensive.

The germanium composite also can operate much better than current technology in a variety of temperatures, improves the battery cycling life, and can be produced with existing processes at room temperature. The research was published recently in the journal ACS Nano.

Finding the right material “recipe” for the batteries’ electrode chemistry involves creative thinking along with considerable trial and error, said Niu, an associate professor who has filed six patents and invention disclosures on lithium-ion battery materials since joining the UWM faculty in 2014.

“The active material in the electrodes, the anode and cathode, is the key,” he said. “Better performance has been difficult to achieve because when one trait is improved, it’s often at the expense of a different, but necessary, trait.”

Through his startup, Niu Energy, and collaboration with battery companies, including Clarios, and two national laboratories, Oak Ridge and Argonne, Niu is documenting the fundamental properties of the molecules in electrode materials needed for next-generation lithium-ion batteries.

Because of the conductivity of its components, Niu’s GeO anode material almost doubles the battery’s capacity compared to the conventional graphite material and lasts over the same 500 cycles. But it also provides more raw power, expressed as watt-hours per kilogram (Wh/Kg).

Li-ion batteries show higher energy densities compared to other battery technology today, Niu said. But most have a Wh/Kg of less than 200. Niu’s GeO material has the potential to deliver more than 300 Wh/Kg, meeting the target density set by the U.S. Department of Energy for next-generation lithium-ion batteries.

Germanium, however, takes in so much lithium during charging and discharging that it physically swells and shrinks, causing it to deteriorate quickly. Niu and his team members have solved the problem by structuring their GeO material to accommodate the expansion changes.

“The inside layers are very thin, less than 50 nanometers, allowing room for the expansion,” Niu said. “The germanium oxide on the surface is amorphous, so it’s more flexible than a crystalline form.”

In addition to his research into germanium anode materials, Niu’s recent work has involved the other most promising element for meeting higher performance goals in anodes – silicon. Like germanium, silicon absorbs more charge compared to the graphite-only anodes used in over 90% of available lithium-ion batteries and it can double a battery’s capacity.

The reason so little silicon can be used is that it causes the same volume expansion problem as germanium. In recent work, however, published in ACS Nano in December 2019, Niu developed another structural remedy.

He created micro-sized silicon skeletons that are caged in a conductive polymer “skin.”

The hollow skeleton configuration provides enough space for the drastic volume expansion, while the conductive polymer serves as a protective layer and fast channel for lithium and electron transport. Like the GeO material, this silicon material also can be manufactured affordably with current industry processes.

Niu has found that the silicon, a semiconductor, provides a little more capacity than the GeO material. But because the latter is metallic, it transfers electrons faster, making rapid charge and discharge possible.