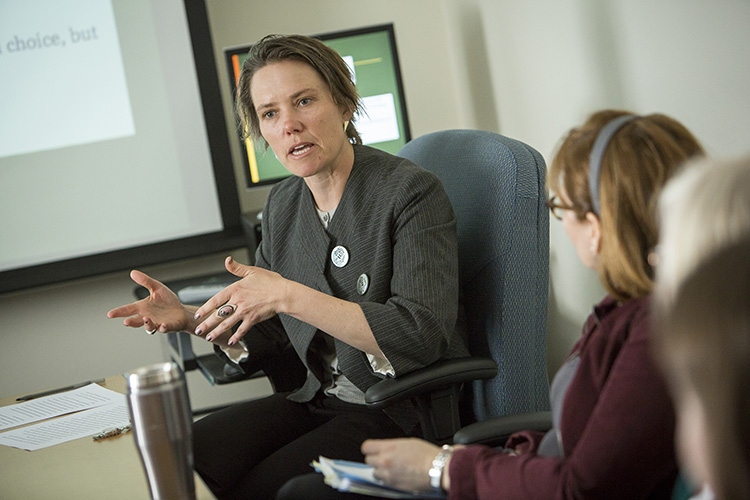 Loyd is an assistant professor of public health policy and administration in the Zilber School of Public Health and a member of the Urban Studies faculty at UWM.

She talked about her research, the root causes of violence and the effects of policing and politics.

How did you get interested in this subject of violence and public health?

My background was in geography and anthropology, so I was interested in how places affect people’s health unevenly. I earned a master’s and doctorate in geography at the University of California, Berkeley. My research there on health, violence and grassroots mobilization for health and social justice led to a book (published in 2014), “Health Rights Are Civil Rights: Peace and Justice Activism in Los Angeles, 1963-1978.”

What are the root causes of the types of violence we see in cities like Milwaukee?

There are many categories of violence – interpersonal, sexual, structural – that often are treated as if they are discrete or “siloed” from one another. Yet, one of the things that I learned from writing the book is that interpersonal forms of violence are tied to systemic forms of violence, and both reproduce power hierarchies along the lines of race, class, gender and sexuality. In Los Angeles, health activists drew attention to how war was at the root of health harms, not only directly through killing but indirectly through diversion of resources needed for sustaining healthy cities.

In Milwaukee, like Los Angeles, policies and practices that foster racial residential segregation, deindustrialization, attacks on unions and cuts to social welfare and public education are forms of structural violence that result in premature deaths. Heightened vulnerability to violence or health harms is not natural, but political and economic. Structures of racism, economics, gender and sexuality work together to create and concentrate vulnerability among particular groups of people.

That study, “Transforming Justice: Rethinking the Politics of Security, Mass Incarceration and Community Health,” was funded through a 2014-’15 Center for 21st Century Studies Transdisciplinary Challenge grant and recently through a Fromkin Award. The team included faculty, staff and students from history (Rob Smith), public health (Lorraine Halinka Malcoe), geography (Anne Bonds) and film (Jenny Plevin). We wanted to document not only how mass criminalization impacts particular neighborhoods, but also to center discussions of security and health on the perspectives of individuals and communities that are most directly affected.

We began with workshops that explored histories of policing, how ideas about crime and criminality became key to defining and governing so many social and economic issues, and the kinds of investments that make for collective safety, health and freedom. We worked with a group of young people, the Youth Video Collective, to train them in filming and interviewing techniques. They have been using video cameras to tell their own stories and the stories of their neighbors. This summer we will work on collaborative editing, and by the early fall we will be screening their films as part of our goal to continuing the conversations on the kinds of changes especially young people envision for their neighborhoods, their futures and the city of Milwaukee.

Does targeted policing provide a solution to violence in certain neighborhoods?

The dominant media narrative focuses on certain neighborhoods as inherently dangerous with “targeted policing” seen as the best solution. However, that approach imagines that violence emerges from discrete pockets, but ignores how the stigmatization of these same places and people was part of sustained efforts to maintain residential segregation, unevenly fund public schools and social goods, and economically isolate residents of Milwaukee from economic opportunities developed outside of the city.

How do politics affect all these economic and social issues?

With a growing political consensus that mass incarceration is a problem, we are now hearing some politicians talk about job training as the answer. But job training for what? Talking about job training when there are no jobs, much less jobs that pay a living wage, is a cruel and willful misrepresentation of the limited opportunities that are available, particularly for those with a felony conviction. This is where I’m reminded that government job creation and a guaranteed annual income were on the agenda of civil rights, peace and welfare rights movements. These ideas had moderate and even some conservative support, so they are important to remember and try to get back onto the political agenda.