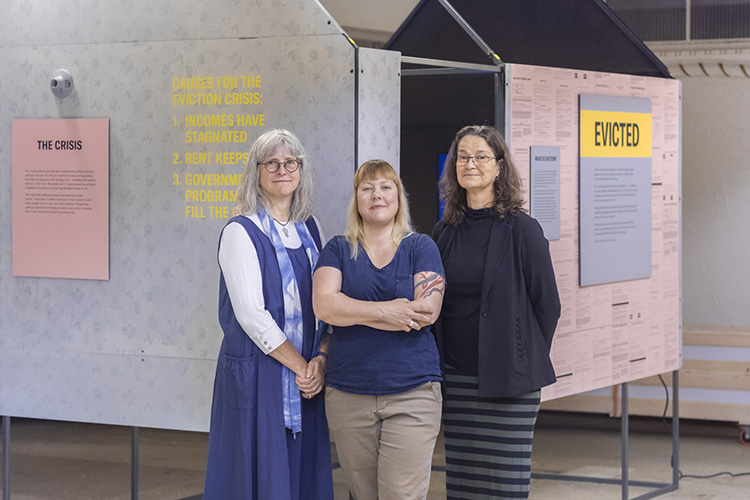 UWM adjunct architecture professors Allyson Nemec (left) and Joy Peot-Shields (right) and Melissa Muller, gallery director for the “Evicted” exhibit at the Mobile Design Box, pose in front of one four “houses” that are part of the exhibit. Each structure, which represents a step in the eviction process, includes infographics, video or other interactive displays. (UWM Photo/Elora Hennessey)

“Evicted: Poverty and Profit in the American City,” written by Matthew Desmond, also helped to provide a real-world perspective into affordable housing issues that UWM professors hoped would shape students beyond the classroom.

The UWM exhibit, “Finding Home – Architectural Solutions to America’s Homeless Crisis,” is the culmination of work from a studio class taught by adjunct architecture professors Allyson Nemec and Joy Peot-Shields. It’s on display at the School of Architecture and Urban Planning’s Mobile Design Box in conjunction with an exhibition based on Desmond’s book.

Using specially commissioned infographics and forward-thinking design, the “Evicted” exhibit introduces visitors to statistics that help explain the causes and ramifications of chronic eviction, according to the National Building Museum in Washington, D.C. The Mobile Design Box is the first stop of that exhibit’s national tour after a yearlong run at the museum ended in May.

Peot-Shields says that she and Nemec already had plans for their “Finding Home” project before learning that the “Evicted” exhibit was bound for Milwaukee. The book, which won the 2017 Pulitzer Prize for general nonfiction, followed families living in the city’s poorest neighborhoods.

“The opportunity to present the student work alongside the ‘Evicted’ exhibit came later, but with our focus on homelessness and housing insecurity it seemed a natural fit,” Peot-Shields said.

The book “Evicted” was required reading for the start of the spring semester. Classroom discussions led to realizations by students that they had personal experiences that tied them to the stories in “Evicted,” even if they weren’t directly affected by an eviction, Peot-Shields said.

The class also included a service component for students with charitable organizations that serve the Milwaukee homeless population.

The models, drawings and other work that resulted from the class were “insightful, grounded and well-conceived,” Peot-Shields said. For example, projects included the designing of a “tiny house,” which is typically thought as 400 square feet or less, as well ideas for a transitional housing complex on Milwaukee’s South Side that allowed for design creativity.

“However, I’m fairly certain if you asked any of us who worked together this semester what was the strongest takeaway,” she added, “you would hear about touchstone experiences during the outreach work and a personal commitment to continuing that work in the community in both their professional and personal work.”

Described by the Pulitzer Prize board as “a deeply researched exposé that showed how mass evictions after the 2008 economic crash were less a consequence than a cause of poverty,” Desmond’s book raised awareness about affordable housing issues across a broad spectrum of professions including architecture.

The current home of the Mobile Design Box, which is a pop-up gallery on Milwaukee’s near west side, is close to some of the neighborhoods portrayed in the book. The gallery space itself is located in a former hospital, which when it closed took with it a source of living wage jobs critical to the neighborhood balance. “I feel it is a perfect location for this powerful exhibit,” Nemec said.

She has seen stories first-hand similar to those relayed in Desmond’s work since she lives nearby in an area with a mix of historic homes and low-income housing.

“A lot of the folks that are in the apartment building close to me – I could see the stories. I could read the book and know that there are people like that right in my neighborhood, which is really powerful,” Nemec said.

The Mobile Design Box is an initiative of UWM’s School of Architecture and Urban Planning aimed at building community while showcasing school research and design work alongside creative local artists and entrepreneurs.