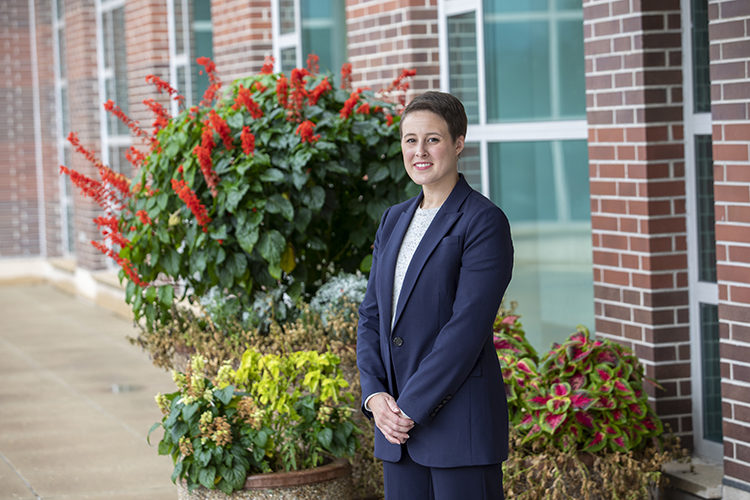 A visit to a coffeeshop prompted some research into giving by Katherine Du, an assistant professor of marketing at UWM's Lubar School of Business. (UWM Photo/Troye Fox)

While purchasing coffee a few years ago, Katherine Du noticed the unusual way that the café’s baristas were eliciting tips. Instead of one jar, two jars sat side by side on the counter. One was labeled “Star Wars” and the other, “Star Trek.”

Soon, she began to see this method applied to charitable giving too. For example, the American Society for the Prevention of Cruelty to Animals used a campaign that invited donors to express their preference for either “dogs” or “cats” while making their pledge.

Du, a UWM assistant professor of marketing, wondered if framing the act of giving as a choice between two options worked better than the traditional request – and, if so, why.

So she and two colleagues conducted a study of the strategy, which they called “dueling preferences,” and found that the method not only attracts more givers but also significantly increases the amounts they give.

How come? The researchers found that the tactic is effective because it allows people to reveal something about themselves through spending.

“Neurological studies have shown that we feel rewarded when we get to share something about who we are,” Du said. “That’s the psychology that this approach is leveraging. People love to express themselves so much that they’re actually willing to pay for an opportunity.”

The secret of the dueling approach’s success didn’t surprise Du, whose main research interest is how consumers use products and other offerings in the marketplace to symbolize or express their identity. What she didn’t expect was the magnitude of its effect.

In an experiment in a café, the research team, which included Jacqueline Rifkin at the University of Missouri-Kansas City and Jonah Berger at University of Pennsylvania, found that compared to the standard method, the dueling preferences approach increased the proportion of tippers from 40.9% to more than 77%. It also more than doubled the total amount of tips raised during a business day.

The researchers also tested its application to charitable giving. In an experimental online campaign for the American Red Cross, potential donors either saw a typical appeal or they saw a “chocolate versus vanilla” appeal. The total amount raised by those who saw the duel jumped 28% over results for those who saw the standard method. And the number of donors rose from 37.4% without the duel to 54% with it.

“This simple intervention was astonishing,” she said. “I thought we would see an effect, but not to that extent.”

However, Du and her collaborators discovered that, for the tactic to work, it has to be implemented thoughtfully, with several considerations that can make this strategy more or less effective.

First, the choices have to be relevant to the participating population, Du said. That’s why the researchers found no effect when they presented dueling tip jars labeled with the letters “A” and “B.” The topic of the duel needs to feel identity-expressive to the target group. Are you a winter or summer person? Do you prefer the mountains or the beach?

Topics like sports and pets usually work well because those interests are widely relevant. But the effect would be diminished if the targeted group was one unlikely to be pet owners or sports enthusiasts.

Controversial topics should be avoided. For example, the researchers tested a “Democrats versus Republicans” duel close to the 2016 presidential election, which proved ineffective because many participants felt hesitant to express an opinion.

Finally, people do not always feel a need to express themselves. This desire to self-express can be quieted if we’ve already had the chance to do it.

The paper was published online in the Journal of Marketing in June.