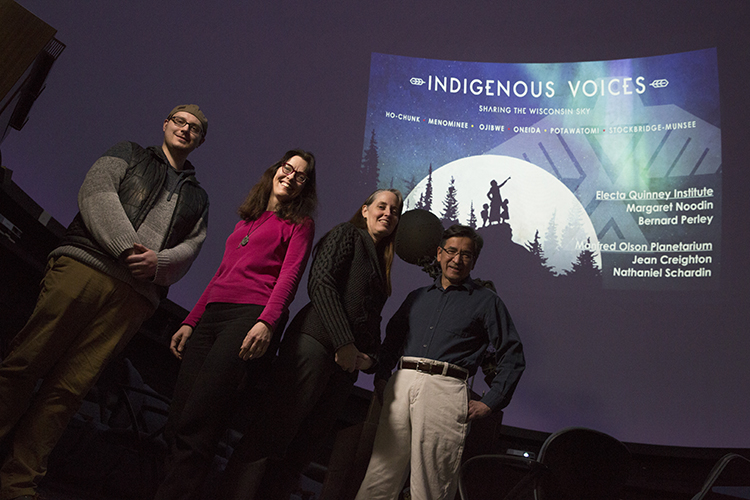 Each of Wisconsin’s 12 Native American nations has its own word for “star.” They share one night sky, but each nation has a distinct way of looking at the cosmos.

Each presentation will feature the origin story of the six nations, traditional music, images and star stories during indoor stargazing.  In addition to the UWM hosts,  guest speakers from various parts of Wisconsin will share their stories. The series will be presented every Friday from March 23 through May 4, at 7 and 8:15 p.m. Tickets are $5 and can be purchased in advance at the planetarium website.

No one anticipated the project’s scope when Jean Creighton, director of the planetarium, initially reached out to UWM’s Electa Quinney Institute for American Indian Education about a collaboration.

“So much of that cultural heritage has been lost. It was sobering for everyone,” Creighton said. “We had to shift our focus to rediscovery and to saving what we can. We couldn’t find many constellation stories. Even finding the word for stars in some languages was very hard. This project became about holding on to things that might have been lost forever.”

Through the institute, a group of Native American undergraduate students conducted research to document their nations’ celestial words and stories.

“Some students were raised knowing bits of their language. Others had to connect with elders from their communities,” said Margaret Noodin, director of the institute and associate professor of English, who organized and guided the research. “Because of the process of colonization and settlement, Wisconsin’s nations have retained their traditional language and ecological knowledge at different levels.”

The researchers worked with the planetarium to archive their findings in a public presentation.

“We’re pushing our undergraduates to take their culture seriously and to take ownership of their knowledge,” Noodin said. “One student had never before looked into her nation’s heritage language. This project triggered a connection for her.”

Noodin, the students and Bernard Perley, an associate professor of anthropology who worked on the project, will speak during the shows to share their findings. During each program, there will be samples from the languages of all six nations. Depending on the guest speaker, each program will also have an emphasis on a particular nation or theme.

“Very frequently, people think of Native American culture as part of the past,” Noodin said. “This show connects the past to the present in a really meaningful way. Hopefully, people come away with the understanding that Native Americans are a part of our city and our state. We look forward to sharing the night sky with everyone.”