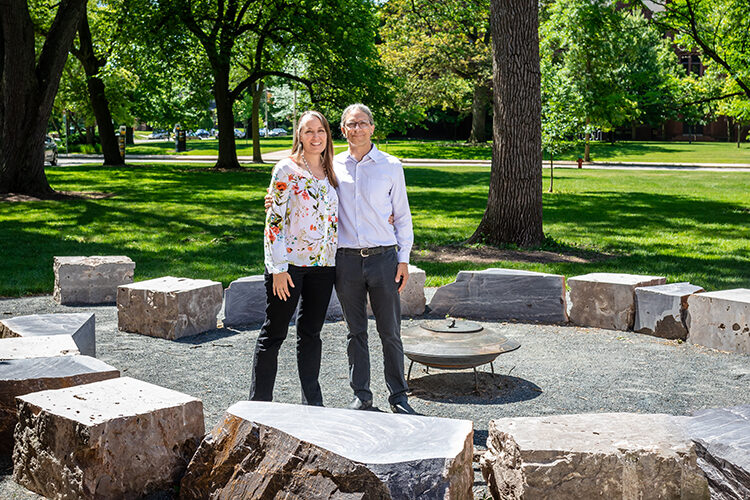 Mark Freeland, the new director of the Electa Quinney Institute at UWM, stands with Margaret Noodin, who had directed the institute since 2014, in the newly installed fire circle in front of Merrill Hall. (UWM Photo/Elora Hennessey)

Bader Philanthropies is providing a $3 million grant to the UWM Foundation for UW-Milwaukee’s Electa Quinney Institute for American Indian Education.

Eroded state budgets and depleted funding sources have reduced staffing and forced cuts to Electa Quinney’s programs, threatening the ability of the institute to continue as a regional leader in Indigenous cultural education. The five-year grant of $3 million will help the institute continue to advance the research, culture and languages of Wisconsin’s Indigenous people.

This grant will strengthen the institute and provide for the hiring of additional Indigenous faculty researchers and instructors. The gift will also provide for programming, including visiting elders, fire circle events, community and international convocations for Indigenous peoples and allies, and scholarships. UWM will continue to seek additional philanthropic funds to build up the Electa Quinney Institute’s endowment.

“The Electa Quinney Institute offers UWM’s Indigenous students, faculty, staff and friends a special space to learn about their heritage and create bonds with others in the Native American community,” UWM Chancellor Mark Mone said. “Bader Philanthropies’ gift to the institute comes at a crucial time. With this gift, we can expand the institute’s impact in preserving and advancing Native languages, cultures and traditions while advancing a greater understanding among Indigenous and non-Indigenous people at UWM and beyond.”

Sarah Gordon Altiman, a PhD student in urban education at UWM, is one student who has personally benefited from the institute. She is a member of the Red Cliff Band of Lake Superior Ojibwe and honors strong family ties at the Fond du Lac (Minnesota) Band of Ojibwe as well.

“I’ve been allowed to really very specifically go into Indigenous issues in every course that I’ve taken,” Gordon Altiman said. “Having that extra support from EQI has been hugely important for me. There is a desire in our students not only to learn academically, but also to learn their culture when they have been detached for so long. Meeting that need is just as important as the academic part because of the sense of loss. EQI is fulfilling that need on top of the academic needs.”

This grant will allow Electa Quinney to continue to be a model for other institutes of higher education in terms of providing unique physical spaces, such as the fire circle located in front of Merrill Hall, and resources to support the revitalization of regional languages, including Ojibwe, Potawatomi, Oneida, Menominee and Ho-Chunk.

UWM recently hired Mark Freeland as the director of the Electa Quinney Institute and associate professor of anthropology to continue to lead the institute’s efforts.

“Higher education has not been a welcoming place for Indigenous students. By recognizing Indigenous languages, culture and knowledge as coequal systems of thought, UWM has provided a place for Indigenous peoples to reintegrate their cultural learning into their degree programs,” Freeland said. “EQI helps to support Indigenous students, teachers, and administrators to successfully complete their academic programs and prepares them for their chosen fields. In that way we are able to inform a much larger audience on Indigenous knowledge.”

Freeland is Bear Clan and a member of the Bahweting community in Northern Michigan (Sault Ste. Marie Tribe Chippewa). He most recently was at South Dakota State University, where he was the co-coordinator of the American Indian and Indigenous Studies Program, which provided the academic component for the Wokini Initiative, a program to redistribute land grant funding to support Indigenous students. His research critically identifies the role of Indigenous worldview as an integral component of cultural and linguistic translations.

Freeland builds upon the work of Margaret Noodin, who had served as the institute’s director since 2014 and is now associate dean for humanities and professor of English in UWM’s College of Letters & Science. She will continue to teach Indigenous languages for the institute.

“The Electa Quinney Institute’s academic program and on campus activities will transform lives – today and decades to come,” said Daniel J. Bader, president/CEO of Bader Philanthropies. “UWM’s steadfast commitment and leadership in preserving Native languages, cultures and traditions is a significant step forward in helping our community reconcile the shortcomings of the past and creates spaces for healing.”

Over several decades, Bader Philanthropies has given UWM more than $20 million in support of a variety of programs across the university. These areas of support include, among many others, the Helen Bader School of Social Welfare, Helen Bader Endowed Chair in Applied Gerontology, Helen Bader Institute for Nonprofit Management, Helen Bader Concert Hall within the Helene Zelazo Center for the Performing Arts, Sullivan-Spaights Scholarships for Milwaukee Public Schools students with financial need, Arts at Home for isolated seniors, and College for Kids summer camp scholarships for low-income Milwaukee children.