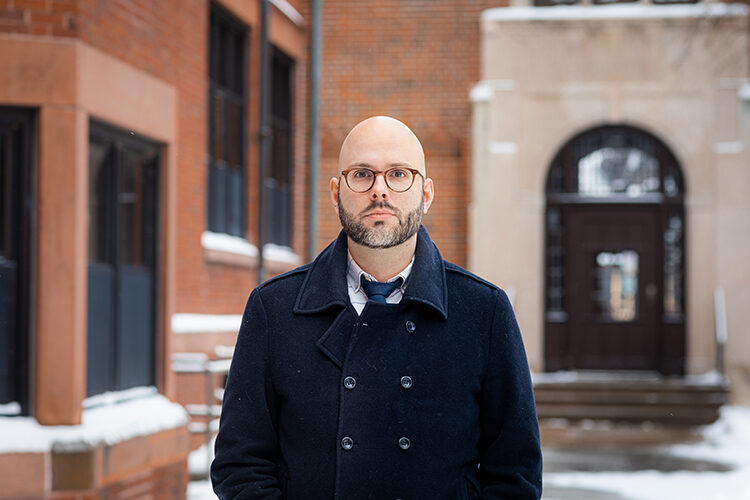 Peter van Elswyk, associate professor of philosophy, recently received a grant from the Honesty Project to define what honesty is in the context of conversation. (UWM Photo/Elora Hennessey)

In a world suffering from the effects of widely spread misinformation, developing ways to foster honesty in ourselves and others offers great value to society. That’s the premise behind the Honesty Project, a research initiative that supports work about the very nature of being truthful.

Peter van Elswyk, associate professor in philosophy, has recently received one of 16 grants from the Honesty Project, which is funded by the John Templeton Foundation and administered by Wake Forest and Carnegie Mellon universities.

Van Elswyk’s research topic is defining honesty as it functions in conversation, what he calls a “conversational virtue.” A problem in defining honesty, he says, is that we use the word “honesty” to describe behavior in a multitude of circumstances, hindering attempts to get at its core meaning.

Below, van Elswyk, who specializes in the philosophy of language, talks about the papers he is working on for the Honesty Project and what he hopes to contribute.

You describe yourself as a linguistic philosopher. What is that, simply?

I answer questions in philosophy with the help of discoveries and theories from linguistics. If the connection between philosophy and linguistics were a Venn diagram, parts of philosophy of language would overlap with parts of linguistics as a discipline.

But one main difference is that philosophers tend to be more interested in broad, timeless questions like, “What is communication?” and “What’s the point of meaning?” Those questions are not specific to particular languages like, say, English. So, the topic of defining honesty fits right in.

What are “conversational” virtues?

There is behavior that is honest or dishonest that happens outside of a conversation, but it seems to me that those instances of honest behavior do not reflect the core notion of honesty. They are outlier cases.

For this grant project, I’m exploring the notion of honesty that emerges from reflecting on honest communication as our primary notion of honesty. So, instead of populating a list of different ways we might be honest and trying to figure out what they all have in common from the get-go, my strategy is to take what I think is the core and then go from there.

What’s another reason that framing honesty within conversation important?

Not all virtues play an important role in helping conversations function properly or smoothly the way that honesty does. If people never told the truth, conversation would not be productive or successful, right? Conversations would not be as effective at helping us get things done through sharing information because the information would be mistaken. And so, for me, that’s a compelling reason why honesty is importantly connected to conversation.

One of your main points is that humility is a special instance of honesty. What’s the connection between them?

How would you like the information in these papers to be used once they’re completed?

One of the practical takeaways I want to stress is that honesty isn’t merely about avoiding lying or a matter of saying what we believe is true. It’s also about accurately representing our confidence in the information we share.

When we’re representing ourselves as being more confident than we actually are, we do a serious disservice to other people. And that’s one place where misinforming happens, whether intentional or not.  Sharing the truth requires sharing our uncertainty too.