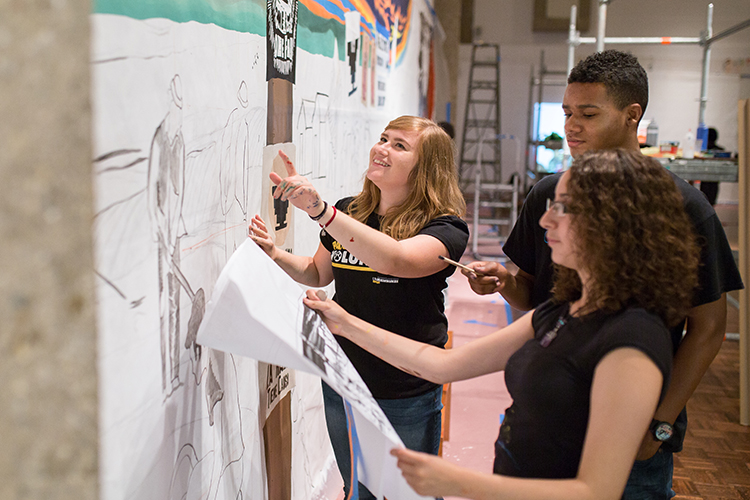 Undergraduate students work on a mural that tells the story of the United Migrant Opportunity Services (UMOS), one of Wisconsin’s leading advocacy organizations for people who lack adequate employment opportunities and social services. (UWM Photo/Elora Hennessey) 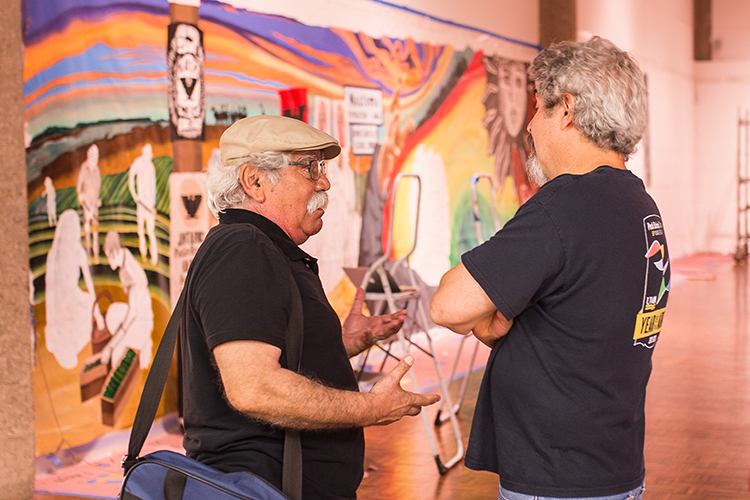 Lead artist Raoul Deal (right) speaks with Jesus Salas, one the activists whose story is told in the mural. (UWM Photo/Elora Hennessey) 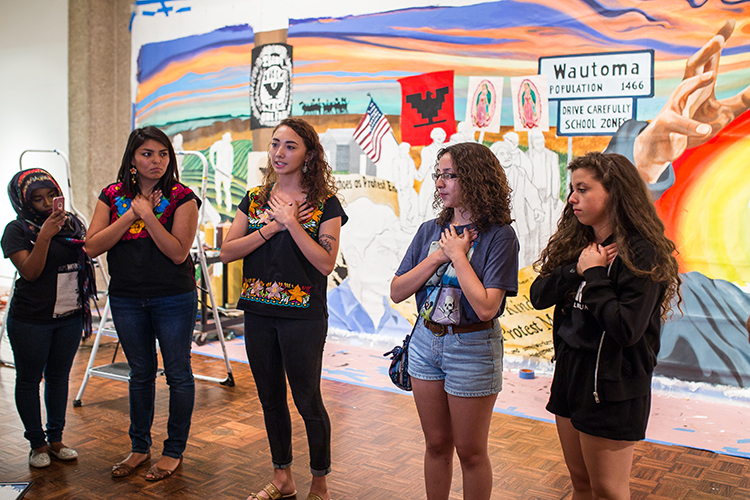 High school interns from ArtWorks for Milwaukee do a unity clap created by migrant workers. The interns worked on the UMOS mural this summer. (UWM Photo/Elora Hennessey)

Their legacy and the 50-year history of UMOS are being honored with a mural and oral history project involving students, artists, historians and a documentarian. Many of the students working on the project are Latino, and lead artist Raoul Deal said the mural will serve as a point of pride for the students and the community where it will be displayed.

“A knowledge of this history is going to benefit them in a number of ways,” said Deal, a senior lecturer in the Department of Art and Design at the Peck School of the Arts. “It kind of grounds them; they know where they came from.”

As part of the project, documentary filmmaker Cris Siqueira has been interviewing some of the Mexican-American immigrant leaders – most of them now in their 70s. The activists helped grow UMOS from an office in Waukesha to one of Wisconsin’s leading nonprofits for employment and educational, health and housing opportunities. The agency also operates in Minnesota, Missouri and Texas.

Students are transcribing the interviews conducted by Siqueira and others. The oral histories will be housed in UWM Libraries’ Archives Department, and the finished film will be available on a web site dedicated to the project.

Deal, who trains students to work in community art, said he was deeply moved by the migrant workers’ stories.

“The migrants started in the humblest of beginnings, and rose to heights through a life of meaning,” he said. “What an incredible example for all of us, especially youth who are struggling today.”

One of the organizers highlighted in the mural is Jesus Salas, who worked alongside Milwaukee civil rights leaders like Father James Groppi. Just a few years after Groppi and other Milwaukee residents demonstrated for 200 nights in a row for fair housing, Salas and other Latino student activists took over the UWM chancellor’s office to demand greater access to higher education for Latino students.

That protest led to the formation of what is now the Roberto Hernández Center at UWM. The center provides academic services to promote Latino student success at the university and in the community.

Michael Carriere, a historian and associate professor of general studies at Milwaukee School of Engineering, came up with the idea of honoring UMOS and its early members. He reached out to Deal because of Deal’s interest in community art.

“It’s been a real joy for me, and I’ve learned a lot about the history that we discovered when we started talking to people,” Deal said. “It’s my belief that stories are important, but they’re only important to people who hear them. And this is a good story, and it ought to be told.”

The project has been carried out by a new partnership between UWM and ArtWorks for Milwaukee, a local nonprofit organization that hires high school students to learn transferrable skills while working on art projects. ArtWorks has been creating public art in the city since 2001. The UMOS project is ArtWorks’ largest mural to date, with interns from 10 high schools working on it.

“It was fun to meet amazing people,” said Fatuma Mohamed, a junior at Rufus King International School. “To do this” – she gestured to the mural – “and raise awareness for our cause.”

Additional support came from the Greater Milwaukee Foundation, the Wisconsin Humanities Council with funds from the National Endowment for the Humanities, the federal Community Development Block Grant program, Milwaukee School of Engineering and ManpowerGroup.

Deal assembled a team of undergraduate researchers, ArtWorks interns and other volunteers. They spent the summer working in the UWM Student Union Art Gallery. When the 9-by-90-foot mural telling the migrant workers’ stories is complete, it will be displayed at First and Mitchell streets. Created with acrylic paint on material made for parachutes, it will be affixed to an exterior wall of the Butters-Fetting building in Milwaukee’s historic Walker’s Point neighborhood.

UWM senior Cinthia Tellez said the activists taught her how progress can come with commitment.

“We learned about the divisions among minorities that we used to have in Milwaukee,” she said. “Now you see more inclusion. They found their struggle no less important than that of others.”