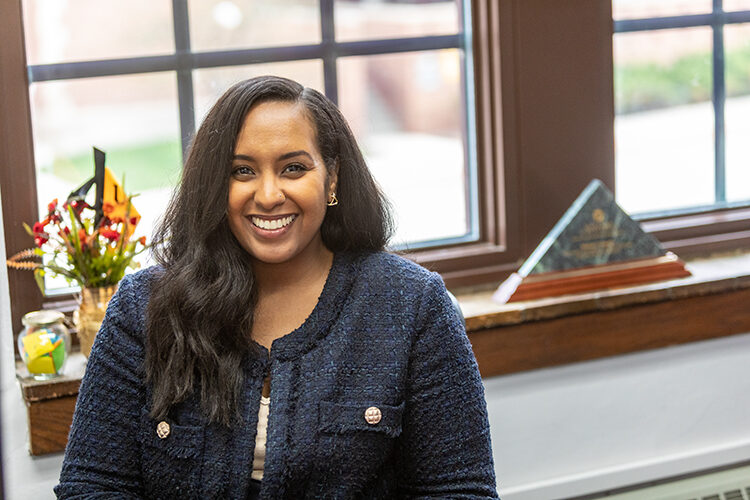 Makda Fessahaye joined UWM in April, after having served as chief human resources officer for the City of Milwaukee. (UWM Photo/Troye Fox)

Makda Fessahaye decided in 7th grade that she wanted to be a lawyer.

Her parents moved to the U.S. from Eritrea before she was born, but it was their experiences that inspired her to start looking at a career in law.

“My family was dealing with some immigration issues, so I realized at that point how critical it was to have a good attorney that really cared about the individual.”

She earned her undergraduate degree in communications at Northwestern University before moving on to Marquette University Law School. “Because I’m Type A and a planner, I just kept going.”

Her law degree eventually led her into a career in administration and human resources.

About the same time, the Milwaukee Business Journal recognized her career and her volunteer work, selecting her for one of the publication’s 2022 “40 Under 40” awards.

Fessahaye’s interest in human resources grew out of law school internships at Milwaukee Public Schools and the Wauwatosa School District.

“That was my first experience in understanding how employment law and human resources work together.” So, when she graduated, she looked for a position that melded both interests.

Her first job out of law school was working for the Department of Corrections as an employee relations specialist. She was eventually promoted to legal counsel for the department.

In January 2019, Gov. Tony Evers appointed her to oversee the Department of Correction’s Division of Adult Institutions, overseeing the state’s prisons and division employees.

“A big part of why I said yes to that position was because Governor Evers had won on a platform of criminal justice reform,” Fessahaye said. “I was asked to lead that area because I was bringing something different to the table.”

In that position, she worked with the legal counsel on issues, but also on policies, protocols and operational issues, with special challenges during the first year of the pandemic. “That’s how I got into the administration side of my career,” she said.

Before coming to UWM, she served as chief human resources officer for the City of Milwaukee and was a member of  Mayor Tom Barrett and Mayor Cavalier Johnson’s cabinets.

She chose to come to the university for a variety of reasons.

“Being from Milwaukee, UWM has always been a background of my childhood. It’s a fixture in the community.” She liked the idea, Fessahaye said, of working with students and those who supported them.

“A lot of my experiences in my career and in my extracurricular activities has been to try to set up the next generation for success,” she said.

She is looking forward to helping the university move ahead on the 2030 Plan, particularly the efforts around diversity, inclusion and excellence.

“Human resources is a big part of that,” she said. “You want to be sure you’re not only recruiting diverse candidates but retaining them.” She said she plans to be actively involved in 2030 strategic plan efforts, focusing on building a workplace where people feel safe and are valued and appreciated. “I really believe a diverse workforce is a better workforce.”

“Like every other company and organization, the ‘Great Resignation’ has certainly impacted UWM. That’s something I know the HR department has been working diligently to try to tackle. So that’s certainly something that is a challenge, but it’s not unique to UWM.”

On a broader scale, she told the Business Journal, one of the concerns for the Milwaukee area is the brain drain. “We continue to lose qualified and talented professionals to other cities.”

On the plus side, she sees a great deal of enthusiasm among employees at the university.

“Just in my couple weeks here, I’ve seen how excited people are to serve UWM. There are so many bright and talented people here that are really committed to the success of the university. I think that’s pretty exciting because not every organization has that.”

In her spare time, Fessahaye enjoys tennis, eating out, traveling and singing in the well-known gospel choir at All Saints Catholic Church.

She also started and runs a brunch networking organization for women. “It gives me an outlet and lets me cultivate women professionals and support local businesses.”

Her community involvement is inspired by many mentors, but particularly her parents, Fessahaye Mebrahtu and Tsebaot Hailemichael. The family includes two younger brothers.