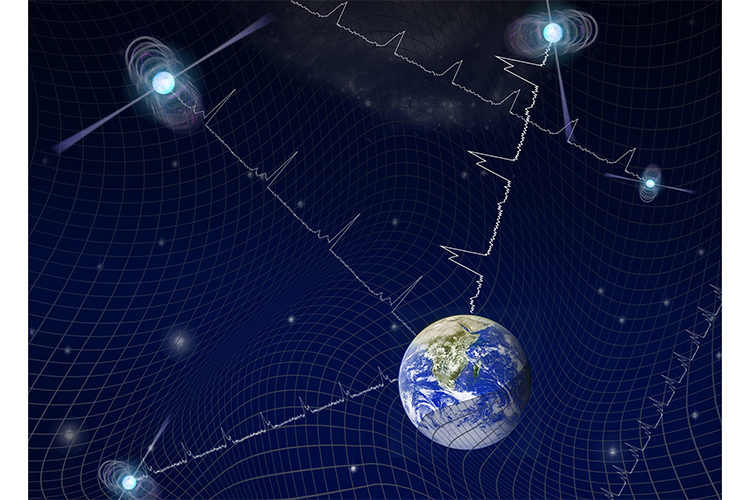 In this artist’s rendering, a set of millisecond pulsars spin rapidly, sending pulses of radio waves at precise intervals toward Earth. Passing gravitational waves interrupt this observed regularity the same way across the set of pulsars. By mining 13 years of data from radio telescopes, scientists have found what may be the first hints of low-frequency gravitational waves produced by supermassive black hole binaries. (Illustration by Tonia Klein)

In data gathered and analyzed over 13 years, the North American Nanohertz Observatory for Gravitational Waves (NANOGrav) has found an intriguing low-frequency signal that may be from gravitational waves, as reported in The Astrophysical Journal Letters.

NANOGrav is a collaboration of over 100 U.S. and Canadian astrophysicists, including a UWM group led by astrophysicists David Kaplan and Sarah Vigeland. The paper was led by Joseph Simon, a postdoctoral researcher at the University of Colorado Boulder and UWM alum (PhD 2017).

“It is incredibly exciting to see such a strong signal emerge from the data,” Simon said. “However, because the gravitational-wave signal we are searching for spans the entire duration of our observations, we need to carefully understand our noise. This leaves us in a very interesting place, where we can strongly rule out some known noise sources, but we cannot yet say whether the signal is indeed from gravitational waves. For that, we will need more data.”

Gravitational waves are ripples in space-time caused by the movements of incredibly massive objects, such as black holes or neutron stars. Astronomers cannot observe these waves with a telescope like they do stars and galaxies. Instead, they measure the effects passing gravitational waves have, namely tiny changes to the precise position of objects – including the position of the Earth itself.

NANOGrav studies the signals from pulsars because they serve as detectable, predictable galactic clocks. These small, dense stars – each the size of Milwaukee, but located thousands of light-years away – spin rapidly, sending pulses of radio waves at precise intervals toward Earth. But gravitational waves can interrupt this observed regularity, as the ripples cause space-time to undergo tiny amounts of stretching and shrinking. Those ripples result in extremely small deviations in the expected times for pulsar signals arriving on Earth.

“NANOGrav has been building to the first detection of low frequency gravitational waves for over a decade, and today’s announcement shows that they are on track to achieving this goal,” said Pedro Marronetti, National Science Foundation program director for gravitational physics. “The insights that we will gain on cosmology and galaxy formation are truly unparalleled.”

In order to confirm direct detection of a signature from gravitational waves, NANOGrav’s researchers will have to find a distinctive pattern in the signals between individual pulsars. At this point, the signal is too weak for such a pattern to be distinguishable. Boosting the signal requires NANOGrav to expand its dataset to include more pulsars studied for even longer lengths of time, which will increase the array’s sensitivity. In addition, by pooling NANOGrav’s data with those from other pulsar timing array experiments, a joint effort by the International Pulsar Timing Array may reveal such a pattern.

“The results we are seeing now are intriguing, but we need more data before we can determine definitively whether we are seeing gravitational waves,” said Sarah Vigeland, assistant professor of physics at UWM. “The next few years are going to be really exciting for NANOGrav as we put together the next data set and search it for gravitational waves.”

Throughout its work, NANOGrav has utilized data from two National Science Foundation-supported instruments: the Green Bank Telescope in West Virginia and Arecibo Observatory in Puerto Rico. With the recent collapse of the Arecibo Observatory’s 305-meter telescope, NANOGrav will be seeking alternate sources of data and working even more closely with their international colleagues. 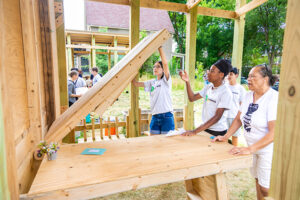