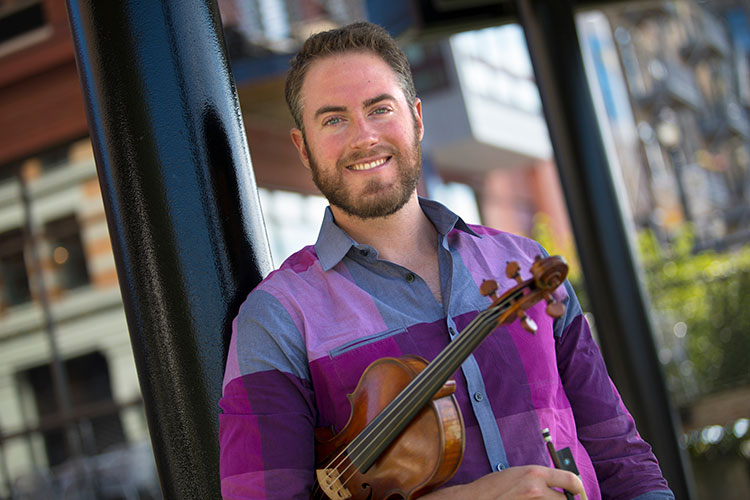 Alum Jared Judge started his company, BookLive, while working on his master's degree at UWM. The Lubar Entrepreneurship Center and New Ventures Business Plan Competition at the Lubar School of Business helped him refine his ideas. (UWM Photo/Pete Amland)

All musician Jared Judge wanted in the beginning was a few more wedding gigs to help pay his way through his master’s degree.

Today, the website he created in pursuit of that goal has grown into a national company employing more than 120 musicians and DJs in seven cities. And, it was named to The Knot’s 2018 Best of Weddings and received a Wedding Wire 2018 Couples’ Choice Award.

Judge grew his business – and his business skills – with the help of UWM’s Lubar Entrepreneurship Center, its Student Startup Challenge and other campus programs, including the New Ventures Business Plan Competition funded by La Macchia Enterprises. He has particularly high praise for Lubar Entrepreneurship Center Director Brian Thompson and Program Coordinator Nicole Green.

“Before I even enrolled in the Student Startup Challenge, they were incredible,” he said. “We had hours of whiteboard sessions. They just gave me a crash course in entrepreneurship.”

Judge enrolled in the Peck School of the Arts in 2015 after completing his bachelor’s degree in music education at Penn State University. He built a website to try to attract bookings for weddings, but quickly realized “this was a much bigger ordeal than I thought it was. I had a lot to learn.”

A self-described “hobbyist nerd,” he had technical skills because he had been building websites since he was in middle school. But he had no background in marketing or actually running a business. A staff member at the Lubar School of Business connected Judge with Thompson, who encouraged him to apply for the Student Startup Challenge.

What do customers want?

The program required Judge to interview dozens of potential customers.

“It’s all geared toward identifying your customers, identifying their problems, and instead of trying to solve them right away, get in front of your customers, talk to them and try to figure out the pain points,” he said. “UWM has helped me feel like I’m understanding the problem and building a solution to the problem.”

The next phase of the program included workshops on specific aspects of creating a business. A brand manager from Colectivo spoke about the evolution of its brand. Another workshop reviewed food safety standards for participants launching food-related businesses. Judge met semi-weekly with his cohort to review progress toward their goals and discuss problems they faced.

“There’s just so many different things pulling you in different directions that you need that accountability,” Judge said.

Putting the pieces in place

A small Student Startup Challenge grant gave him money to have his string quartet professionally photographed and to print posters.

The startup challenge also introduced Judge to the Collegiate Entrepreneurs Organization, or CEO. Winning its 90-second pitch competition gave him another $500 and a trip to the organization’s national conference, where he learned from “tons of different leaders in the field on starting and running a business. There were even some in the music field.”

By the spring of 2017, his string quartet, Dream City Strings, was doing well, and Judge had come up with an idea for another business, BookLive, which would use an Airbnb-like model to connect bands and musicians with wedding and event planners. He partnered with Marquette University student Jordan Hirsch to win third place and $2,000 in the New Ventures Business Plan Competition at the Lubar School of Business and spots in entrepreneurship and business accelerator programs at The Commons and gBeta.

Additional thought and research with gBeta spurred more change. Judge realized that with Dream City Strings continuing to grow and his own performance obligations as a musician, a second business might not be viable. He shut down BookLive last fall, using the lessons he learned from it to make additional improvements to his original business.

One advance was automating playlist generation. For years, all Dream City Strings’ playlists were created by a musician. In January, Judge used his computer skills to create a program that generates playlists based on prospective customers’ responses to a few questions. Customers select the style of their wedding – rustic, chic or industrial – and a genre of music. The computer program does the rest.

“The algorithm knows which songs go well together and which songs flow into each other,” Judge said. “We’ve always been helping people create their playlists. People say, ‘Hey, I want ‘Perfect’ by Ed Sheeran,’ and we do our best to make that happen. This streamlines that process.”

Judge also realized that string quartets are fundamentally local businesses. He created a new partnership with Keaton Viavattine, a student at the Eastman School of Music in Rochester, New York. They established quartets in seven cities in New York and the Midwest. Judge uses his skills as an orchestral conductor to audition members, and he and Viavattine manage bookings remotely.

The New Ventures competition also connected Judge with James Mueller, a local angel investor who recently put up $100,000 to become the third partner in Dream City Music. The two met at a Lubar School of Business Advisory Council meeting that Judge attended as part of the competition. Mueller’s investment gave Judge and Viavattine a mentor with strong business connections and allowed them keep investing in marketing and software development. They recently relaunched BookLive as a website where musicians can log in and use Dream City software to manage their own performances, playlists and payroll. Most features are free with a small fee for payroll functions.

Thompson, the director of the Lubar Entrepreneurship Center, said it was an honor “to work with bright UWM students like Jared.”

“We’re pleased that we’ve been able to help him along his entrepreneurial journey and give him the tools to identify problems and understand solutions. His story demonstrates the type of entrepreneurial thinking that we’d like all UWM students to learn through the Lubar Entrepreneurship Center.”