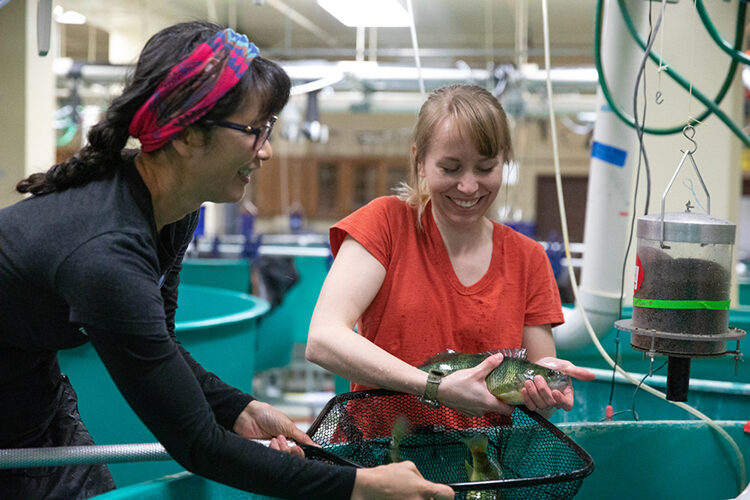 Dong-Fang Deng (left), professor of freshwater sciences, and undergraduate Emma Kraco wrestle with some adult yellow perch in the lab where they research ways to improve the diet of farm-raised fish. (UWM Photo/Troye Fox)

When Dong-Fang Deng and her students make feed for the fish they raise at UWM’s School of Freshwater Sciences, they often use ground fishmeal – dried fish parts from fisheries or wild catch – as the protein source.

It’s possible to find microplastics in commercial fish food, she said, because the wild fish that end up in fishmeal consume some of the microplastics that litter the waters they live in. But after Deng actually spotted tiny plastic beads in pre-ground fishmeal, it prompted a question.

“We wondered, ‘If the fish eat the microplastics, could the particles accumulate inside their bodies?’” said Deng, professor of freshwater sciences who researches the role of diet in fish farming, or aquaculture.

Despite a growing amount of microplastics in lakes and oceans, very little is known about how fish are affected internally by these tiny particles, which range in size from about a flake of ground coffee to the width a of human hair.

The research team conducted a nine-week experiment to see if they could find some answers.

“We chose yellow perch because they are a favorite fish of people living in the Great Lakes region, and the reduced supply of wild perch has driven commercial aquaculture,” Deng said.

Juvenile yellow perch were fed four meals daily with feed contaminated with medium and high concentrations of microparticles of high-density polyethylene, a common plastic. A control group ate feed that was plastic-free.

At the end of the exposure period, none of the fish eating contaminated food had died and the microplastics had passed out of their bodies and showed up in their feces. That’s good news, right?

Not so fast, said Deng.

After the microplastics were excreted, exposed fish contained lower amounts of protein and minerals than fish fed the diet with no HDPE added, she said. This could be evidence that the fish’s bodies were not able to break down the microplastics and needed more nutrients than normal to expel them, or the microplastics might have reduced the absorption of these nutrients from their diets.

The researchers also found evidence of altered liver function in exposed fish and a change in their gut microorganism community. Like it does in humans, the fish gut microbial community performs essential tasks like food digestion and immune system protection.

“So, even though they didn’t get ‘stuck’ in the body,” Deng said, “that doesn’t mean the exposure to microplastics wasn’t harmful.”

Ryan Newton investigated the impact of microplastics on the gut microbiota of the perch and said the study raised more questions than it answered. The differences the researchers observed occurred in medium and high concentrations of contamination, said Newton, assistant professor of freshwater sciences and a coauthor on the paper.

“I’m not sure what to make of that,” he said. “We do see a fair amount of variability from gut to gut in the fish themselves.”

What the fish eat can change the microbiota found in their digestive systems – just like it does in people, he said. But it’s difficult to determine, in the study’s time frame, if the changes were linked to the microplastics.

“We’ve confined the variables to a very, very small question in this study,” she said. “It’s possible that plastics at different sizes or with long-term exposure could have different results. Or that exposure to internal microplastics may have different effects on other kinds of fish.”

In terms of human consumption, it may be that yellow perch that ingest microplastics may simply have a bit lower nutritional value.

“My focus in aquaculture is on feed and seafood quality and safety,” Deng said. “So the question about any contaminant, not just microplastics, is whether the fish being fed are healthy – and that’s related to human consumption.”

The study’s paper was recently published in the journal Animal Nutrition.