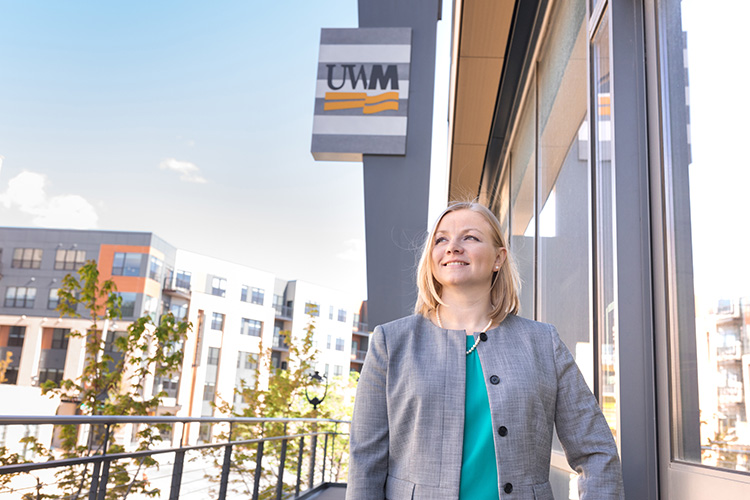 Helen Meier, an assistant professor in UWM's Zilber School of Public Health, is using the funding from her Shaw Scientist Award to investigate the effect of flu vaccines on the immune systems of older adults. The award is given by the Greater Milwaukee Foundation. (UWM Photo/Elora Hennessey)

After a record number of influenza deaths during the 2017-18 season, federal health officials are working to develop a universal flu vaccine that people would get only once in a lifetime as a way to boost participation in vaccination.

But before that happens, scientists need to answer a key question: Why do some older adults respond well to annual flu vaccines and others don’t?

“A universal vaccine would provide broad protection for all age groups against multiple strains of the flu virus,” said Helen Meier, an epidemiologist at the University of Wisconsin-Milwaukee. “But it may not be successful if we don’t first understand the aging immune system.”

It’s a complex problem that involves multiple factors interacting with one another, said Meier. The answer also is important because older people are those most likely to have serious complications from getting the flu.

Meier, who researches the aging of the human immune system, was recently awarded funding with a Shaw Scientist Award from the Greater Milwaukee Foundation. She will use the grant funding to determine how a person’s first exposure to the flu virus affects how their immune system responds to influenza later in life.

She hopes to detangle the variables that influence how well seniors respond to flu vaccines.

Evidence is mounting that three factors are at work, including the strain of flu virus you are first exposed to as a toddler, the extent of your natural decline in immune function, and whether you have a different chronic infection, called cytomegalovirus, or CMV.

One part of the puzzle is that older adultshave a stronger immunity to the specific type of influenza strain they were first exposed to. The annual flu vaccine involves injecting an “inactivated” virus into the body where it stimulates the immune system to make protective antibodies that will fight the illness if it takes hold. The next time a flu virus invades, the immune system more quickly springs into action.

But some individuals do not produce the expected protective immunity to annual flu vaccines.

“When you are vaccinated for a strain similar to your first flu exposure as a child, you may preferentially produce immunity to your first flu instead of the vaccine strain, resulting in less protection to the current circulating flu strain,” Meier said.

The effect of a common virus

Another variable is CMV, a common herpes virus that spreads through contact with bodily fluids, such as saliva. The Centers for Disease Control and Prevention estimates that more than half of adults in the United States are infected by age 40, and for the vast majority, there are no symptoms.

But having CMV plays a role in the decline in immune function with age, Meier said, and it makes the infected person more vulnerable to a host of diseases.Meier hypothesizes that the effect of CMV and an aging immune system on a person’s flu vaccine response will vary depending on the kind of virus they were first exposed to.

Meier is using a unique data set for her research – blood serum samples from nearly 300 participants in the Detroit Neighborhood Health Study, which was funded by the National Institutes of Health and conducted between 2007 and 2013.

A different strain of flu virus

The timeframe makes the data pool significant: The strain of flu virus that appeared in the 2009-10 season was dramatically different from the strain in previous years.

People who had responded well in the past were suddenly more vulnerable to this strain of the flu, even if they had gotten the vaccine. The exception were people whose first flu exposure was to the type similar to the one in the 2009-10 outbreak.

Meier will be able to examine whether CMV plays a role in adults’ immune response to flu, whether biomarkers of an aging immune system changed the effect of CMV on immune response, and whether the kind of flu adults are first exposed to modified the association between the other two factors.

The 32-year-old Shaw Scientist program supports early-career researchers from UWM or UW-Madison who are working in life sciences and cancer research.