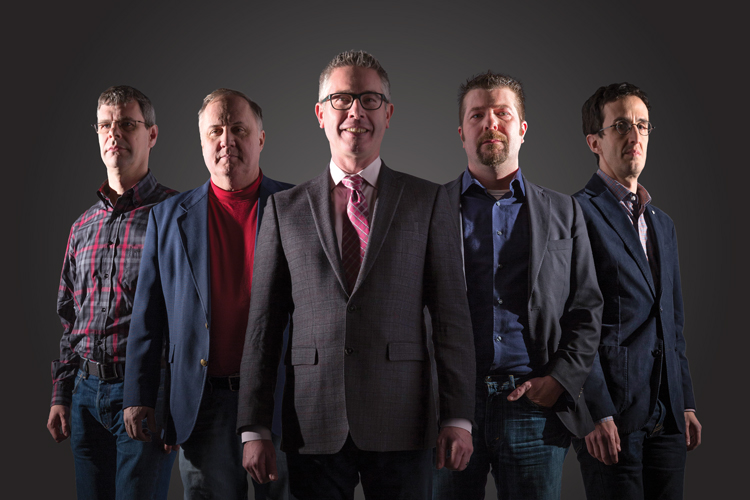 UWM researchers Jolien Creighton (from left), Alan Wiseman, Patrick Brady, Xavier Siemens and David Kaplan are an important part of the international effort to explore some of the deepest mysteries of space. (UWM Photo/Troye Fox)

Nearly two years after a detecting gravitational waves from a neutron star collision, three detectors – the Laser Interferometer Gravitational-Wave Observatory and the European-based Virgo detector – have found waves from two other such sources.

The gravitational waves detected April 25 also appear to be from a crash between two neutron stars — the dense remnants of massive stars that previously exploded. Then, on April 26, the LIGO-Virgo network spotted another candidate wave-source with a potentially interesting twist: It may, in fact, have resulted from the collision of a neutron star and black hole, an event never before witnessed.

“The universe is keeping us on our toes,” says Patrick Brady, spokesperson for the LIGO Scientific Collaboration and a professor of physics at the University of Wisconsin-Milwaukee.

“We’re especially curious about the April 26 candidate. Unfortunately, the signal is rather weak. It’s like listening to somebody whisper a word in a busy café; it can be difficult to make out the word or even to be sure that the person whispered at all. It will take some time to reach a conclusion about this candidate.”

With these new discoveries, the LIGO-Virgo collaborations are realizing their potential of regularly producing discoveries that were once impossible, National Science Foundation Director France Cordova said.

The discoveries come just weeks after LIGO and Virgo turned back on. The twin detectors of LIGO — one in Washington state and one in Louisiana — along with Virgo, located in Italy, resumed operations April 1, after undergoing a series of upgrades to increase their sensitivities to gravitational waves — ripples in space and time.

Each detector now surveys larger volumes of the universe than before, searching for extreme events such as smash-ups between black holes and neutron stars.

“With these observations we are performing a census of the black hole and neutron star binaries in the universe,” said Jolien Creighton, UWM professor of physics. “This census will give us new insight into how massive stars live and die, the origin of heavy elements, the expansion of the cosmos, and it will allow us to perform unique tests of Einstein’s theory of gravity.”

One such event occurred in August 2017: LIGO and Virgo initially spotted a neutron star merger in gravitational waves and then, in the days and months that followed, about 70 telescopes on the ground and in space witnessed the explosive aftermath in light waves, including everything from gamma rays to optical light to radio waves.

In the case of the two recent neutron star candidates, telescopes around the world once again raced to track the sources and pick up the light expected to arise from these mergers. Hundreds of astronomers eagerly pointed telescopes at patches of sky suspected to house the signal sources. However, at this time, neither of the sources has been pinpointed.

Finding the locations of these events soon after the gravitational waves are detected offers scientists the opportunity to gain more information about violent events in the cosmos.

“Even with all of the planning and preparation that we did following the first double neutron star detection, fantastic new telescopes and truly staggering non-stop efforts by astronomers around the world, we couldn’t identify a likely signal,” said David Kaplan, UWM associate professor of physics. “But we are even more excited for the discoveries to come.”

The search for explosive counterparts of the gravitational-wave signal is challenging because of the amount of sky that must be covered and the rapid changes in brightness that are expected, the astronomers said.

The April 25 neutron star smash-up, dubbed S190425z, is estimated to have occurred about 500 million light-years away from Earth. Only one of the twin LIGO facilities picked up its signal along with Virgo (the LIGO detector in Washington state was offline). Because only two of the three detectors registered the signal, estimates of the location in the sky from which it originated were not precise, leaving astronomers to survey nearly one-quarter of the sky for the source.

The possible April 26 neutron star-black hole collision (referred to asS190426c) is estimated to have taken place roughly 1.2 billion light-years away. It was detected by all three LIGO-Virgo facilities, which helped better narrow its location to regions covering about 1,100 square degrees, or about three percent of the total sky.

Researchers at UWM are part of the LIGO Scientific Collaboration, an international consortium of 70 institutions and hundreds of researchers. The UWM team developed the analytical framework and the computational tools to make LIGO’s discoveries possible.