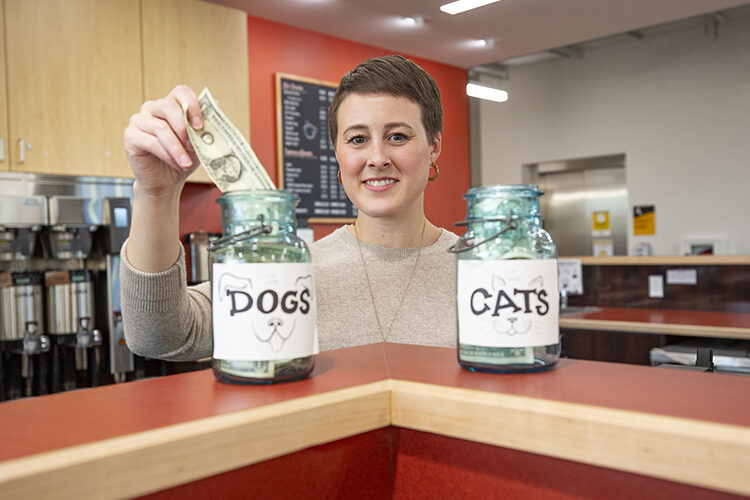 Katherine Du, an assistant professor of marketing in UWM’s Lubar School of Business, says that consumers tip more when given a chance to vote about what they prefer. (UWM Photo/Troye Fox)

Are you a dog person or a cat lover? Like to vacation at the beach or the mountains?

The work of two researchers has shown that human beings are compelled to express who they are and what they think through purchasing. The urge is so strong that it can be leveraged to impact what we buy and to whom we give our money, according to the research from Katherine Du, an assistant professor of marketing in UWM’s Lubar School of Business, and Jacqueline Rifkin, an assistant professor of marketing in the Bloch School of Management at the University of Missouri-Kansas City.

A simple strategy, called “dueling preferences,” frames the act of voluntary giving as a choice between two options and is more effective at raising money than traditional appeals, Du and Rifkin found.

Self-expression through purchasing crops up in other aspects of consumerism too, from a desire buyers have to appear “authentic” to their preference for spending on events that show spontaneity.

On this episode of Curious Campus, UWM’s new podcast about science, discovery and culture, we talk with Du and Rifkin about the study. Below, they answer some questions about their research into what’s behind the choices that consumers make.

Let’s start by clarifying what dueling preferences is with a few examples.

Katherine Du: In cafes, for example, side-by-side tip jars might ask patrons whether they prefer, say, LeBron James or Michael Jordan. And patrons could indicate their preference by dropping their tip into the appropriate jar. Other examples might be dogs versus cats, chocolate versus vanilla, mountains versus beach. These are all “this versus that” choices that we can pit against each other to elicit giving from consumers.

Jacqueline Rifkin: We even stumbled upon a really similar example that had to do with throwing out your trash. There’s a UK-based company called Ballot Bin that has set up public side-by-side trash cans that have questions over the top, like “hamburgers or pizza?” And people passing by can throw their trash or cigarette butts in either of the two compartments, which we thought was super entertaining.

How did you test this?

Jacqueline Rifkin: The two of us camped out at a cafe that was walking distance from the university. Half of that day the business used the normal tip jar and the other half we created a cats versus dogs, side-by-side tip jars. When the cats versus dogs duel was out for display, more people tipped. And then, perhaps not surprisingly, by the end of the day, we had increased the number of people who tipped from 41% with a traditional tip jar to 77%.

Katherine Du: And, as we were kind of playing fly on the wall in this café, patrons would notice the jars and say, “Oh, I love dogs,” or “I love cats.” And they might talk to the barista about it or to another patron in line about it. So it not only increased tipping, but it almost increased the positivity in the cafe.

What does this say about the people who are giving?

Katherine Du: I think there could be an element of competition, but what we really uncovered is that this fundamental drive for self-expression really seems to make this approach effective. But we have to be sure that we’re giving them relevant self-expressive choices if we want this tactic to be as effective as possible.

Jacqueline Rifkin: There’s been some really cool research in psychology and neuroscience showing that when we have the chance to share our opinion, the same parts of our brain light up when compared to when we get a treat or listen to a song we love. It’s just sort of hardwired into us. So I’m more than happy to spend an extra 50 or 75 cents to say, “I’m Team Dog.”

How does this idea of self-expression relate to other kinds of consumer spending?

Katherine Du: Often, we purchase something not for its functional utility, but for what it represents about us. That helps us understand irrational consumer spending patterns and then, of course, for-profit companies can leverage that understanding to reach their goals better.

For example, why do so many people spend money on Yeti coolers? There are tons of coolers in the marketplace, many of which are very effective at keeping beverages cold. But Yeti has this symbolism, right? It’s rugged, it’s tough, it’s outdoorsy. And so people are paying for the feeling of, “This makes me rugged.”

Jacqueline Rifkin: I think we’re seeing a bit of a marketing revolution over the last five or so years. Customer well-being and happiness are all becoming increasingly a priority. What else can companies offer you besides the cheapest price? Can they offer you something that makes you feel good? So I definitely think that the ability to offer happiness, a sense of authenticity, of getting in touch with who you really are is becoming more of a priority.