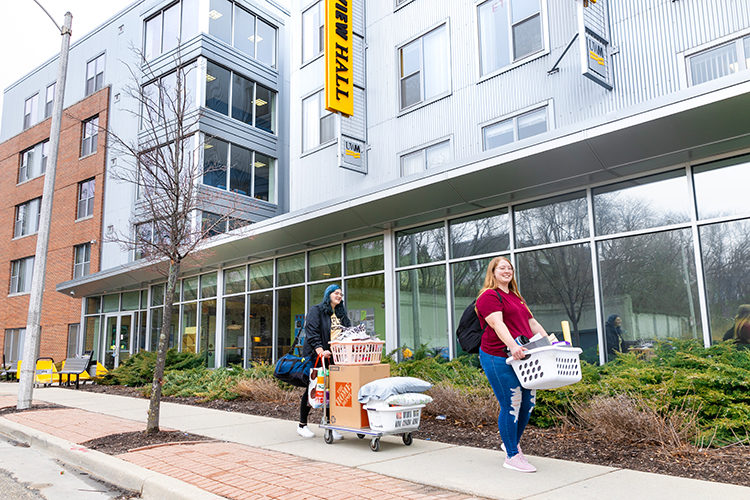 In normal times, University Housing staff has two months or more to prepare for the controlled chaos of thousands of students moving home for the summer.

Suddenly in early March, the staff was faced with the need to plan to move students out in weeks rather than months because of the coronavirus crisis. At the same time, new decisions about the numbers and timing of moves led to the need for almost daily changes in those plans.

Housing staff has been responding to ever-changing needs as the situation escalated from an extended spring break to moving all classes online.

“Literally every single day we were getting another email,” Lobner said. “We realized we needed to be thinking three or four steps ahead. It’s not like we’re moving out 20 students; we’re potentially getting 4,000 students to get out of the halls pretty quickly.” At the same time, the housing staff had to figure out how to accommodate residents who couldn’t leave.

Doing that has taken a huge and continuing effort from everybody in Housing, from administrators to resident advisors, from student workers to web communicators and custodial staff. And, a lot of collaboration with other areas, said Arcetta Knautz, director of University Housing.

“At this point my team has done much of the heavy lifting, but UWM Environmental Services has been a tremendous help,” Knautz said. “The Dean of Students Office and Union Services will help later once we are at a later stage of move-out – packing up the ones who don’t return.”

The move-out is a multifaceted juggling act with many layers, Knautz said, since it’s not just a matter of students coming back to get their stuff.

“We have to maintain social distancing as people move out, and in high-rise buildings with elevators that’s a challenge. We have to store items for those who are away and can’t come back. We need to prepare the buildings for summer conferences if we get the halls back. We need to move in the students who are staying and also maintain social distancing for them.”

Accommodating those who stay

Many of the 179 residents staying are international students or graduate students working on research and projects that are continuing, said Matt Mountin, Housing’s outreach coordinator. He and his team manage communications, including websites, updates, FAQs and email responses to families. That has also included creating, updating and posting online forms so residents could apply to stay or set up move-out times to limit the number of people in the building at one time.

The work involves not just moving students out, but moving them around, Lobner said. Because local and state officials have requested the university make Cambridge Commons and RiverView available for potential hospital space, those two halls are being cleared out, cleaned and disinfected first. Residents who are staying will be consolidated into Sandburg East.

Custodians in the residence halls have been working hard along with everybody else.  “The custodial staff has been wiping and mopping and disinfecting toilets and cleaning door handles,” said Lobner. “I don’t think our doorknobs have ever been cleaner.”

Since those buildings need to be emptied for potential conversion to medical use, housing staff also must figure out where to store items belonging to residents who can’t get back to move their belongings, Knautz said.

Students and parents who are returning to the residence halls to pack up have been calm and orderly, said Amber Detlefsen, a student staff member who works on the Sandburg Service Desk.  She’s a senior biology major from Illinois, planning to graduate in May.

Parents and students are understandably concerned, she added, but students and families have been cooperative in limiting the number of helpers and only coming at assigned times to keep social distancing.

“They recognize we’re all going through a tremendous upheaval,” Detlefsen said. Most of the questions she gets at the front desk are about keys and mailboxes and similar routine details. “Sometimes they have questions we don’t have answers to,” but housing staff members are always available to handle those, she said.

Going above and beyond

Student workers were given the option of staying or continuing to work. Detlefsen chose to stay so she could afford to pay her own rent off-campus and to support the other students she supervises. The desk staff are taking more precautions than usual in wiping down counters and avoiding direct contact, so she is not too worried about her own safety, she said.

Staff members have been going above and beyond, working long hours and thinking creatively, Lobner said. For example, when the Restor in Sandburg closed and food items were no longer needed for planned student gatherings, Rachael Amick, academic and community engagement coordinator, invited students to “come down and eat all this food.”

A parent herself, Lobner has empathy for the concerns of families. She remembers answering an email from a mother who was practically hysterical because she couldn’t leave her own home to help her son get moved out. Lobner talked to her and helped arrange to get the student moved back to Ohio.

“For me, it was super simple and it took half an hour of my life, but for the parent, it was so important to her because she was worried about her son,” said Lobner, who shared the mother’s heartfelt thank-you note with housing staff.

Benefits in the long run

Everyone has been taking on new jobs and helping out where needed to get everything done, said Lobner. In the long run, the experience may have benefits.

“Because we’re in a time crunch, we really have to flex our brains differently, but we’re gaining new skills. No one ever thought we would need to do this, but we’re all going to be better professionals moving forward.”

A special effort at RiverView

Imagine having to move yourself and all of your stuff out of your house in a week.

Oh, and there are 444 people living with you, and you need to disinfect the place.

That was the challenge UWM’s housing staff faced last week in clearing out RiverView residence hall.

“We were here at 5:30 or 6 a.m. every day,” said Rachael Amick, academic and community engagement coordinator, who was University Housing’s point person for the RiverView move-out. Different members of the housing staff took the lead for each of the residence halls.

RiverView faced a particular time crunch in case the state had need for the building. “We obviously want to support our larger community, knowing the role UWM plays in that,” Amick said. Students started signing up for move-out times on Saturday, March 21, and the building was empty within a week.

“We’ve had great collaboration with our campus partners like facilities services and environmental services,” Amick said. They sent custodial staff and moving crew to come over and help us.”

The team tried to have job boards ready by 6 a.m. to put up rooms that were ready to be cleaned, things to check on, residents who needed to move to another location. “Many moving parts at once,” said Amick. “Lots of logistics in figuring out how to do this when we have limited staff, limited time.” And, at the same time, students often worked on a different time frame, not ready to start moving at the crack of dawn.

Like the other residence halls, the RiverView team had to balance speed with social distancing.

“Some magical person did the math on how many we could move each hour – it was like one of those two trains approach the station math problems,” said Amick.

And they also faced the challenge of packing up and storing possessions for students who weren’t able to make it back to campus to clear out.

By Friday night, the building was empty and the crew came in Saturday morning for a final cleaning and room check. Members of the Residence Life professional staff team pitched in Friday and Saturday to help with cleaning and packing.

Amick was planning to get some sleep and then start working on her regular job — planning ways for housing student government and Living Learning Communities to move online.

Said Amick of the past week: “It’s an unfortunate situation, but it has been really cool to see everything and everyone working together.”