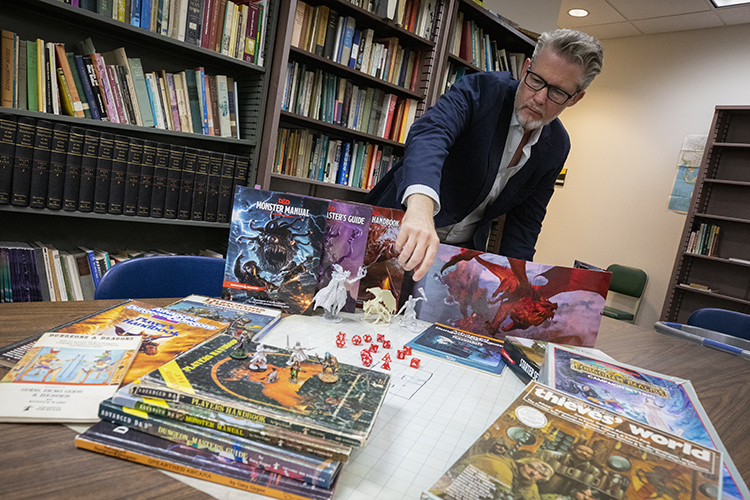 We’re living in a golden age of board gaming, says UWM anthropology professor Thomas Malaby, with some gamers stepping back from the online and high-tech games. (UWM Photo/Troye Fox)

Wisconsin’s roots run deep when it comes to ways to play.

Many taverns have a version of bar dice. Strikes are still being rolled on Milwaukee’s South Side at the Holler House, the country’s oldest sanctioned bowling alley.

The region is the birthplace of Dungeons & Dragons, which appears to be as popular as ever around the world nearly five decades after a Lake Geneva, Wisconsin, man — in collaboration with others in the Midwest — created the fantasy, role-playing game. Those ties helped make southeastern Wisconsin an epicenter for tabletop role-playing games, according to UWM anthropology professor Thomas Malaby.

So what’s with all the fun and games around here? Malaby’s doctoral student, Laya Liebeseller, is so intrigued by this question that it’s the topic of her research.

“It’s so interesting to me how Milwaukeeans in general use games, festivals and playful behavior to bring people together and create community here,” said Liebeseller, who is from Iowa.

Whether it’s rolling a bowling ball or a 20-sided die, such games serve as a lure to bring people together and create friendships.

Or it could also be that there’s something about the culture in southeastern Wisconsin that lends itself to folks being drawn to creating and congregating over games. Maybe it’s a little of both.

“So that is part of what I’m trying to figure out,” Liebeseller said. Also a game designer, Liebeseller plans to study community gaming spaces, like bars that cater to video or board gamers, as well as the history of how games have shaped social interactions.

The Entertainment Software Association said in January that the U.S. video game industry generated a record $43.4 billion in revenue in 2018, up 18% from the previous year, and that about 150 million Americans play video games.

Malaby is part of a group of UWM faculty and students called Serious Play, which is using its own Twitch channel to explore the academic aside of video games. They break down game theory and serve as a venue for gaming scholars to conduct research.

An estimate by the website ICv2, which follows the “hobby game” industry, estimated that there were nearly $1.5 billion in sales in the United States and Canada in 2018, down 3% from the previous year. Hobby games include board, role-playing and dice games.

It was the first decline since the site started keeping estimates in 2013, though sales were still more than double what they were that first year. Sales of board and role-playing games, specifically, had the biggest increases over the past year.

A golden age of board gaming

Malaby describes this time as a “golden age” for board gaming with so many diverse and interesting titles on the market. He suspects that some of that popularity may be due to how information and reviews about games can be easily shared on social media and the Internet.

“I would add too that I think we’re in a moment right now where there’s a bit of techno-skepticism going on,” Malaby said. “We’re stepping back a bit on screens and the Internet.”

Region is a hotspot

Milwaukee is fertile ground. Liebeseller said there about nine independent game stores in the area, as well as the local chain Board Game Barrister. It’s a lot for a metropolitan area with about 1.6 million residents.

The Oak & Shield Gaming Pub boasts on its website that it brings people together with “food, games and geek culture.” Other taverns or gathering spots that appeal to gamers have also sprouted in the area in recent years – and that’s not including more common activities like bowling leagues, bar dice or card games like euchre or sheepshead.

Games are played in public, no longer confined to basements or family rooms.  It’s earned the city the nickname “Nerdwaukee.”

“That is definitely a term that gamers use for themselves and is used fondly,” Liebeseller said.

“‘Nerd’ as a word has kind of become re-appropriated by the nerd community as a mark of pride.”