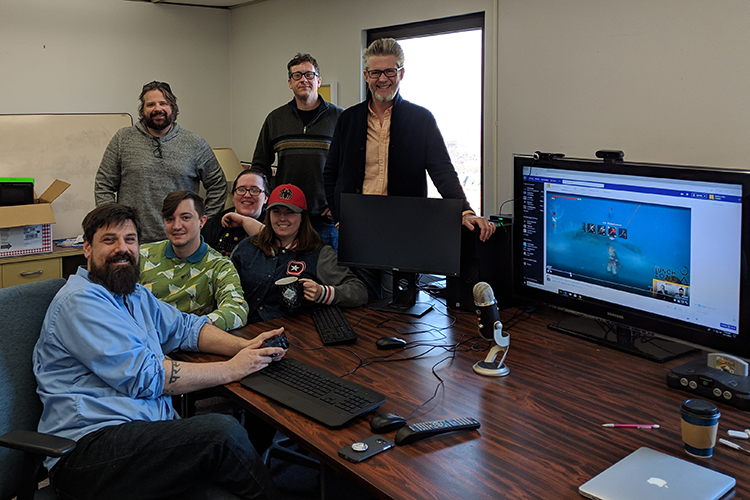 Twitch is a live-streaming Internet platform where worldwide audiences can watch gamers of any stripe playing through their favorite video and board games.

Now, a collection of UWM faculty and students is using their own Twitch channel to explore the academic side of those games.

The group, called Serious Play, brings together UWM gamers from an array of disciplines – English, anthropology, LGBT studies and more. Several days each week, they gather to put on several shows, like “The Cat’s Moustache,” a show exploring collaborative puzzle-solving through traditional adventure games, or “Lunch Zone,” where moderators offer critical analysis of the video game they’re currently playing and spin off on discussions as the live audience adds its own commentary.

Together, the group is breaking down game theory and building up a seed-bed for gaming scholars to conduct their research.

“Gaming is a huge industry. It should occupy a relative proportion of our academic interests just by that,” said Thomas Malaby, an anthropology professor and one of the faculty members of Serious Play. “But there’s a lot of the politics of ‘mere-ness.’ They’re merely games. What’s behind that statement? I’d rather bet on the long proposition that games have demonstrated themselves to be not just economically massive, but a site of real meaning-making for people.”

That’s because video games, just like literature and film, draw on a variety of themes, character tropes, visual mediums and more to create a cohesive experience for the player and audience.

That was always apparent to English graduate student Kristopher Purzycki, one of the founders of Serious Play.

“Serious Play started out in the Digital Humanities Lab at the UWM Library. It was originally a monthly, informal meet-up around a central topic or theme in a computer game,” Purzycki said. “That kind of built into a larger group. Over the course of a few years, we crossed paths with livestreaming technology. … We thought it would be a good toe-hold to both preserve playing games (through recording) but also to distribute those discussions across the public.”

As the group grew, Malaby and his colleague, English professor Stuart Moulthrop, applied for support from UWM’s Center for 21st Century Studies. The center granted them space – they call it the Digital Cultures Collaboratory – on the ninth floor of Curtin Hall, where the group has a computer set up with a bank of monitors and recording equipment so they can stream their discussions.

“The ‘Lunch Zone’ show discussion varies game by game,” said Kelly Brajevich, an English doctoral student and the newest member of Serious Play. “We went really deep into musical analysis one day. One day we talked about creator collaborations.”

“I think it shows what a bunch of scholarly eyes around games, all in the same place, can achieve,” said Malaby. “We’re able to begin and push further some conversations about what’s going on here. Why did this design choice lead to a certain set of outcomes? What does that say about the state of games right now? In what ways are games trying to challenge us? What social commentary is in them?”

The group picks a new game to discuss each week, all based around an overarching theme each month. For example, April was dedicated to games exploring LGBT and queer culture. October was “spooky games” month in honor of Halloween, and November was “cute games” month as a palate cleanser. When Anthony Bourdain passed away, the group focused on video games that involved cooking – “Breath of the Wild” was a popular choice.

Out of those games and discussions has grown a new avenue of research for several students.

“For my own work, a lot of the discussions have led to published articles or articles that are currently under review,” said Joshua Rivers, an anthropology graduate student who focuses on queer studies. The discussions generated during April’s queer gaming month, centering around games like “tranxiety,” which explores the life and experiences of a trans character, generated plenty of fodder for his research.

The importance of understanding

Serious Play has even been invited to present their research at conferences, and recently sat for a panel discussion and roundtable at the Meaningful Play Conference at Michigan State.

This type of study is important, Malaby added, not only because it’s a huge industry – video games raked in more than $36 billion last year, according to the Entertainment Software Association – but also because there are troubling aspects to gaming.

“We are getting (good) at using digital technology to architect a way to command people’s attention, dollar after dollar, hours at a time,” he said. “It’s those kinds of questions around games – that I love – that I think we need to get to the bottom of. What makes them so compelling? What is powerful about them? The better we understand that, the better we’ll make good decisions about them.”