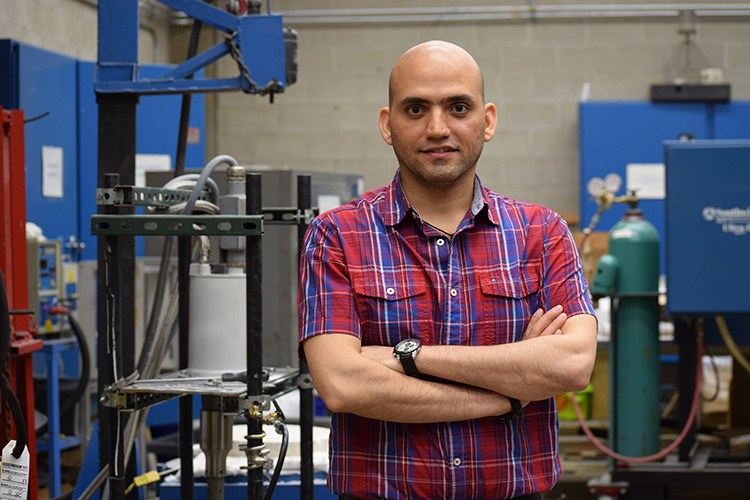 Meysam Tabandeh-Khorshid is moving on to a paid internship with Apple after earning his doctorate in materials science and engineering from UWM. (UWM Photo/Carolyn Bucior)

To find the right university to earn his doctoral degree, Meysam Tabandeh-Khorshid sent about 1,000 emails from his native Iran to professors in the United States, Canada, Australia and a handful of European countries.

“I was looking for a professor who specialized in metal matrix composite materials and mechanical properties of materials,” said Tabandeh-Khorshid, who earned his master’s degree in materials science and engineering from Shiraz University, one of Iran’s top 10 universities. “I heard back from Professor Pradeep Rohatgi, who is very famous in this field, and accepted his offer.”

Tabandeh-Khorshid was one of 267 UWM College of Engineering & Applied Science students to graduate in May. The students came from more than 15 countries, including Egypt, Canada and Serbia. They have accepted jobs with employers including the Wisconsin Department of Transportation, Johnson Controls, Rockwell Automation, Sikorsky Aircraft, Oshkosh Corporation and Kohler Power Systems.

Many students found their jobs through internships they completed during their time at UWM.

Tabandeh-Khorshid accepted a paid internship with Apple in Cupertino, California. Apple’s high level of security prevents him from disclosing job details, but the internship’s appeal was that it will allow him to decide if the work and location are good matches for him, should he receive a full-time offer.

At UWM, Tabandeh-Khorshid worked on developing high-strength, lightweight materials. Such materials could replace heavier components in the automotive and aerospace industries.

California-bound, Tabandeh-Khorshid said he will miss plenty about his life at UWM, including summer in the city, mocha drinks at the Grind, eating Baja quesadillas at the Union Station, watching the Packers, exercising at the Klotsche Center, and playing intramural soccer with FC EMS, a team composed of all graduate engineering students.

He will take with him two T-shirts commemorating soccer wins, a 50th anniversary glass from the College of Engineering & Applied Science celebration, a college lapel pin and something else:

“Memories,” he said with a smile. “Lots of memories.”