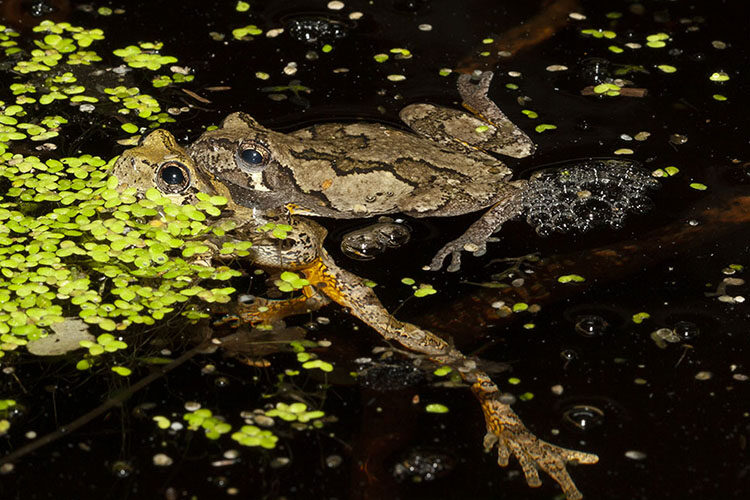 The chosen male frog jumps on the female’s back and she carries him to the pond to mate. Some females can be very quite choosy about which kind of male calls she’ll go for. (Photot courtesy of the Hoebel lab)

In the wild, frog romance is a raucous affair. When it’s time to mate, the female Eastern gray tree frog makes her way to the pond, when there could be hundreds of potential suitors, each calling to her in loud chirps that have different audible characteristics.

In this nighttime chorus, the male aims to charm the female with his particular call. But what makes a call “attractive”?

On this episode of Curious Campus, UWM’s podcast about science, discovery and culture, we talk with two researchers who specialize in amphibian communication – how frogs message each other and then decide how to respond.

Gerlinde Hoebel is an associate professor in biological sciences in UWM’s College of Letters & Science. Michael Reichert is an assistant professor of integrative biology in the College of Arts and Sciences at Oklahoma State University.

Below, they answer some questions about mating calls. Listen to the full show at WUWM.com or on your favorite podcast app.

Set up the tree frog mating game for us. As the female approaches the pond, what are the conditions?

Reichert: There could be hundreds of males out there calling on a good night. It’s very dense and very loud. So, it’s quite a challenge for the female to distinguish between them and try to find the male whose call she prefers.

And we know that females tend to have preferences for certain types of call characteristics. And so, what we are trying to determine is why they have these preferences and also how they manage to then find these mates within the very chaotic chorus.

Why is the competition so fierce?

Reichert: The pond is going to have far more males on a given night than females. If males are able to attract a female, then they’re going to be able to pass along their genes to the next generation. Most females are only going to mate once a summer, but the males could be out there pretty much every night.

Hoebel: Female frogs generally only come to the pond when they’re ready to mate – that’s when they already have a clutch formed, which can consist of hundreds or thousands of eggs. So that requires a lot of energy. It’s really, really hard to do. So many females may only have the energy to produce one clutch a year, and maybe only once in a lifetime because so many of them just don’t live very long. Most of them we collect are only a year old. That’s because many get eaten. Frogs are a very important component of the food chain.

Is there something about this work that has surprised you?

Hoebel: We started by trying to find the characteristics that, on average, most females like best. Now we’re interested in individual female preferences. And we’re really surprised how variable those are. Even for things like call duration. Turns out, there’s a sizable minority of females that don’t think long calls are so hot. We’ve found that almost half the female population we’ve tested think that really fast calls are ugly. But others really love it. So the fact that some females have preferences that are complete opposites blew me away.

So female call preferences fall into a wide range. What’s the significance of that?

Hoebel: The diversity in female preferences does relieve the pressure on males and keeps the variation of male calls alive because then everybody has some chance of success.

How is sexual selection related to evolution of a species?