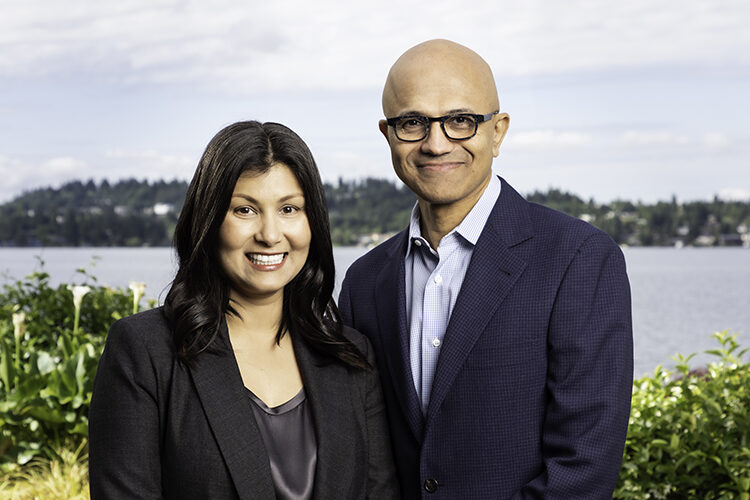 And and Satya Nadella donated $2 million to support the Fund for Diversity in Tech Education at UWM, which helps the university attract, retain and graduate undergraduate students from marginalized communities, preparing them with the skills to pursue high-tech careers. (Photo courtesy of Satya and Anu Nadella)

Despite its widespread use, leading facial recognition software is disproportionately inaccurate in identifying people with darker skin – particularly women – because the algorithms used in the software are largely “trained” on men with light skin tones.

It’s one reason that a career in computer science interests Amya Camberos.

“I want to be a part of a work field where I am able to improve algorithms to be more unbiased,” she said. “Also, as a black woman, I want to use my perspective and experience to improve the diversity of the field. The industry may be growing, but the diversity of minorities is still low.”

Camberos, who attended the Milwaukee High School of the Arts, is one of the first nine recent high school graduates to be awarded full-ride scholarships to study computer science, data science or information technology at UWM. The scholarships are funded through a gift from UWM alumnus and Microsoft CEO Satya Nadella and his wife, Anu Nadella.

The Nadellas’ $2 million gift supports the Fund for Diversity in Tech Education at UWM, which helps the university attract, retain and graduate undergraduate students from marginalized communities, preparing them with the skills to pursue high-tech careers.

Several of the scholarship awardees said curiosity about how computer and video games worked sparked their interest in data science as a profession.

“My interest in computer science came from growing up loving computers and always wondering how they operate,” said Robert Jones, who just graduated from Dr. Howard Fuller Collegiate Academy. “I wanted to know how all of them were made. I also always wanted to create my own games.”

The same was true for Ignacio Vega Rivera, a graduate of Ronald Reagan High School, who said playing a game called Pokemon Emerald as a youngster captured his imagination.

“I thought, ‘there’s something in this Gameboy Advanced, telling it what to do to make this stuff appear and make these sounds play,” Vega Rivera remembered. “I found that amazing.”

In high school, he took an engineering class that introduced him to Scratch, a program used to code games, which cinched his career plans. He said he is interested primarily in studying either robotics or computer programming languages and their applications.

Camberos also had exposure to both computer science and engineering coursework in high school that introduced her to the basics of algorithms, data structure and programming language. She is considering careers in either ethical hacking or robotics.

“I thought about these two career paths not only because they’re fascinating, but I hope to do work that will help others in some way,” she said.

The students said that having the financial support means they won’t have to work while studying in rigorous degree programs.

“I feel like I would have gone to college no matter what because I have a mindset of doing more to get more in my life,” Jones said. “But the scholarship just took a lot of stress off my shoulders.”

The Anu and Satya Nadella Scholarships are specifically for students who graduate from Milwaukee high schools, provide financial and academic support, and cover tuition, fees, room and board for 12 to 15 students for up to five years.

Each recipient will be assigned a dedicated success coach, an academic advisor and a peer mentor, and will be provided additional tutoring and support opportunities to lead to successful student outcomes.

The scholarships are part of a larger initiative supported by the Nadellas’ gift that includes support for pre-college programming and emergency grants to help students successfully complete their degrees.