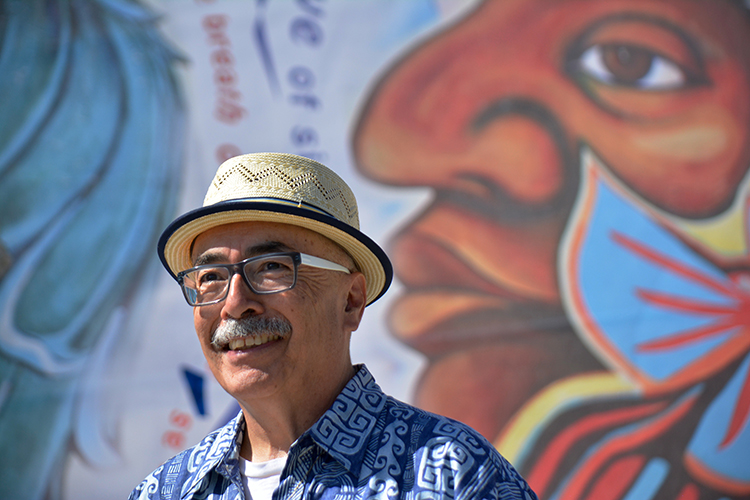 U.S. Poet Laureate Juan Felipe Herrera reads and writes in both English and Spanish. He will share his poetry at UWM on Thursday, March 3. (Photo courtesy of Blue Flower Arts)

For the first time in 79 years, a Latino writer has been appointed the United States poet laureate. On Thursday, March 3, that groundbreaking poet is coming to UWM.

Juan Felipe Herrera is an acclaimed writer spanning several genres, from poetry to young adult novels, to children’s books and mixed genre works. For two years, 2012-14, he served as the poet laureate for the State of California, and this year he’s making history as the first Latino U.S. poet laureate. He will read from his works at UWM in the Student Union Ballroom from 7 to 9 p.m. Thursday. The event is free, and open to the public.

“It’s amazing when you consider that after Caucasians, Latinos are the second largest ethnic population in the United States,” said UWM English professor Mauricio Kilwein Guevara. “That’s a long time for the second-largest ethnic group to be shut out.”

Kilwein Guevara recognized the dearth of representation for Latino poets, so when he was president of the Association of Writers & Writing Programs in 2003, he invited Herrera to be featured at the group’s annual conference. It was there that English Professor Brenda Cárdenas also first befriended Herrera, who later wrote the introduction to one of her poetry collections. It’s thanks to these long-standing relationships that Herrera is now visiting UWM as part of the Boudreaux Reading Series.

“It really is a testament of the quality of the graduate creative writing program at UWM, to be able to attract a transformational figure in poetry,” Kilwein Guevara said. “It is because the institution has invested in this program that we have access to some of the major figures working in poetry and fiction in the United States and internationally.”

Cárdenas is excited for UWM and the residents of Milwaukee to hear Herrera and his poetry.

“The average person often thinks that poetry is inaccessible. They think it’s something they have to study in the university, or they worry that they won’t know how to interpret it and are going to get it wrong. I think Herrera is one of the best people to bring into a situation like that,” she said. “Without you even realizing what he’s doing, he’s going to have you believing that poetry’s not such a strange and foreign thing … That’s one benefit for Milwaukee: People who come out to this event will be able to access poetry through this person who really wants to share poetry with them.”

While neither Cárdenas nor Kilwein Guevara know what Herrera will read, the audience can expect to hear some bilingual poetry. Herrera often writes in both English and Spanish and sometimes combines the two languages in one poem. Audience members should be prepared to participate.

“He’s truly a communitarian – that is, he wants to bring communities, all different groups together,” Kilwein Guevara explained. “Juan Felipe thinks there’s a flavor and a joy whenever we have an opportunity to learn about different cultural perspectives. He really sees the function of poetry as bringing people together.”

Herrera is the author of 30 books, including collections of poetry, prose, short stories, young adult novels and picture books for children. His many collections of poetry include: “Notes on the Assemblage”; “Senegal Taxi”; “Half of the World in Light: New and Selected Poems”, “187 Reasons Mexicanos Can’t Cross The Border: Undocuments 1971-2007”; and, “Crashboomlove: A Novel in Verse.”

The reading is sponsored by the Department of English through the Boudreaux Foundation and the Roberto Hernández Center and UWM Union Sociocultural Programming.