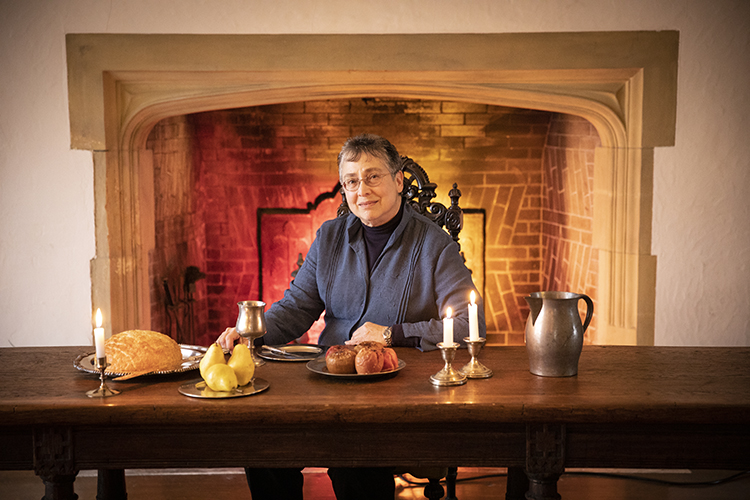 UWM historian Martha Carlin researches everyday life in medieval England, with special interests in London, food, shopping, the household and inns. Then, as now, she says, a festive meal was an essential part of the Christmas holidays. Here, Carlin discusses what foods were eaten by masters and servants in wealthy English households, and how the food was prepared.

Today, we often make a turkey or prime rib as the main course for Christmas dinner. How would the menu have been different in medieval England?

The turkey is native to the Americas, so there were no turkeys in medieval Europe. But those who could afford it ate lots of meat and poultry when the Catholic church allowed it. Meat-eating was prohibited in medieval England on Wednesdays, Fridays and Saturdays, as a form of religious fasting.

Dinner, the main meal of the day, was eaten at midday. In a wealthy household, a grand festive meal would have included four courses. On a “flesh day” (when meat-eating was allowed), the first course was always a hearty pottage (soup or stew), followed by grete flesshe – large, inexpensive joints of beef, mutton or pork, either roasted or boiled. These might be served with boiled or braised seasonal vegetables, such as cabbage or spinach. The elite diners would be served with fine-quality bread, ale and wine; the servants and non-elite guests would be served with coarser bread, second-quality ale and no wine.

For the non-elite diners, the first two courses would comprise their entire meal, but the high-status diners would have been offered the full four courses. The third course featured expensive delicacies, often spit-roasted, such as venison or other wild game; tender meats such as lamb or veal; or poultry, such as pigeons or geese. These might be accompanied by elegant, labor-intensive vegetable dishes, such as creamed leeks. The last course included light and sweet dishes, such as fritters, baked fruit and wafers.

Speaking of sweets, today we make so many it’s hard to avoid them. What about in medieval England?

Seasonal berries and other fruits were beloved by all classes. Some varieties of apples and pears could keep well for months. They could be roasted or poached, spiced and stuffed with raisins or currants. (Fruit pies did not appear until later, when pastry-making was transformed.)

Medieval Europeans craved sugar and other spices. In England, however, spices and wine were very expensive because they were all imported. The imported wine didn’t keep especially well and was often quite sour. Those who could afford it used honey, sugar, cinnamon, ginger, cloves, nutmeg and other spices to make a spiced wine called hypocras (or ypocras), which was the favorite after-dinner drink of wealthy households, comparable to a fine liqueur today. It was often served with sweet or savory wafers – very thin, delicate, crisp cookies made in a “wafering iron,” which was similar to the krumkake iron still used in Norwegian cookery.

What kind of tableware would have been used in a wealthy medieval household?

People drank from cups and ate their soups and stews from bowls using spoons. They ate solid foods from plates, using small, sharp table knives to cut the food into small pieces. The solid foods were often served on top of slices of bread to catch the juices, and they were eaten with the fingers, not with the spoon or knife.

Forks did not appear on medieval tables. People were skilled at eating neatly with their hands, and in wealthy households they were provided with large linen napkins. Elite people ate from expensive dishes made of pewter, silver or (for wine) imported glass; most people ate and drank from inexpensive tableware made of wood or pottery.

How would the lord or lady of a manor have treated their rural tenants at Christmas?

A lord or lady might entertain the male farmworkers and tenants by inviting them to the manor house for a hearty dinner of soup, boiled meat, bread and ale. They would eat this sitting in the great hall, and they could stay on afterwards, drinking and singing songs in the warmth of the fire. When it was time to go, they probably took any uneaten bread and meat home to their families. 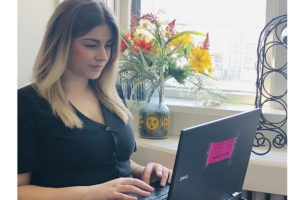 Campus & Community
As classes move online, here’s how students can set themselves up for success