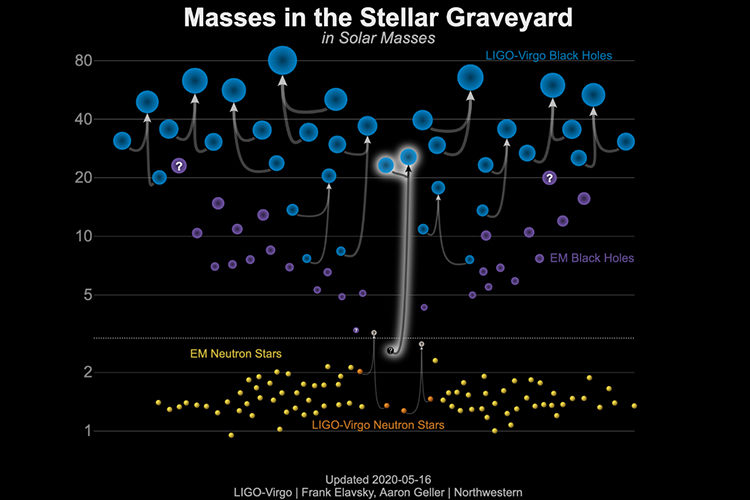 This graphic shows the “solar masses” of detected objects in the stellar graveyard – the area in the population of objects that were once stars devoid of objects between 2.5 and 5 solar masses. These include neutron star mergers in yellow and black hole mergers in purple. Yellow and purple events were discovered using observations of electromagnetic radiation rather than gravitational waves. In blue are the compact mergers between either two black holes or a neutron star and a black hole are that were detected by LIGO/Virgo. There also are two neutron star mergers, in orange, that were detected by LIGO/Virgo. The arrows attached to some indicate they are the individual components of a final, more massive remnant in blue. GW190814 is the one with the white glow around it. (Credit: LIGO-Virgo/ Frank Elavsky & Aaron Geller, Northwestern)

Scientists have discovered an object in a cosmic collision that is denser than previously detected neutron stars but still far less dense than known black holes, challenging the accepted description of neutron stars and black holes, two of the many forms of massive, dying stars in the universe.

Physics professors Patrick Brady and Jolien Creighton and a group of 15 other researchers from UWM’s Center for Gravitation, Cosmology and Astrophysics contributed to the recent paper by the LIGO-Virgo Collaboration published in The Astrophysical Journal Letters that investigated the collision.

The end game of massive stars often involves a smashup, called a “compact binary merger,” that is so violent it produces gravitational waves – ripples in space-time that can be detected by the LIGO and Virgo detectors.

Now that these mergers can be detected, scientists want to further explore them using quick follow-up from telescopes and instruments that spot forms of radiation, such as visible light, radio waves, gamma rays and X-rays. This “multi-messenger” investigation is expected to reveal information that helps physicists piece together new knowledge about the universe.

In this recent paper, the researchers have detected a merger in which one object has a mass that defies the standard description. For decades astronomers have been puzzled by a gap that lies between the mass of neutron stars and black holes: The heaviest known neutron star is no more than 2.5 times the mass of our sun – or 2.5 “solar masses” – and the lightest known black hole is about 5 solar masses.

This newly discovered object lies in this so-called “mass gap.”

In this conversation, Deep Chatterjee, a UWM doctoral researcher and a co-author on the paper, discusses the mass gap and explains the importance of multi-messenger astronomy in determining whether more objects exist in the mass gap.

Scientists don’t know if the object in the cosmic merger that LIGO/Virgo found is a neutron star or a black hole. But, since it falls into the “mass gap,” does that mean there could be neutron stars that are much denser than we thought?

That is certainly a possibility. This observation means that the lighter object – if it’s a neutron star – is the heaviest one detected so far. Theoretically, neutron stars could have masses of about 3. However, scientists have only observed them with masses up to 2.5. So, this would change the present belief of how heavy neutron stars can be.

The other possibility is the existence of a lighter black hole. It is believed that black holes have solar masses of more than 5, the upper limit of the mass gap. This also is challenged in case this object is a black hole.

What will scientists have to see in the future to solve the mystery of whether this object was a neutron star or black hole?

Observations with electromagnetic radiation are a confident way to solve this. If the neutron star was torn apart by the black hole, the dynamics of the remnant matter could produce light, similar to the neutron star merger GW170817 in 2017. Observation of light would mean this was a neutron star. But unfortunately, this particular event was pretty far away, so the light may be too dim.

There is also the possibility that the neutron star was not torn apart but swallowed by the black hole, in which case there is no light. In the future, if we have a better understanding of what a neutron star is made of – its “equation of state” – we could rule out black holes with more confidence.

Why is the mass of these objects important? What have we learned about super-massive objects by studying their movements in space?

The masses are a part of the whole story. Compact objects are interesting because they are probes of both extreme matter and extreme gravity. These conditions cannot be reproduced in an Earth-based lab. Therefore, dense compact objects are high-energy astrophysical laboratories. We need super-dense objects colliding in space to produce enough gravitational waves detectable by LIGO. Thus, binary compact object mergers are the most promising source in this regard.

Also, these compact object mergers produce not only gravitational waves but also other electromagnetic messengers like gamma-ray bursts and fast-optical transients, called kilonovae. Currently, there is a global focus on multi-messenger observations because each method provides different information.

What aspect of this multi-messenger research effort do you work on?

We stand to learn the most from multi-messenger observations, but the duration of these events in the sky is very short. We need rapid communication between LIGO and other partner observing facilities to coordinate.

I’m involved with the LIGO low-latency group, where I develop scientific tools that predict if a merger is worth following up. I also develop automated software infrastructure within LIGO to relay the discovery information to astronomers for follow-up. Besides LIGO, I work with the Zwicky Transient Facility collaboration, an optical telescope in California that follows up gravitational-wave events to hunt the elusive kilonova. With Zwicky, I work on the sensitivity of such telescopes and develop strategies for follow-up. 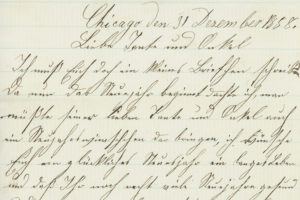 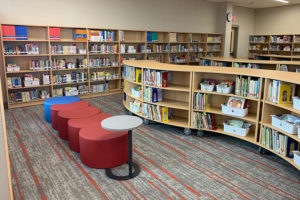