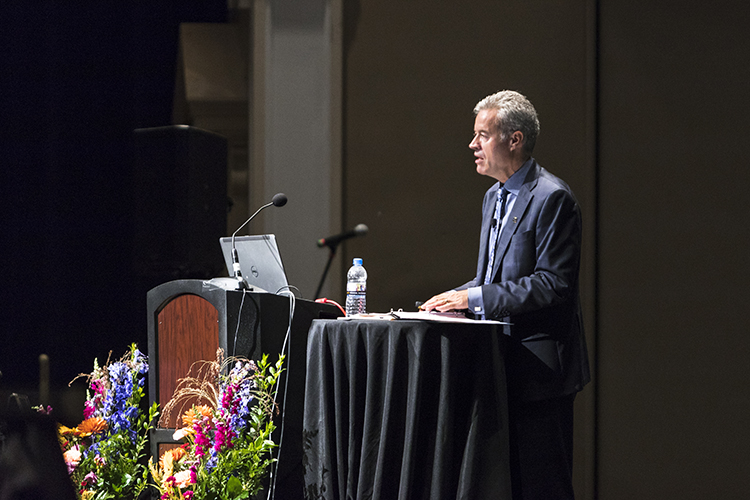 The University of Wisconsin-Milwaukee has a balanced budget for the first time since 2012, Chancellor Mark Mone announced in his fall plenary address Thursday.

In fact, the current budget is shaping up to be the best it’s been in the last decade, Mone added. The university achieved this feat through strategic position control and is transitioning to a new budget model that will incentivize UWM’s strategic initiatives.

It’s welcome news because the population of students finishing high school is not expected to rise until 2035. And students, Mone noted, are UWM’s lifeblood. Thirty percent of the university’s funding now comes from tuition revenue.

The Wisconsin Legislature gets its first look at the 2019-21 biennial budget request in January, and the UW System Board of Regents will be making a pitch for an increase in state support.

Again, compensation will be part of the request.

“We have a 4 percent pay plan underway in the current budget, andwe’re asking for more in the next biennial budget,” Mone said, adding that it’sa top priority.

Adding to the university’s brighter outlook is the $205.3 million raised during the “Made in Milwaukee, Shaping the World” campaign, breaking all previous fundraising records. When it launched in 2014, the goal was $175 million. The campaign has been so successful, it will continue through June 2019.

Another sign of positive momentum, said Mone, is the appearance of UWM in several rankings.

One is the index of the top 500 research institutions in the world by the Academic Ranking of World Universities, also known as the Shanghai Ranking. UWM is back on the list for the first time since 2011.

Improving UWM research and the student experience has required strategic partnerships that are student-centric, future-focused and reach across disciplines, and aim to support the needs of employers.

“What employers say they need are those who think in a different way than someone just training for a specific job,” said Mone.

HERA aims to make it easier for people to access employment by increasing the number of working adults with two- or four-year degrees to 60 percent by 2027.

UWM teamed up with Northwestern Mutual and Marquette University this summer to form the Data Science Institute, which will help brand the area as a tech hub and solve problems through computational research. Data science affects almost every aspect of the tech sector, and the partnership will give UWM students intern opportunities. It also will fund professorships at both UWM and Marquette University.

Funding of the Lubar Entrepreneurship Center represents another model of sustainability for UWM, blending private donations and UW System matching funds to erect the facility at the corner of Kenwood Boulevard and Maryland Avenue. LEC, expected to open in spring 2019, will be a “differentiator for UWM,” said Mone, especially for students interested in owning their own business.

Mone added the real success of UWM lies in its people. More than 70 percent of the campus’ enrollment are continuing students. What influences those students to return and to finish their degrees?

“The answer is you,” he said, “and it’s not just in the classroom. It’s from our advisors to our custodial staff. It’s the commitment that happens every day at UWM.”

He then became emotional in relating the story of Alisha Andrews, a custodian who went the distance for a distraught student who believed her lost wallet may have been thrown out with the trash in Enderis Hall. Undaunted by the rainy day, Andrews dug into a trash dumpster outside and fished out bags until she found the student’s wallet.

Going forward, Mone he is taking steps to improve the campus climate for women and minorities. He is forming a diversity and inclusion council that will advise him on the “right things to be doing” to achieve that and has already established a “male allies” group who will be trained to advocate for female employees.

He and Provost Johannes Britz will be among the first to take the training.