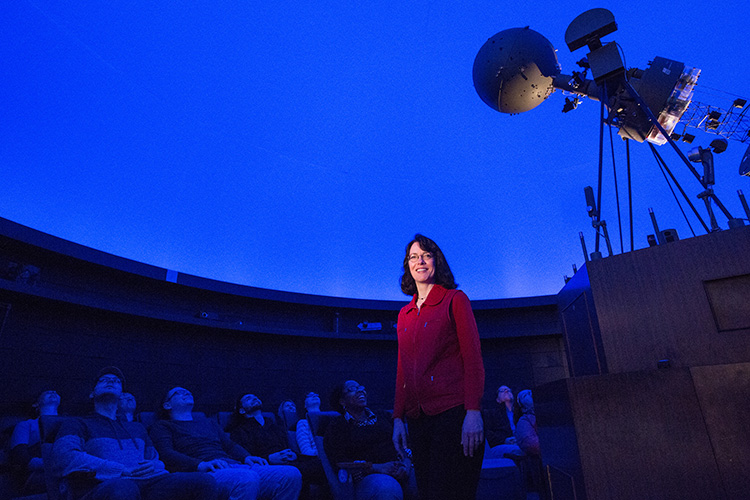 Jean Creighton stands in the Manfred Olson Planetarium, where she has helped thousands of children and adults learn about space. (UWM Photo/Troye Fox)

Jean Creighton has loved astronomy since she began watching the night skies as a child growing up in Greece.

For the past 10 years, she’s been sharing the thrill of learning about stars, planets and other heavenly bodies with thousands of visitors as the director of the University of Wisconsin-Milwaukee’s Manfred Olson Planetarium.

On June 9, the University of Wisconsin System Board of Regents is recognizing her efforts with the 2017 Regents Academic Staff Excellence Award during its meeting in Milwaukee.

“It is very exciting to get recognized at a system level,” Creighton said.

As director of the planetarium for the past 10 years, Creighton has increased attendance to more than 10,000 annually. Last year, 13,000 visitors came to the planetarium’s school and group programs and regular shows including AstroBreaks, Friday Night Shows, Stargazing and other special events, such as watching a solar eclipse (Aug. 21).  She has also developed new programs in collaboration with other departments, and community organizations. Last year alone, she gave 350 presentations.

And, in 2014, Creighton was one of 24 educators chosen to fly on NASA’s largest moving observatory at 45,000 feet, the Stratospheric Observatory for Infrared Astronomy (SOFIA).

She sees her role as an educator and communicator about science and astronomy.

“I’m really excited to share my knowledge with people, but I think a lot about how to deliver the content so it’s understandable and exciting at the same time, without dumbing it down. I think there’s a very fine balance in giving people the elegance of the idea without bogging them down with details.”

“Her efforts have moved the Manfred Olson Planetarium from an underutilized campus resource to a hub of activity that touches people across the campus, the city and the region,” said Patrick Brady, physics professor at UWM.

Beyond introducing thousands of young students to astronomy, Creighton’s work has benefited the department and the university in a number of ways, said Prasenjit Guptasarma, chair of the Physics Department.

“Just to have a planetarium on campus that is run by a PhD astrophysicist makes a difference,” Guptasarma said. “She can answer high-level questions from knowledgeable adults about current exploration and discovery in the field.”

A successful planetarium is a critical component of UWM’s successful research enterprise because the broader impact of research on the community has become increasingly important to funding agencies, he added.

“The most important mission of our planetarium is education and outreach. Jean has put an enormous amount of work and time into making that happen,” Guptasarma said.

A change in career path

Creighton’s original career plan was to become a researcher and professor. A career counselor told her she needed better eyesight to become an astronomer, so she studied physics at the University of Athens, earned a master’s degree from Saint Mary’s University in Halifax, Nova Scotia, and a doctorate in astrophysics from the University of Waterloo in Ontario, Canada. After doing post-doctoral research on star formation at Caltech, she began teaching astronomy at UWM in 1999.

When asked to serve as the planetarium’s interim director, she was initially reluctant, she said.  But when she started interacting with the public and school groups, she found she really enjoyed the work. “I thought this is what I am made to do and this is what I should be doing. So, I was thrilled when the department unanimously selected me.”

She credits a hardworking, talented team of students who provide help with publicity, programs, school groups and events for the planetarium’s continued growth and success. “I couldn’t do what I’m doing without the help of my staff. As a team, we work together and continuously consider how to improve everything we do.”

Creighton has many goals for the planetarium’s future. Her plan is to increase attendance to 20,000 annually by 2022 and increase the number of programs being done in collaboration with campus and community groups.

Right now, for example, she is working with Robin Mello, assistant professor of theater, to develop a play, “The Sun’s Disappearing Act,” around the solar eclipse that emphasizes science, history and culture. That type of collaboration is a unique aspect to being on a university campus. “You have all these experts on all these fields in close proximity,” she said.

A smaller but important initiative is to set up systems so people can order tickets in advance. “Some people drive a good distance to be here, and you can’t do that if you aren’t sure you’re going to get a ticket. That will be a real boost to us,” Creighton said.

Also on the drawing board: improvements to the equipment and location for the Stargazing programs, scholarships for those hardworking student helpers and, maybe eventually, a new building to accommodate more visitors.

Meanwhile, she’ll keep bringing the joys of space to adults and children.

“I just had a school group today and one of the kids at the end raised his hand and said, ‘I don’t have a question. I just want to say this was a really awesome experience.’”

The more urban our lives become and the more light pollution we live with, the fewer people who get to experience a really dark night sky, Creighton said.

“To bring people that opportunity ­­— to get people excited about space — is a big privilege I have.  I can’t imagine a better job.”