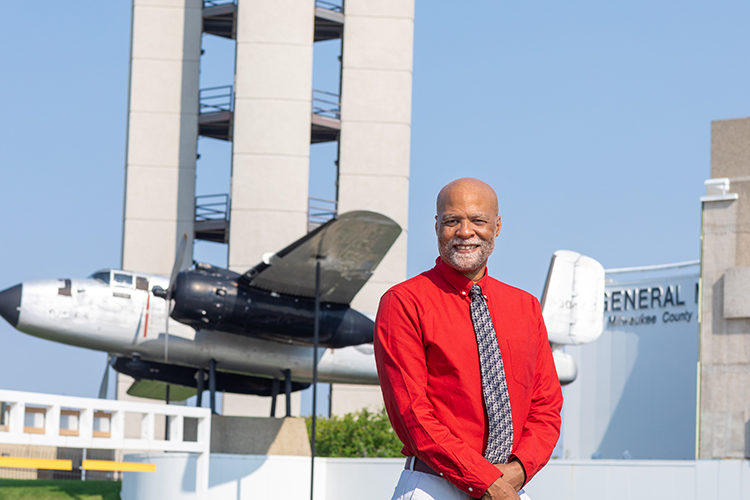 Even after the economy bounces back from the pandemic recession, airlines likely will still face economic pain, says James Peoples, a professor of economics at UWM, as social distancing rules and passengers' fear of infection could hinder airlines from operating efficiently. (UWM Photo/Elora Hennessey)

Air carriers typically have weathered economic downturns in part by making their operations more efficient. This could mean using smaller aircraft that use less fuel, with cabins that are smaller but filled to capacity.

But even the most efficient operations may not help airlines overcome the unprecedented upheaval triggered by the COVID-19 pandemic, James Peoples, a professor of economics found in a study published on the Emerald Open Research website.

“While this industry has weathered previous economic recessions, the economic challenges posed by the COVID-19 pandemic are unique because it creates health risks for passengers,” Peoples and co-authors said in the study.

He compared the efficiency and productivity of airlines in the Asia-Pacific region during the Great Recession to the current predicament caused by COVID-19. Peoples focused on the Asia-Pacific region because it is biggest in the global airline industry, and because the region had experience in responding to a health situation with the SARS outbreak in 2003.

Efficiency increased during the Great Recession in 2007-08, the researchers found, and continued to increase in the two to three years following the recession.

Productivity declined during the Great Recession before rebounding. Airline productivity is measured by the number of passengers transported relative to the number of employees, amount of fuel consumed and number of airplanes in the company’s fleet.

This time, the uncertainty of the pandemic makes it hard to predict the future.

Peoples applied the decline in air travel during the pandemic to his Great Recession analysis to simulate what might happen following COVID-19. He found that there would been declines in both efficiency and productivity both during and after the recession.

This means airlines might lose money no matter how much they tried to streamline operations to become more efficient because there wouldn’t be enough demand to fill seats, either because health and safety restrictions, concerns by would-be travelers or other reasons.

“Findings suggest, regardless of economic conditions, that social distancing which requires airline companies in the Asia-Pacific region to fly with a significant percentage of unfilled seats weakens the performance of those companies,” the study found.

The trends can be applied to airlines operating in the United States that also have taken a significant financial hit, Peoples said. The new COVID-19 relief package signed into law Dec. 27 helps ease the sting.

The package includes $15 billion for airlines to bring back furloughed workers and restore service to cities that lost routes during the pandemic. That provides some relief for airlines.

“Without the stimulus package, I would predict devastation in the airline industry,” Peoples said.

Unclear is how the public will respond to air travel if and when a COVID-19 vaccine is widely distributed. Will travelers still be hesitant to get on planes even with a vaccine? Will business travel remain curtailed as more companies get used to videoconferencing?

The study was conducted with NurulHuda Mohd Satar, a faculty member of economics and administration at the University of Malaya. She earned her doctorate at UWM, where she studied under Peoples.