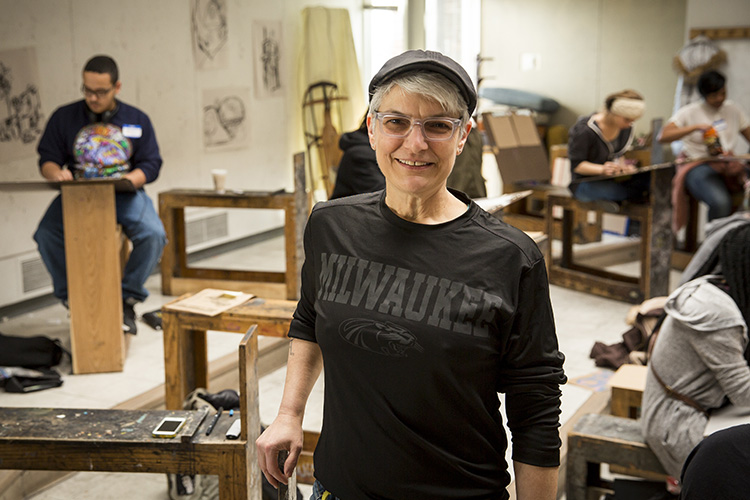 Kim Cosier, at an ArtsECO workshop, is an editor of "Rethinking Sexism, Gender, and Sexuality," a handbook and guide on sensitive issues for classroom teachers. (UWM Photo/Derek Rickert)

They are questions from children that can catch any adult off guard.

“What do you do if your child comes home with schoolbooks with racist or sexist stories?”

Teachers and parents often face such questions or issues. But a new book may help with the answers.

The University of Wisconsin-Milwaukee’s Kim Cosier is an editor of a new handbook, “Rethinking Sexism, Gender, and Sexuality,” that deals with these and other issues. She’s associate dean at the Peck School of the Arts, and the book debuted as a No. 1 pick on Amazon.com.

What inspired you to join the team that wrote and edited this book?

I got really excited about it because of the people that worked on the project. Rethinking Schools [the publisher] is located in Milwaukee, but it’s nationally and internationally known, and it addresses an audience that I don’t usually get to talk to. I really was excited about working on a book that would be more accessible to the average classroom teacher. I think a lot of teachers have questions around issues of identity with respect to gender and sexuality, and they don’t have a place to go necessarily to ask those questions and to find some answers.

What do you hope that teachers learn from this?

I imagine it as being a resource that they’ll have in the classroom as things come up with kids. A lot of teacher education programs don’t necessarily touch on those issues. Some do. Ours at UWM does. [The book] provides them with stories of other teachers who’ve dealt with it in age-appropriate ways.

Did you think that most teachers are willing to deal with these kinds of questions in their classrooms? Do teachers face the danger of political backlash?

We actually started this more than three years ago, and especially the issues around transgender identity have shifted phenomenally in that time. I think people are much more open to talking about trans identities and the sorts of issues around sexuality. At the same time, this country was founded by Puritans and we still have problems talking about sex. But it’s really context-specific. There are many teachers who teach in settings that don’t allow them to freely speak about this.

What can a teacher do?

Again, it’s really context-specific. If you’re teaching in a small, rural school, you have to be careful. We found there were many teachers who don’t feel safe to come out themselves. People can lose their jobs for coming out or talking to young people about their options. You have to know your own specific context in schools, but we give tons of resources for schools and Internet resources.

Can schools change their culture, or is it up to individual teachers?

I think individual teachers can have an impact. Tina Owen used to be a teacher at Washington High School in Milwaukee. Her classroom became this place where the oddball kids and the gay kids and others who feel they don’t fit in or face bullying could feel comfortable. She ended up founding the Alliance High School, which was the first school in the country that was specifically made for students who are bullied or harassed in their schools. She’s actually having an impact on the broader school district in Milwaukee and even beyond.

Do you have any advice for teachers who are dealing with bullying or a child who’s uncertain about identity?

We do deal with that, but we also talk about the current response to bullying. We’re a little critical of, for example, the “It Gets Better” campaign. We should not have to wait for things to get better. We need to make schools safe and supportive of kids now.

Are things getting better?

We’ve learned that progress in terms of acceptance of people’s differences is not a continuous uphill climb. We have peaks and valleys. We have to just stay vigilant and make resources available to teachers.