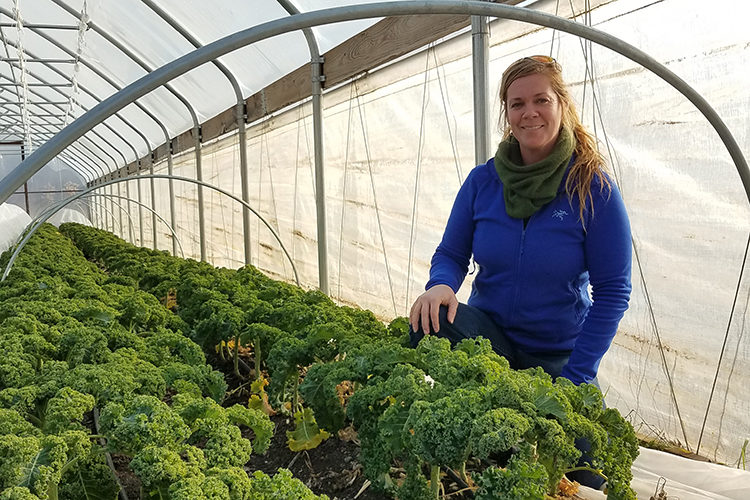 Sarah Wisniewski stands amid rows of kale growing in the hoop house of the Hunger Task Force’s farm in Franklin. (UWM Photo/Sarah Vickery)

Sarah Wisniewski has a lot of mouths to help feed – about 50,000 in any given month.

In her office is a map of all of her fields with notations written in dry-erase marker: This field will grow green beans; this one is for cabbage; zucchinis will be here. It’s the middle of winter, but she’s already planning ahead for spring planting. Southeastern Wisconsin is counting on her to deliver a healthy crop.

Wisniewski is the produce manager of the Hunger Task Force’s farm in Franklin. The Hunger Task Force is a nonprofit that collects and organizes food donations to supply shelters, soup kitchens, senior centers and food pantries with groceries for people experiencing food insecurity. About 10% of the food the group distributes to 183 program sites includes fresh produce from The Farm. That produce is crucial.

“To help with malnutrition and hunger, the most important thing is access to healthy food,” Wisniewski said. Families struggling with food insecurity frequently rely on inexpensive, processed meals like pasta, which have little nutritional value. Fresh fruits and vegetables add vitamins back into their diet.

Though she’s a pro at produce these days, Wisniewski had no background in farming growing up. Instead, she and her family were outdoors-y types, passionate about fishing, hiking and camping. That inspired Wisniewski to pursue a major in conservation and environmental science when she began attending UWM. Initially, she was interested in river restoration.

“But then I started volunteering at a local farm and I was hooked. That was it,” Wisniewski said. She began volunteering with some of her friends at Growing Power, a nonprofit that, at the time, ran an urban farm in Milwaukee. She graduated from UWM in 2010 and rose in the ranks at Growing Power before starting her own mushroom farm, Sugar Bee Farm, in 2013.

But the long hours on the farm began taking a toll, so Wisniewski decided to make a career switch to find more balance. A friend told her about a farming position with the Hunger Task Force. She started as an intern and rose through those ranks too, eventually reaching her current position as a farm manager.

Now, she’s responsible for cultivating 75 acres’ worth of food production each year.

The Farm has numerous fields, 12 acres’ worth of fruit orchards, an enormous greenhouse, hoop houses and even a fish hatchery on site.

Come growing season, she’ll be marshalling an army of about 5,000 volunteers to help her in each area. Like any farm, the work is labor-intensive and extensive.

Last year, for example, Wisniewski and her volunteers planted more than 400,000 seedlings. But just because it’s winter doesn’t mean there’s not food growing. Wisniewski has rows of kale and spinach in a hoop house, and she and the other farm employees just finished washing dozens of winter squashes slated to be brought to food pantries the next day – the quicker, the better. “Food is the most nutrient-rich when it’s within the first 24 hours of harvest,” she explained.

But Wisniewski’s job goes beyond farming: She’s also an educator. Each year, the Hunger Task Force works with Milwaukee Public Schools to teach students about nutrition and healthy eating. They literally get their hands dirty – Wisniewski proudly shows off the raised beds where kids will grow their own crops, and then shows the indoor classroom where they’ll learn to make healthy, affordable meals with the foods they’ve grown.

“One of their favorite recipes is the ‘Green and Gold Mac’n’Cheese.’ It’s mac and cheese with broccoli. They like the kale chips too,” Wisniewski said. “We give them a recipe book every time they come out to The Farm.”

Like any growing operation, The Farm has its difficulties. Bad weather is always stressful, because any crop loss means that the Hunger Task Force has less food to feed families in need. But Wisniewski says that whatever the weather, she comes to work with a smile.

“I feel fortunate to be able to help people doing something that I love.”