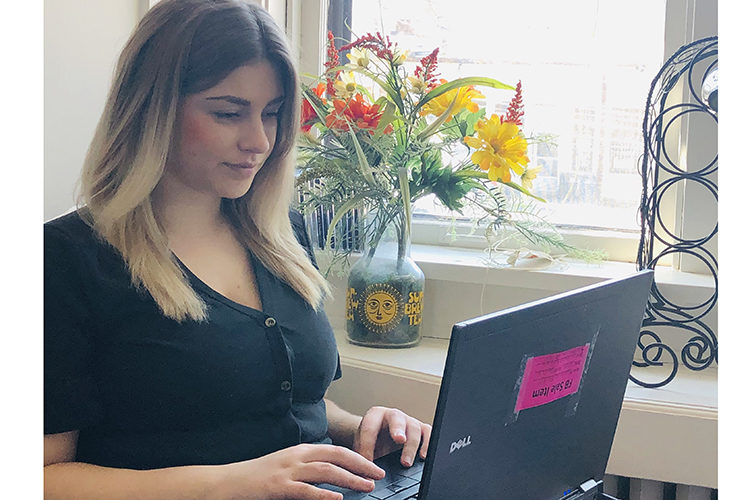 For UWM junior Abigail Childs, obtaining a used computer from UWM Surplus meant she could keep her internship, which required her to work remotely. (Photo courtesy of Abigail Childs)

The coronavirus outbreak triggered a domino effect for Abigail Childs: First, all her courses moved online, then she got laid off from her part-time job, and then she learned that she would have to continue her internship with WTMJ-TV remotely, too.

She wasn’t too worried – until she realized that neither of the two laptop computers she had at home were working.

“It was quite stressful,” said the junior majoring in communications and journalism. “It was either work from home or don’t have an internship. And buying a new computer was not going to be an option.”

That’s when she contacted the Dean of Students office, who helped her find an answer. UWM Surplus, the Office of Sustainability and Campus Technology Support had speedily joined forces to collect more than 100 second-hand computers and laptops and make them available to needy UWM students for less than $50.

While the team had created the program at breakneck speed, selling the inventory unfolded even quicker. “Within an hour we had 50 requests,” said Kate Nelson, chief sustainability officer at UWM. “It was mayhem.”

Nelson began arranging appointments so that students weren’t arriving at UWM Surplus all at once. Over the next day and a half, she said, they sold the entire stock of 107 computers. The Dean of Students office and the UWM Libraries matched an additional 15 students with loans of computers.

In a separate effort in the School of Architecture and Urban Planning, 80 used computers were sold to students without one at home for $100 apiece, said Kurt Meingast, information processing consultant for the school.

School of Architecture and Urban Planning students pay differential tuition, which covers the cost of computer access and their specialized software, but most of those resources are available in the building. Preparing students to work completely from home was a challenge, Meingast said, but the school had mobilized to find and prepare equipment weeks before the governor’s stay-at-home mandate was announced March 24.

The idea of a campuswide sale began even before the COVID-19 crisis occurred, Nelson said. Her department had begun selling surplus furniture and equipment on UWM Surplus’ Facebook page last fall. After the announcement that classes were moving online, several people around campus were imagining similar ideas, including Scott Kleba of Campus Technology Support and Dean of Students Adam Jussel, she said.

“We’re always looking for ways to recycle waste under the purview of working toward a sustainable planet,” Nelson said. “As part of that, Scott Kleba and I were working on managing electronic waste on campus.”

As the coronavirus situation deepened, the Dean of Students office put together a team to be ready to solve the problems we were facing, Nelson said. Offering used computers was one asset they identified.

“Even though there’s a replacement policy that doesn’t mean these computers don’t have any life left in them,” said Avery-Johnson. “I love that this equipment can find new, productive homes, and it’s even better that it can help students achieve their educational goals.”

The team sold as many as they could before the state-ordered social distancing went into effect, said Nelson. That left a list of 200 students on a waiting list, but she believes the program is “on pause,” and will resume sales when personnel are allowed to return to work.

The Dean of Students office is still looking for computer donations so they can get them to students in need. If you are interested in donating, email dos@uwm.edu or contribute to the Forward Scholars Emergency Grant fund.

Downloadable software for students to use on personal devices: https://uwm.edu/technology/free-at-home-access-to-student-software/ 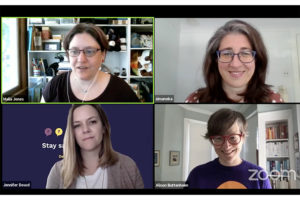