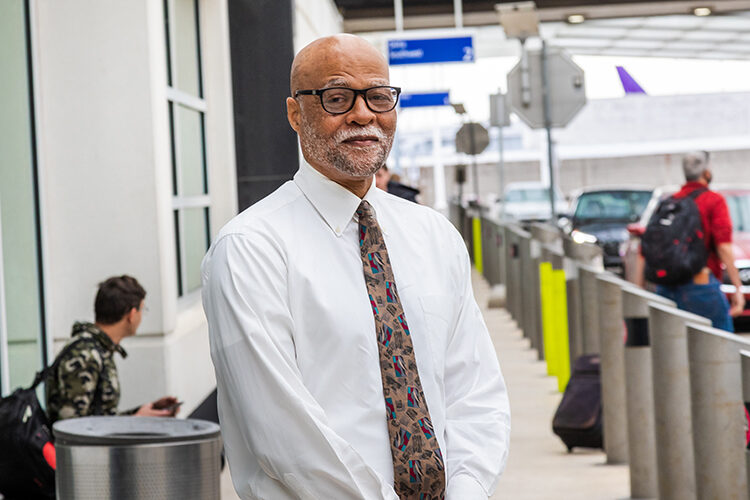 “This problem was there long before COVID, but COVID just made it worse,” said UWM economist James Peoples, referring to a shortage of truck drivers that is projected to hit a record high. (UWM Photo/Elora Hennessey)

Increasing average pay for truck drivers by about 6% might entice them to stay longer in an occupation that historically has had high turnover, while also saving trucking companies money, a study says.

The promise of higher pay, of course, typically helps to keep workers in any occupation from looking around for new jobs. But there is added urgency to bring stability to a trucking industry straining to keep up with an uptick in shipping.

For instance, the Biden administration has announced a plan to recruit and train a new generation of truck drivers to help ease logjams in the supply chain that have been made worse during the pandemic.

“This problem was there long before COVID, but COVID just made it worse,” said James Peoples, a UWM economist.

That wage difference is less than the roughly $3,600 it would cost a trucking company to replace a driver, what the study called a conservative estimate that accounted for expenses including testing fees, referral or sign-on bonuses and recruitment, orientation and training costs.

The impact of driver shortages is felt most on long-haul routes, Peoples said.

“It’s been that way this entire century, and the reason for that is that companies have offered relatively low wages, relative to the work that is required,” he said.

Long-distance truckers can be on the road for long periods of time and away from their family. Some rest stops may not be the most inviting of places to take breaks.

Some may prefer churn

Peoples said one theory is that some trucking companies may prefer more churn because it keeps wages low if they are always hiring new workers.

However, there are signs that driver pay was increasing before the pandemic began.

American Trucking Associations has said that the average pay, including bonuses, of a long-haul driver working a national, irregular route, was $58,000 in 2019, up $6,000 from the trade group’s previous survey in 2017.

The White House said that truck driver wages have increased at least 7% in the last year alone, though employment in some segments of the industry remain below pre-pandemic levels. The Bureau of Labor Statistics has estimated that the number of long-haul truck driving jobs would increase 6% between 2020 and 2030, with much of the projected growth due to the recovery from the COVID-19 recession.

Another American Trucking Associations report in October estimated that the driver shortage was on target to hit a record high of 80,000 drivers in 2021. Among reasons cited were a high number of retirements of older drivers, lifestyle issues and a federally mandated minimum age of 21 to drive commercially across state lines that posed a recruiting challenge.

“COVID presented an environment for some workers to take time away and re-evaluate and say, ‘I really don’t need to work in this environment unless you properly compensate me,’” Peoples said. “This is a labor market where the leverage is with the employee.”

Another solution to ease the driver shortage is to make a male-dominated occupation more attractive to women, Peoples said, which might include creating safer and more welcoming environments for female drivers at truck stops. The trucking association said in October that women make up just 7% of the driver workforce.