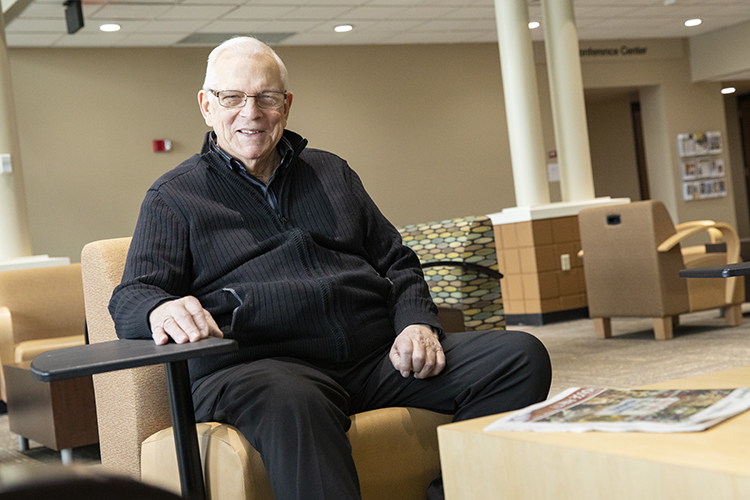 With the encouragement of his daughter, Ben Owen decided to start the associate degree program at the Waukesha campus of UWM two years ago. (UWM Photo/Troye Fox)

Seward (Ben) Owen has already had several fulfilling and successful careers. But, at age 85, he’s planning for the next stage of his life and learning.

Owen is scheduled to graduate from the University of Wisconsin-Milwaukee at Waukesha this spring with an associate degree in general studies.  He finished his coursework in December, but audited two courses during the spring semester.

“My parents were both college graduates, and they sort of bugged me about not getting a degree,” he said. Owen grew up in the Chicago suburb of Maywood and started college classes at Northwestern University, but when two fraternity brothers enlisted in the Navy flight program, he decided to join them. “That stopped my college progress, but I’ve always had the urge to finish.”

After serving as a Marine bomber pilot for four years, he left the service and moved to Miami, where he and his wife raised their four children. He now has 11 grandchildren and great-grandchildren.

In Miami, he worked in the insurance business for 16 years, but his interest in aviation continued. He became involved in competitions and air shows through the local Experimental Aircraft Association chapter.

Back to the Midwest

So, when the opportunity came up to take a job with EAA as executive director of information services, he and his family moved to Oshkosh. “The weather was quite a shock,” he recalled of that move from Florida to Wisconsin. Owen worked at the EAA for 26 years before retiring.

When his wife died 14 years ago and their four children all moved on with their own families and into their own careers, he decided it was time for him to do something about that degree he’d always wanted.

Over the years, he had accumulated 120 college credits as he moved around the country.  So with his daughter’s encouragement, he decided to start the associate degree program at the Waukesha campus two years ago.

“I was living in Oconomowoc with my daughter at the time, so I decided it would be a good place to go. It’s very convenient, and the parking is great,” Owen said.

He’s enjoyed being on campus, he said. “I love going to Waukesha and talking to the kids. There are a variety of students from my age to recent high school graduates. I enjoy learning and keeping my mind active as much as anything.”

“The instructors are friendly and helpful,” he added. He particularly liked a class taught by Drew Blanchard, assistant professor of English, who is friend of his. “It was about poetry, which is sort of unusual for an ex-Marine, but I enjoyed that class.”

He’s got no regrets, except perhaps one: “I wish I’d thought of it sooner. I’m having fun now. It’s enjoyable, and it’s really enlivened my life. My years at UW-Waukesha were immensely valuable to me.”

He’s looking forward to graduation and moving forward with his learning, either formally or informally, Owen said.

He might go for that bachelor’s degree in architecture or English. He enjoyed spending time writing for EAA and his courses in English, but he’s worried that the higher math required of architects might be challenging at his age. Otherwise, he’s studied aircraft design and building, and has a couple of interesting aircraft design projects in mind.

“I’m torn between resuming my aircraft design and building skills or continuing at the university. Perhaps my dream of designing buildings will be hard to realize, but I do feel fulfilled having obtained the associate degree.” 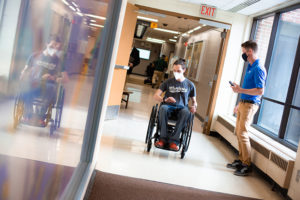