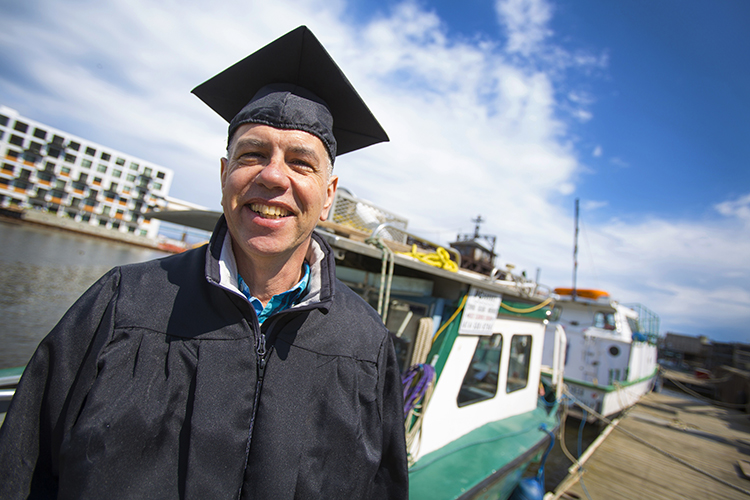 After a lifetime working as a commercial fisherman and shipbuilder, Gonzalo Couto-Lain decided to ditch that dangerous work and go back to school. At age 59, he's graduating with an engineering degree and ready to start a new career. (UWM Photo/Pete Amland)

When he reached his mid-50s, Gonzalo Couto-Lain stood at the proverbial fork in the road. To his left, eventual retirement. To his right, a new career.

With no desire to quit working, but unable to continue the type of work he had pursued since his 20s, Couto-Lain headed right and enrolled as an undergraduate at the University of Wisconsin-Milwaukee.

Now 59 years old, the Uruguay native expects to earn his Bachelor of Science in engineering from UWM in May.

For more than three decades, Couto-Lain earned his living as a shipbuilder and commercial fisherman, working in several countries including Argentina, Brazil, France and the United States.

The physical demands of these jobs have been taxing – commercial fishing is consistently ranked one of the world’s most dangerous jobs and Couto-Lain has suffered a broken leg, a broken hand, six broken ribs and two severed fingers. Surgeons successfully reattached the fingers, and today, his titanium wedding band slips on as easily as it did when he married UWM alumna Susan Lauersdorf in 2002 and moved to the Pigsville neighborhood on Milwaukee’s near west side.

“The work was dangerous – boats were moving, we worked with heavy bags of fish and equipment. But it was fun,” he said.

When his injuries started to deliver their share of daily aches and pains, Couto-Lain took stock of his options. “I didn’t want to sit at home and do nothing. I see people getting old two years after retiring, and I dread that. I enjoy being productive,” he said.

Engineering was a natural choice. “I’ve always worked with machinery and boat building. I figured I could use my previous experience and add to it,” Couto-Lain said.

So at age 54—holding an associate’s degree in humanities from Valencia College, in Florida—he re-entered the classroom.

He credits urban universities in general with their ability to reach older students such as him and to offer them second careers. Couto-Lain picked UWM in particular because his wife had such high praise for it. “She was always talking about UWM, and all her friends were UWM alumni,” he said.

‘We’re never too old to learn’

At UWM, he was able to do research on battery prototypes, working alongside renewable energy expert Deyang Qu, Johnson Controls Endowed Professor in Energy Storage Research.

“The UWM faculty is so proud to serve nontraditional students like Gonzo,” Qu said. “Gonzo reminds us all that we’re never too old to learn. He saw a second chance and realized he could get there with more education.”

Now in his last semester as an undergraduate, he is leading a group of six undergraduates in a senior mechanical engineering design project to convert a small, gas-powered yellow Ligier into a battery-operated vehicle.

The 700-pound French car had been destined for the recycling bin when Couto-Lain rescued it, parked it in the basement of the engineering building on campus, and offered it up as a mechanical engineering design challenge.

“It could be a great engineering promotion mobile,” he says. “High school kids would like driving it around the parking lot.”

Couto-Lain plans on earning his master’s degree in engineering at UWM, chipping away at it on a part-time basis. His career goal is to work as a marine accident investigator, which he says he can pursue once he’s earned his bachelor’s degree. It’s all the fun of the water, he says, without all of the danger.

“People get to a certain age when they want to change careers,” he said.

His message for others is simple: You can do it.

Listen to an interview with Gonzalo Couto-Lain

WUWM-FM’s “Lake Effect” show recently interviewed Gonzalo Couto-Lain about his life’s journey and his plans after graduating with a degree in engineering at UWM. His interview begins about 38 minutes into the show.