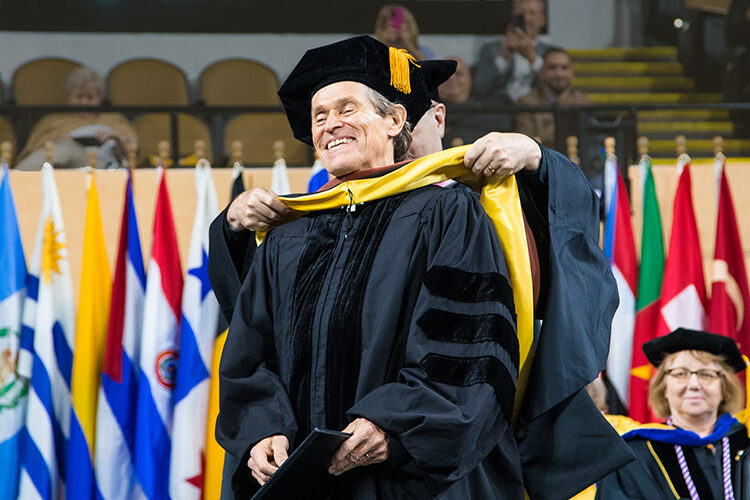 Willem Dafoe smiles as he’s hooded for his honorary doctorate at the May 2022 commencement ceremonies. Dafoe was also the featured speaker at both of the day’s ceremonies. (UWM Photo/Elora Hennessey)

Sitting in his crash pad while attending the University of Wisconsin-Milwaukee, in a room he’d later vacate because the ceiling crashed down on him during a rainstorm, theater student Willem Dafoe wasn’t dreaming of conquering Hollywood or Broadway, or even of making a life out of acting.

He just knew that he liked everything about theater and wanted to do it as long as he could.

Yet here he is, almost five decades later, with four Academy Awards nominations and well over 100 movie credits in a breathtaking variety of roles. Not only a stage and film actor, but one so revered that in 2020, The New York Times named him one of the 25 greatest actors of the 21st century. He’s also one who retains a remarkable humility that’s grounded in his Midwestern roots.

“I went from situation to situation, and after many years of doing it, I have to admit finally I’m an actor,” Dafoe said. “I found making theater stimulating socially at first and later, intellectually – and then later, for lack of better word, spiritually. I felt like this was my calling. My identity as a theater actor started when I was at UWM.”

Dafoe returned to where it all started for UWM’s Spring 2022 graduation festivities. On May 22, he accepted an honorary Doctor of Arts degree and gave speeches at the morning and afternoon commencement ceremonies. He was a picture of genuine and modest joy as the hood was placed upon his shoulders and as UWM Chancellor Mark Mone introduced him as Dr. Willem Dafoe. He advised graduates to be at peace with themselves, find what they loved and practice it however they could. He shook hands with and fist-bumped the grads as they walked across the stage.

The day before, Dafoe met 600 students at the Helene Zelazo Center for a question and answer session about his life and career. They erupted in applause and cheers when he arrived onstage. Many nodded knowingly when he spoke of sleeping on a couch in the theater lounge – affectionately known as “the fishbowl” – rather than at home. And they soaked up the words and wisdom he shared about the craft of theater. 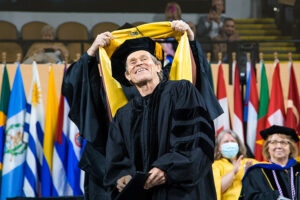 Now 66, Dafoe is still going strong. He appeared in six films released in 2021 – including Academy Awards best picture nominee “Nightmare Alley” and “Spider-Man: No Way Home,” now the sixth-highest grossing film of all time – and has another half-dozen or so on the way. Two of his Oscar nominations came within the last five years – for best actor in “The Florida Project” in 2017 and for best supporting actor in “At Eternity’s Gate” in 2018.

He’s come a long way from growing up in small-town Appleton, Wisconsin, where his mother was a nurse, his father a surgeon, and he was the seventh of their eight children.

Dafoe began acting in community theater when he was young, even garnering a positive review in The Appleton Post-Crescent at age 13. He kept acting in high school and began learning filmmaking (which led to his leaving high school early).

After high school, his friend Jim Gage convinced him to come to Milwaukee and enroll at UWM. Dafoe arrived in January of 1973 and took classes through the fall of 1974. He took as many theater courses as he could and dove into stage productions, including “Phaedra” in Fall 1973 and “A Moon for the Misbegotten” in Spring 1974.

He found himself among a diverse array of students and recalls how committed they were to their studies.

“The students in the Theatre Department were not just 18- to 22-year-olds with their sights on stardom – there was a wide experience and age range in the student population,” Dafoe said. “There were women returning to school after having a family, Vietnam vets returning from service, first-in-the-family-to-go-to-college immigrants – a wide range of personalities and perspectives. This made studies more diverse, and everyone had a different reason for being there.”

Dafoe lived the life of a regular college student while at UWM. He hung out at the Tuxedo bar on Downer Avenue and ate at Numero Uno pizza in Shorewood. He saw movies at the Downer Theatre. He worked jobs at a bindery that printed men’s magazines and as a dishwasher at the Oriental Pharmacy diner. He lived in rented rooms and at friends’ apartments, and survived the ceiling collapse. At an apartment on Farwell Avenue, one of his roommates was a 4-foot-long golden tegu lizard named Angela.

But the love for theater was constant, and he voraciously consumed it. He loaded up on theater courses, sometimes taking more than the standard 18 credits, and those lessons lasted for a career.

“Because so much of the Theatre Department was studio/production-based classes,” Dafoe said, “it taught me how to collaborate with others and made me realize that each project requires a different approach. There is no bible of craft to stick to. The target is always moving, and you have to adapt to each situation.”

By 1974, Dafoe had gotten involved in Theatre X, an experimental theater company that started at UWM and became independent. He left school, and by 1976, he was ready to move to New York. But his time at UWM was invaluable.

“It was an important time,” Dafoe said last year on “Inside the Actors Studio.” “I was young. I wanted to get going. I don’t know, I had ants in my pants.”

In New York, Dafoe continued in experimental theater, initially with the Performance Group and then the Wooster Group – where he created and performed in all the group’s works from 1977-2003. In 1980, he snagged his first film role in “Heaven’s Gate.”

What followed was an acting career marked by daring choices, fearlessness and great success. But returning to UWM for commencement was as notable for him as it was for the graduates he celebrated at UWM Panther Arena.

“I always feel like it’s important to go back and begin all over again,” said Dafoe, who made time among his weekend responsibilities for a mini-reunion with Theatre X colleagues. “Being in contact and dialogue with students and people just beginning their working life is very instructive and inspiring, challenges you and reminds you about where you came from. It also helps you to check in with any level of corruption or complacency that has crept into your work.”

And, yes, he’s aware of the irony of being invited to stand upon the graduation dais.

“I’m flattered that they think I merit the honor,” Dafoe said prior to the weekend. “And of course it’s sweet, because technically I am a high school and college dropout – so to recognize that I was able to take an alternative road to a life of work and study reflects well on the university’s open-minded thinking.”