Think of it as UWM’s version of the TV show “Shark Tank.” More than 200 students have participated in entrepreneurial programs collectively called the UWM Ideas Challenge, and the winners of campus competitions have gone on to attract $160,000 in additional investment from other sources.

Programs such as the La Macchia New Venture Business Plan Competition, Student Startup Challenge and James D. Scheinfeld Entrepreneurial Awards Competition help UWM students and recent alumni hone their ideas so they can get support from programs such as the Ideadvance Seed Fund, established by the UW-Extension and the Wisconsin Economic Development Corporation.

Entrepreneurial activities at UWM are sure to grow with a recent $10 million donation from Milwaukee philanthropists Sheldon and Marianne Lubar to create an entrepreneurship center that will bring together students and faculty members interested in innovation and help them develop the skills to be successful.

As UWM celebrates that gift, here’s a look at 11 businesses already launched by students and alumni.

Tired of repetitive tasks, David Gallegos found a better way to accomplish a chore required in nearly every life sciences lab. After winning the Student Startup Challenge in 2014, the graduate student in Health Sciences began building a device that automates the mixing of liquids needed in biological experiments.

Students enrolled in an engineering course helped him improve the prototype, and in less than a year, he had won additional funding through Ideadvance.

“That award allowed our team to host a booth at the world’s largest immunology conference, where we made many contacts,” Gallegos said.

He’s now drumming up pre-orders and already has contracted to build a device for St. Jude’s Children’s Hospital in Memphis and the University of Massachusetts Medical School.

Julie and Whitney Teska had just finished journalism and history degrees, respectively, and had next to no business training when they became the first winners of the New Venture competition funded through a gift from Milwaukee businessman Bill La Macchia.

Yet the pair, who launched a silk-screen T-shirt printing company, Orchard Street Press, are still in business and thriving. They used their $8,000 winnings from the 2008 New Venture competition to buy equipment and started mostly producing T-shirts for local bands. They now supply a range of silk-screened apparel for bars, restaurants, nonprofit groups and other businesses.

Started in the basement of the Teskas’ home, Orchard Street Press just moved to an 11,000 square-foot St. Francis location and has 10 employees.

As a Panthers swimmer during her undergraduate years, Erika Pliner was frustrated that her coach could not give her feedback on her stroke while she was in the pool. The information could have greatly improved her time.

So when the recent engineering grad had to create a product for a class, she designed a goggles attachment that provides wireless, one-way communication in real time. The attachment uses colored lights with predetermined meanings to convey signals to swimmers.

Pliner and partner Lu Han, who met when Pliner won the Student Startup Challenge, hope to pitch the product this fall to a company specializing in swimwear and technology.

Engineering alumni Kevin Kreger and Gajanan Nagarsekar won the New Venture competition in 2011 and applied their $7,500 winnings to the development of a device that helps users track their heart rate and other health data on their smart phones and transmit that information to a doctor.

“We also prototyped a sports model, and it was used in some marathons on runners who were post-operative cardiac patients,” Kreger.

Their company, Kallows, Inc., moved its operations in 2012 to India, where it recently won the India Innovation Growth Program, supported by Lockheed Martin and the Indian government.

Since then, he has honed the service, called Tali Payments, and recently won a round of seed funding through Ideadvance.

Reeves has used his experience to help multiple student and faculty entrepreneurs at UWM. This summer, he served an internship in the White House Office of Science and Technology Policy.

Adam Wickersham has served as referee for high school and college track meets for more than a decade. Fed up with using expensive, loud firearms to signal the start of events, he developed a device that would save money and his hearing.

Working in his garage, Wickersham, a 2013 graduate of UWM’s Executive MBA program, created a less costly “race torch” that emits a tone and flash of light.

It earned him support from the Student Startup Challenge, which enlisted students enrolled in a product realization course to help hone the torch. Wickersham now has two versions of the torch, both of which will be on the market by November.

Jeremy Tiedt, Justin Bohler and Brandon Tschacher, all UWM alums, modeled their athletic performance product on the National Football League’s Combine – a series of tests given to players before the draft to get a snapshot of the athletes’ range of abilities.

MyCombine provides advanced testing and analytics for athletes of any age or stage of development. Using professional testing equipment and an interactive online database, users can quantify their athletic achievement, compare themselves to other users and measure the effectiveness of their workouts.

The MyCombine team swept all three UWM entrepreneurial competitions in the past year, garnering nearly $20,000 in hard-to-find early seed funding.

Scott Vanderbeck was a graduate student in computer science when he worked with a UWM faculty member and Medical College of Wisconsin doctor to develop software that can detect and diagnose non-alcoholic fatty liver disease, a condition that affects nearly one in three Americans.

The software he created became the first product from the startup company Organic Research Corp., which was a finalist in last year’s Wisconsin Governor’s Business Plan Contest and garnered two grants through Ideadvance.

The potential market for software to diagnose disease is huge, said Vanderbeck, whose company is working with some of the nation’s largest research laboratories as it expands its offerings.

Coordinating care for her grandmother in assisted living caused havoc in Nicole Green’s family. To solve the communication problems, the Peck School of the Arts alum came up with an idea for a mobile app that would give all the relatives the information they needed.

The idea earned her support from the Student Startup Challenge, which helped her create an app called Ginkgo.

Since then, Green and partner Dustin Hahn have formed Red Sky Tek, a small design and tech firm that helps people who want to launch their own startups. The company is earning an income while the pair perfects the Ginkgo prototype and prepares to compete for funding from Ideadvance.

Gabe Wahhab had been a freelance website developer for years before he won $3,000 in the New Venture competition in 2010.

Wahhab, who founded the UWM wrestling club while a computer science student here, used his winnings to launch an online portal for the local martial arts communities called US Combat Sports. The site co-produced with UWM business alum Luke Summerfield was successful, but Wahhab eventually shut it down to focus his website development business called Savvy Panda

Savvy Panda had nine employees, including Summerfield, when Square 2 Marketing, a leading inbound marketing company and Wahhab’s current employer, bought it 10 months ago.

Engineering graduate student Alex Francis was taking a class in entrepreneurship when he learned about a research tool that he believed had commercial potential.

With permission from the inventor, UWM chemist Jorg Woehl, Francis won funding from the Student Startup Challenge to improve Woehl’s prototype of an electrostatic “trap” that isolates a single nanoparticle so it can be analyzed through a microscope.

More backing came from the New Venture competition, Ideadvance and a Catalyst seed grant that Woehl received from the UWM Research Foundation. Francis is now working with researchers at the Medical College of Wisconsin to improve the product. 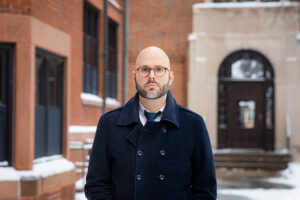 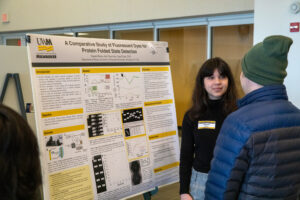