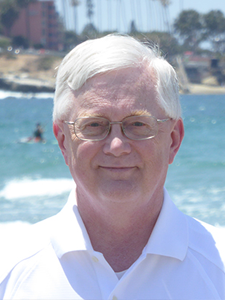 My research involves the relocation of historic earthquakes that have occurred in relatively remote regions where the azimuthal distribution of recording stations is poor, leading to in accurate relative and absolute locations. The most recent work has involved earthquakes along the Blanco Transform Fault separating the Pacific and Juan de Fuca plates off the northwest coast of the United States. Earthquakes in this region have historically been mislocated to the northeast due to the poor azimuth distribution of stations. Events along the transform are typically in the magnitude 5.5 or less range, small enough that only stations in the narrow azimuthal range from about 0 to 135 degrees record them well. This one-sided distribution of stations results in computed locations that are routinely tens of kilometers to the northeast of the actual locations.

Co-PI on a four-year National Science Foundation undergraduate scholarship program, the COMPASS Scholarships, for students majoring in the natural sciences. The program supports a cohort of natural science majors by offering special courses for them, mentorship and tutoring, and financial support.

I am the principal author of two introductory oceanography textbooks. These textbooks have been adopted by colleges and universities across the country as well as overseas.

Over the years I have served on a number of committees, generally related to undergraduate education, for the American Geophysical Union, the American Institute of Physics, and the Geological Society of America.