A few years ago, the BugLady included the Hermit Flower beetle (Osmoderma eremicola) in an episode called “Two Big Beetles” (she has trouble picturing a flower staying upright with this hefty beetle on it). When she was looking at her “X Files” (unidentified bugs) recently, she noticed a certain family resemblance. There are three Osmoderma in the U.S., and it seems that she’s photographed them all, practically in her back yard!

The Osmoderma are hermit flower beetles in the scarab family Scarabaeidae, a family that includes rhinoceros, dung, fig, June beetles, and more. They’re in the subfamily Cetoniinae, a.k.a the Fruit and Flower Chafers, which has more representatives in the Old World than in the New.

Adult Osmoderma beetles (from the Greek osme—smell, and derma—skin) are sap feeders and their larvae are found in the center of dead/dying hardwood trees. These bulky beetles (“tank-like” says one author. “How did a beetle the size of a mouse get into my house? asks another) grow to an inch-plus in length. According to a paper published in 1939, the adults “conceal themselves during the day in the crevices and hollows of trees, where they feed upon the sap that flows from the bark. When captured the beetles emit a very strong but not unpleasant odor which many writers have compared to Russian leather. This odor suggested to French naturalists the name Osmoderma, that is, “scented skin.” For this reason, various sources list “Odor-of-leather beetle” or “Leather beetle” common names.

What Russian leather smells like is a mystery to the BugLady (and, apparently, to other contemporary writers). One source described the male hermit flower beetle as “malodorous when handled;” others say that the beetles smell “peach-like” or “plum-like” (the BugLady will be smelling the plums on her next trip to the grocery store, for sure). The scent is a pheromone that attracts females to the tree hollows where the males hang out and where eggs will be laid. One European study suggests that choice tree-hollow habitats (moldy and slightly moist) are reused by generations of Osmoderma, as evidenced by masses of frass and old beetle bodies.

A number of websites described the care and feeding of your pet Osmoderma (give fruit juice, sugar water, and apple and banana slices to adults, and dog food, decomposing plant material and rotten wood to larvae). They are easy to rear and are recommended for beginners.

But in general, aside from articles describing the larval and pupal stages of the Osmoderma and dissecting and re-dissecting their classification, there’s not much information out there about the genus. Despite the larvae’s habit of burrowing in the heartwood of trees, the forestry sites seem unexcited about them.

There was more information about the original BOTW, the Hermit Flower Beetle (Osmoderma eremicola) then about the other two, but the BugLady suspects that their life cycles are similar. The hermit flower beetle’s eggs are laid and its larvae are found in the decaying heartwood of hardwood trees like apple, cherry, maple, ash, beech and hickory; and within that wood, the large, pale larvae feed. When a hermit flower beetle is ready to pupate, before its second winter, it makes a waterproof “adobe” cell by mixing dirt/wood material with a glutinous substance that some sources delicately call “a secretion” and others call an excretion. After emerging from their pupal cells, the adults disperse from their natal trees, typically traveling, according to a European study, as far as 250 meters. Osmoderma eremicola is a species of special concern in Europe, where its range has shrunk dramatically; forestry management plans have been suggested to preserve the beetles. 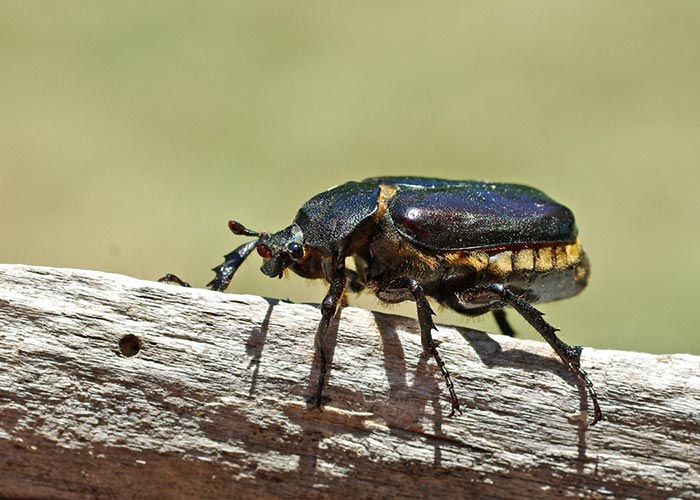 From the Fifth Annual Report of the Entomologist of the State Experiment Station of the University of Minnesota to the Governor for the year 1899 we learn that the species is fairly common and that specimens of this dramatic beetle are frequently sent to entomologist “to name them and describe their habits;” that “They are mahogany brown beetles that hide during the day at the base of trees;” and that “The larvae live in the decaying wood of the apple, as well as that of cherry and other trees; here they consume the wood and induce more rapid decay.”

Osmoderma subplanata is sometimes listed as a subspecies of O. eremicola and sometimes as its own full species. Of the three, its range extends farthest west, from the western Great Lakes through the Dakotas. 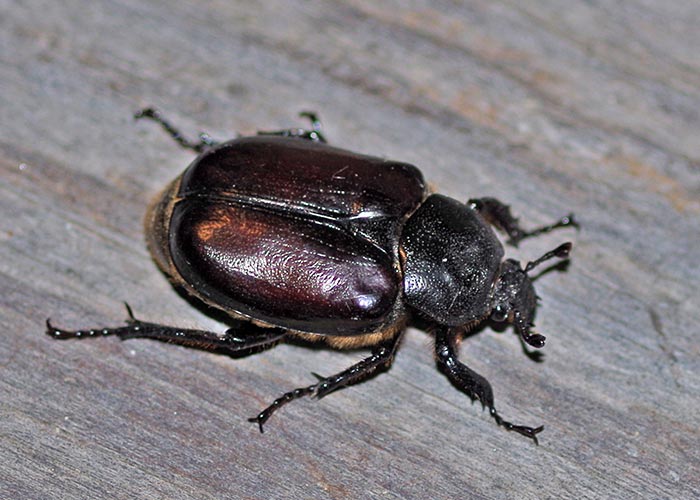 When the BugLady first saw the third beetle, the Rough Osmoderma, Osmoderma scabra, clinging to a cedar by the tips of its tarsi, she thought it was dead. When she passed by its tree an hour later, it had moved on, and she wished she had been there to record it. The identifying characteristics are “elytra (hard wing covers) wrinkled, irregularly punctate” (punctured). This individual is a male—its head looks dented in between the eyes. 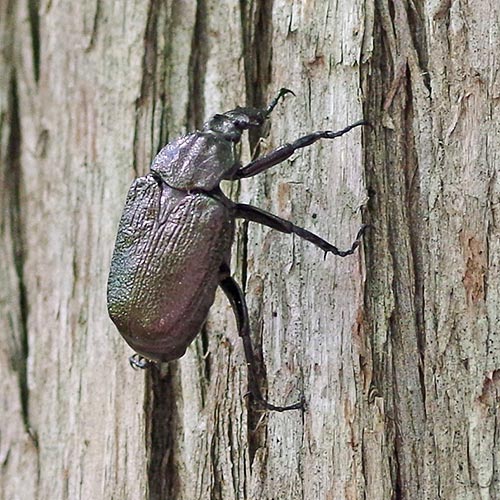 In the Fifth Report of the United States Entomological Commission – Insects Injurious to Forest and Shade Trees, printed in 1890, Alpheus S. Packard tells us that, “Mr. W.L. Devereaux writes me that Osmoderma eremicola and Osmoderma scabra in the larval state channel up the heart of large trees and often enter into close proximity with the live wood. ‘None of our large trees, as a rule, are exempt from their burrows, having them either at the lower part or at the large fork or top. I have seen enormous trees in full leaf and blossom, in a still day, suddenly break off midway of trunk, fall to the earth with a crash, startling and mysterious enough to any hearer in such a day of reigning quiet. Where the fracture most often occurs, no decay of the heart is present, but it is completely filled with the burrow of the Osmoderma.’”