There may be some who would argue that the title of today’s episode should read “Too Big Beetles,” but BugFans will agree that these plus-sized individuals are just right. The two have something else in common—they are “drop-ins” —the White-spotted Sawyer joined a recent field trip, landing temporarily on the jeans of a participant, and the Hermit Flower Beetle was apprehended during its tour of the BugLady’s house (thanks, Seth).

The White-Spotted Sawyer (Monochamus scutellatus) belongs to the beetle family Cerambycidae, the Long-horned beetles, and true to its name, this large beetle (about an inch) had antennae that were dramatically larger. Females of the species have antennae that are slightly longer than their body length, and males’ antennae are often more than twice as long as their bodies. Cerambycids are very spiffy beetles, and many beetle fans fall in love totally (but unrequitedly) with them. 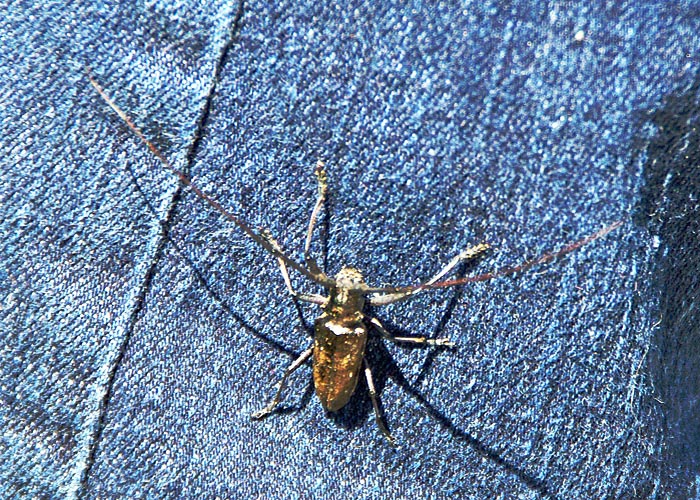 As a group, beetles called “Sawyers” are not favorites of the lumber industry because their wood-boring habits decrease usable wood, stain it, and open the door for decomposers—with a little defoliation thrown in for good measure. Adults don’t bore—nothing sporting antennae like that is found inside a tunnel—but the larvae sure do. WSSs are found in conifer woods, where adults eat needles and the tender bark of twigs (sometimes girdling and killing them), and their young burrow into the cambium, leaving piles of sawdust to mark their passing.

WSSs are found from coast to coast across the northern half of North America. Here in the cold of God’s Country, it may take a larva two years to reach adulthood. The eggs are laid in slits that Mom chews in the bark of trees that are weakened or that have been recently logged. She may create four egg sites for every one she uses. Larvae hatch and feed, burrowing deeper as they get bigger; and if two larvae run into each other in a heavily-infested tree, one will cannibalize the other. They overwinter within the wood, resume feeding in spring, and later return to the bark layer to pupate, plugging their entrance hole with sawdust first. In the northland, they spend their second winter as a pupa, emerging by early summer; farther south, they spend their first winter as a pupa. Their location, up to 6 inches into a trunk, makes them hard for woodpeckers and parasitic wasps and flies to find.

“White-spotted?” They’re named for their white scutellum, the small triangle just behind the thorax, where the elytra (wing covers) come together. They may also have random light spots on the elytra. The BugLady was startled to discover that their other common names are Oil Sands Beetle and Tar Sands Beetle; she watched, this spring, a profoundly disturbing video about the impact of Tar Sands extraction in the wilds of Canada.

The very photogenic Hermit Flower Beetle (Osmoderma eremicola) is also called the Odor-of-Leather beetle (Eaton and Kaufman, in Field Guide to Insects of North America, say that when handled, these guys/gals “reportedly emit the odor of Russian leather, whatever that is”). Considering her usual search results, the BugLady is afraid to Google “Russian leather.” One source described the HFB as “malodorous.” 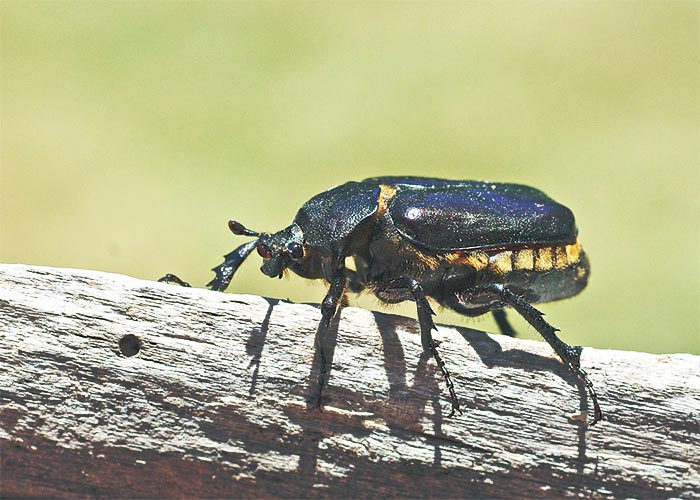 When not in the BugLady’s house, HFBs are found around the edges of woodlands. Like the WSS, the HFB’s larvae are found in the wood of dead trees—the eggs are laid in damp, rotting wood and within that wood the large, whitish larvae feed for three years. Where the WSS prefers conifers, the HFB goes for hardwoods like apple, cherry, maple, ash, beech and hickory. Its range is similar to that of the WSS, and its size is even larger—at about 1 ¼, it’s a small tank of an insect. HFBs are members of the Scarab beetle family Scarabaeidae.

From the Fifth Annual Report of the Entomologist of the State Experiment Station of the University of Minnesota to the Governor for the year 1899 we learn that the species is fairly common and that specimens of this dramatic beetle are frequently sent to entomologist “to name them and describe their habits.” They are mahogany brown beetles that “hide during the day at the base of trees” (which is precisely where this individual headed after it sat for enough pictures). With regard to its diet, the entomologist reports that “The insects feed upon the sap of injured trees, but have also been seen enjoying a ripe apple. The larvae live in the decaying wood of the apple, as well as that of cherry and other trees; here they consume the wood and induce more rapid decay.”

A number of websites described the care and feeding of your pet HFB (give fruit juice, sugar water, and apple and banana slices to adults, and dog food, decaying plant material and rotten wood to larvae). They are easy to rear and are recommended for beginners.

When a HFB is ready to pupate, before its second winter, it makes a waterproof “adobe” cell by mixing dirt/wood material with a glutinous substance that sources vaguely call “a secretion.” The pupal cell hardens with the larva inside, and if the cell is damaged, the larva will perish.

HFBs have been subjects of a number of scientific studies. In one, adults were examined to see if they carried a particular variety of hitchhiker, a phoretic mite (80% did). Phoretic species attach to other species purely as a way to get around – veteran BugFans will recall the helpful phoretic mites on Burying beetles; the mites climbed on board as the newly-minted adults exited their underground pupal chambers.

Another study measured how cold the larvae could get without freezing in their woody shelters (-8.3 degrees C for 96 hours, partially frozen but protected by glycogens (antifreeze)). A third intriguing report mentioned recording HFB habitat data by looking at the contents of tree-hole nests of Barred Owls.

On a totally different note. The BugLady has been musing in these pages about the circadian rhythms of the Northern Pearly-eye. Last night, when she took the dog out for his final trip, she saw a butterfly-like insect walking around on the driveway under the yard light. It was a Northern Pearly-eye. At 1:00 AM. Wowsers!! 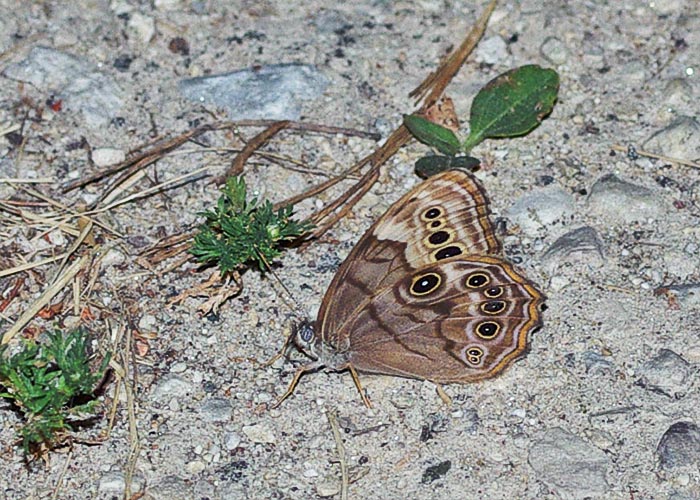