People often ask the BugLady what her favorite bug is, and although there’s a crowded field for second place, the Tiger Swallowtail is the hands-down winner. Most Impressive Bug? The Black horse fly (Tabanus atratus) (family Tabanidae) is certainly high on that list, and although she knows that it’s (probably) not going to pursue her (they generally stalk non-human mammals), just seeing one always gives her a bit of a start. We have visited the Black horse fly in the past, but briefly, and it’s time to fill in some gaps in its biography. This fly is not the tiny, humpbacked Black fly that lives near rivers and torments all comers. 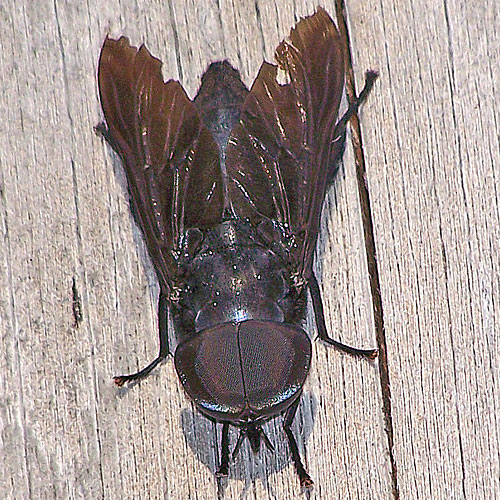 Yes, there are larger flies in the neighborhood – some of the robber flies, for example, are bigger – but they lack the substance of this fly. The official measurement of 20 to 28 mm (an inch-ish) just doesn’t do it justice. As one bugguide.net correspondent put it: “This is the largest fly I have ever seen, I actually saw two of these at two different locations on the same day. I am guessing it is a horsefly of some sort. A handful of these things ought to be able to carry a horse as a ‘to-go’ meal!”

The Black horse fly is mostly found east of the Rockies. Its larvae live in wet/damp places at the edges of wetlands, and the adults are generally found within a mile or so of the ponds they grew up in.

“Atratus” means “clothed in black,” and one of the common names for this fly is the Mourning fly. Adults are variously dark gray/black/brownish-purple, with equally dark wings , and it’s been suggested that they’re the infamous “blue-tailed fly” from the folk song “Jimmy Crack Corn”. Check this link. They can be a challenge to photograph because their velvety, black color sucks up the light. Males have wrap-around (holoptic) eyes that touch at the top of the head , and females’ eyes are separated (dichoptic).

Their larvae are pale with dark bands and may be twice as long as their elders when mature. They have pointy mouthparts that can pack quite a punch if you mishandle one.

Black horse flies lay their eggs in mounds on sedges and other vegetation above water or wet ground, and they may deposit three or four such masses. The newly-hatched larvae drop down and dig into the detritus or mud.

According to Werner Marchand in the Monographs of the Rockefeller Institute for Medical Research (1920), “Walsh found his aquatic larvae, on many occasions, ‘amongst floating ‘rejectamenta.’ On one occasion, he found six or seven specimens in the interior of a floating log so soft and rotten that it could be cut like cheese.” He goes on to say that “when handled, the larva is, according to Walsh, ‘very vigorous and restless,’ and burrows with great strength between the fingers, and even on a smooth table, walks as fast as any ordinary caterpillar, backwards or forward; when placed in a vessel of water it swims vigorously, twice the length of its body at every stroke…”

According to Marchand, the larvae can produce sound “…the crackling noise was freely produced by full-grown Tabanus atrata larvae, and … was chiefly heard when the larvae were disturbed and defending themselves with their sharp mandibles. The coincidence of the two phenomena was so close that I am bound to assume that the sound was produced by means of the mandibles.”

They climb up onto drier ground to pupate in the soil. Marchand says that “the pupa state lasts but a few days, and before the emergence of the fly the pupa is pushed to the surface of the ground by means of the bristles and thorns of the abdomen, with bending movements of the body.” For more about what happens in a pupal case, see this page.

Much of what is written about Black horse flies concerns their food and feeding habits. The larvae are active predators. Marchand again: “On September 2, 1863, he found a nearly full-grown larva among floating rejectamenta, and between that date and September 23, this larva devoured ‘the mollusks of eleven univalves’ (genus Planorbus) from one-half to three-fourths of an inch in diameter; and on three separate occasions observed it work its way into the mouth of the shell.” They eat other aquatic invertebrates, too, and small vertebrates, and even their tabanid brethren. Jones and Anthony, in The Tabanidae (Diptera) of Florida write “medium to large-size larvae of Tabanus atrata are extremely aggressive. When two or more are placed in the same container, only a short time usually elapses before all are dead except one. The survivor will feed on the victim if hungry, but generally it appears that a larva kills to avoid being killed.” 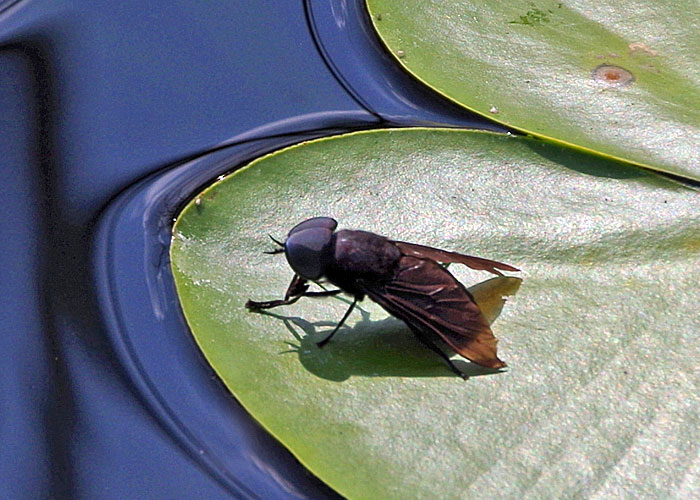 Like mosquitoes, female tabanids need a blood meal in order to maximize reproduction. Both males and females feed on nectar from flowers (he lacks her piercing mouthparts), but when she is in reproductive mode, a female will stalk livestock and other large mammals by their movement and their CO2 trail. She punctures her victim’s skin with a pretty sophisticated set of blades and is classed as a sanguivore – more specifically, she is a telmophage, because she laps up the resulting pool of blood instead of sucking it (unlike mosquitoes, who are “vessel feeders” or solenophages that employ a “syringe and pump”).

Humans are generally not targets, but a bite is, apparently, unforgettable. When present in numbers, these flies can be a problem for livestock due to blood loss, distress, and potential disease transmission.

Several resources pointed out something that the BugLady had never really thought about before – that being a sanguivore, getting a meal by puncturing an animal that is larger and that takes exception to being punctured, is a dangerous way to make a living. The blood is, as one researcher points out, “not freely given,” and a potential victim may simply swat its tormentor away or may eat it. The BugLady once went on a canoe trip on the Oconto River in Wisconsin where she was accompanied by clouds of deer flies and learned to swat them without breaking stroke, and after nine hours on the water, there was a layer of dead deer flies over the bottom of the canoe (the 50 yards of whitewater just before the pull-out spot were pretty memorable, too).

Another down-side of blood-feeding is that depending on the body temperature of the “pierc-ee,” the piercer is courting temperature shock by ingesting a substance that is much warmer than it is.

The “take-home” is that sanguivores need to do their work in a hurry (solenophages tend to get in and out more quickly and quietly than telmophages), and that the nutrition received needs to be worth the energy – and risk – required to extract it.