“To sleep, perchance to dream” may be a classic line from a deep thinker, but, the BugLady is here to assure you, what happens when insects “sleep” makes the Prince of Denmark look like a piker.

You looked at the pictures and thought—aha! Coprolites! Interesting guess, tells me where your head is at, but no, these are pupae, and continuing our R-rated review of the insect world, these are “naked” pupae (because the case is not “dressed” in a spun cocoon).

In insects that have complete metamorphosis—egg to larva to pupa to adult—the pupal stage is the resting/changing stage where the ugly duckling turns into the beautiful swan. Think of it—the critter enters its pupa looking, well, worm-like, and exits 2 days to 10 months later (or more—consider the Buck Moth), looking vastly different. So different that it’s not uncommon in insects with complete metamorphosis for the adult to have entirely different mouthparts and a different diet than it did as a larva, and even to live in a different habitat. The secret? Histoblasts (pronounced “histoblasts”). 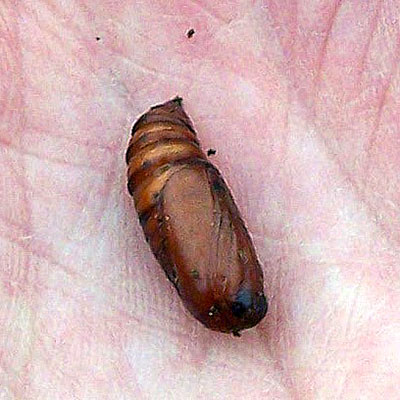 After the larva calls it a night and tucks itself into its mummy-like cocoon/chrysalis/pupal case, its previous body essentially turns to mush. The transformation is called (what else?) histolysis (from the Greek histos meaning web, loom, warp or tissue, plus lysis, Greek for loosening or dissolution), and its completeness/mushiness depends on the order the insect belongs to—beetle, fly, butterfly, etc. But then…. But Then! Leucocytes in the blood feed on the liquefying tissues and return to the blood the building blocks needed to construct the adult. Special cells (you guessed it—histoblasts) that were present as “buds” in the larva start re-organizing that liquefied tissue, grabbing what they need to form the new organs that will operate the new body. Wowsers! You can see buds of adult structures like eyes and mouthparts and wings in bas relief on the outside of the pupal case.

The 2+ inch long xpupa was lying on the surface of the ground among the leaves. Some sphinx moths pupate in underground chambers, but some make their pupal cases on the ground, thinly covered by leaves. 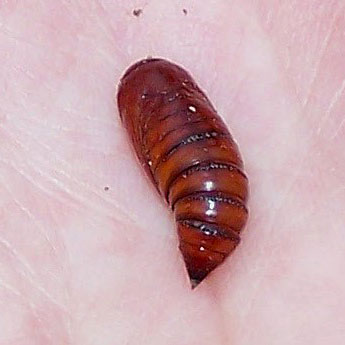 The BugLady found the 1+ inch long ypupa, a few inches underground while she was planting a Prairie Dock. As she was photographing it, ypupa was wriggling and turning over in her hand like a Mexican jumping bean (apparently, some sleep is deeper than others). But, the ability to make its rigid (chitonous) pupal case turn and twist allows an underground pupa to move to the surface when it’s time for the adult to emerge. The stiff fringe on the trailing edge of the segments of the beetle pupa prevent backsliding on the trip up through the soil (pupal activity shouldn’t come as a surprise—remember the extremely active mosquito pupa, a.k.a. tumbler.”).