The BugLady has expressed her affection for stink bugs before (check out the story about how some stink bugs can escape from a spider web). To her delight, they were everywhere this summer.

Stink bugs (family Pentatomidae), from penta (five) and tomos (section), a reference to the number of segments in their antennae) are a mixed group. As true bugs, they have piercing-sucking mouthparts in the form of a tube that is inserted into their food source, through which digestive juices are injected, and through which the resultant pre-digested tissue is extracted. The family contains herbivores, including a number of agricultural pests; carnivores, some of which are used as biological controls on other insects; and a few that start their lives as plant feeders but switch to animals early on. A comment in bugguide.net suggests that the carnivorous stinkbugs have broader “beaks” than the herbivores do; the thin beak of a green stink bug can be seen in an attached picture, and the mouthparts of a Podisus can be seen among a nice family album of pictures at the Great Backyard Arthropod Project. There are about 250 species in North America and 5,000 worldwide. 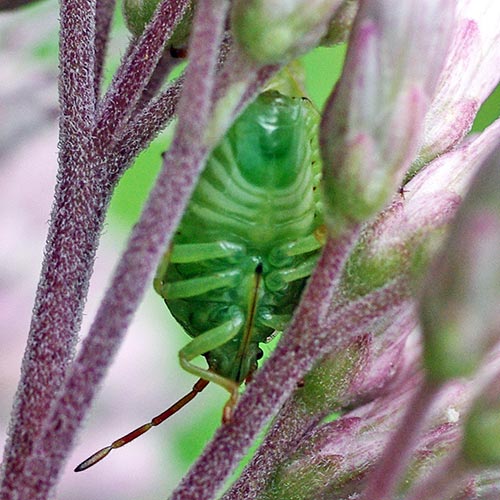 Stink bugs? Because when they are fussed, they release what Kaufman and Eaton, in the Field Guide to Insects of North America call “aromatic compounds sure to repel all but the most desperate predators.” Researchers Krall, Bartelt, Lewis, and Whitman published a study on the twice-stabbed stink bug, featured below, explaining how this smelly defense works for TSSBs (a story that is undoubtedly similar for other stink bugs). Adult TSSBs have two glands on the top of their thorax through which they can emit a liquid which is a combination of 11 volatile compounds; the nymphs have three pairs of similar glands on their abdomen. The liquid is released as droplets, not as a spray. Some of the elements in this cocktail are poisonous; others are irritating, and still others are repellant. The liquid emerges onto roughened areas of the cuticle where it sits as a droplet but does not spread, and it can be reabsorbed after a few seconds. The exception comes when the substance is released on the bug’s leg, and then it spreads out and covers the leg’s smooth surface.

It took some poking and prodding by the scientists to make a bug initiate a release of chemicals—producing the stuff is, after all, an energy expensive exercise, so using it must be worth the insect’s while—but as the bugs got more agitated, it was easier to get them to react. Turns out that the muscles that control these emissions are pretty sophisticated, and the release can be targeted—poking the right side of the bug caused release of secretions on its right side, but brushing the head brought a two-sided reaction. Gentle stimuli provoked small droplets, and rough handling produced more. 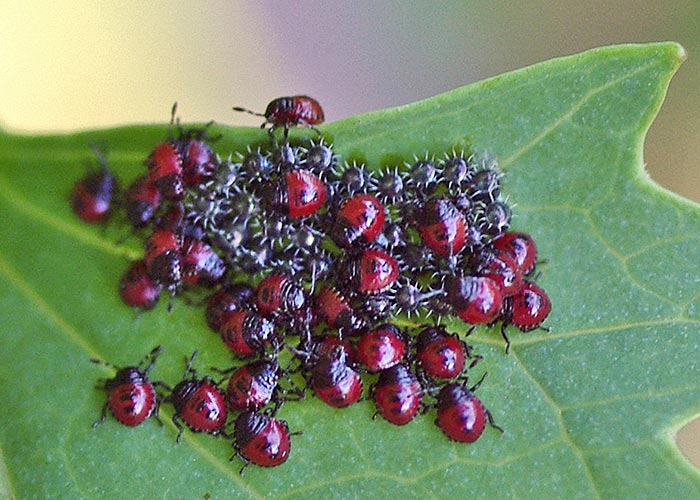 Some predators are pretty much flummoxed by all this. Starlings sampled one bug and spit it out immediately, apparently put off by the instant “flavor burst.” The clever bug can time the chemical surprise to coincide with the moment it lands in a predator’s mouth (a time of higher danger rather than mild danger), which often results in its release, alive. Killdeers ate one, but then refused seconds. Anole lizards ate them a few times but then rejected them, implying the build-up of a toxin. American Robins were pragmatists; despite the unpleasant experience, they continued to eat TSSBs if nothing else was offered. Predators displayed aversion behaviors when the next TSSBs were served up.

The authors considered the idea that the chemicals acted as aggregation pheromones, since males and females produce similar chemicals and TSSBs are often seen in groups (often flagrante delicto) or possibly as alarm pheromones (since the odor of the researchers’ stinky fingers caused TSSB stampedes on flowers. The bug’s aposematic (warning) coloration tells us that something is going on.

Anyway, one sunny morning at the end of May, as she was hanging wash on the line, the BugLady spied these stink bugs in the tall grass nearby (imagine—after almost 40 years at this place, she is still finding new bugs!). They turned out to be Twice-stabbed/Two-spotted Stink Bugs, named for the two red spots on their scutellum, the triangular patch on the thorax between the wings, and also known regionally as Wee Harlequin bugs. They were formerly, and more intuitively, known as Cosmopepla bimaculata but were renamed Cosmopepla lintneriana in 1909 to honor Joseph Lintner, an agricultural entomologist who held the position of New York State Entomologist from 1881 to 1898. There’s another stinkbug, Perillus bioculatus, that shares the common name Two-spotted stink bug, and there’s a Twice-stabbed lady beetle, too. 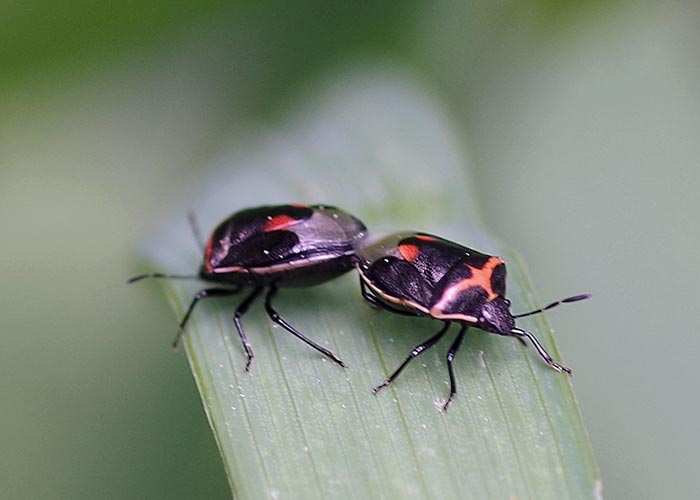 TSSBs can be found across much of North America and south into Mexico; they feed on a bunch of different plants including the seeds of mints (especially hedge nettle, Stachys palustris), some composites, asparagus, and oats. They’re about a quarter of an inch long. They’re pretty hardy, overwintering as adults (sometimes as late-stage nymphs), and hiking around soon after the snow melts in spring.

Eggs are laid on the undersides of leaves, about 12 hours after copulation (they remain joined for about 24 hours). Sometimes a female will retain fertilized eggs in her body for another 24 hours or longer, and these eggs inevitably hatch more quickly. Nymphs release themselves from their eggs using a tough, triangular “egg buster” on their heads. For a shot of a nymph and a close up of an adult, see http://bugguide.net/node/view/359885/bgimage and http://bugguide.net/node/view/1163942/bgimage.

The second stinkbug du jour is Podisus placidus (probably). Members of the genus Podisus are sometimes called the Spined soldier bugs (there’s a spine on each side of an adult’s thorax), and they are found in forests and fields across the northern two-thirds of the U.S. and into Canada. The adults are medium-brown, pitted and speckled, and are in the three-eighths-of-an-inch range. 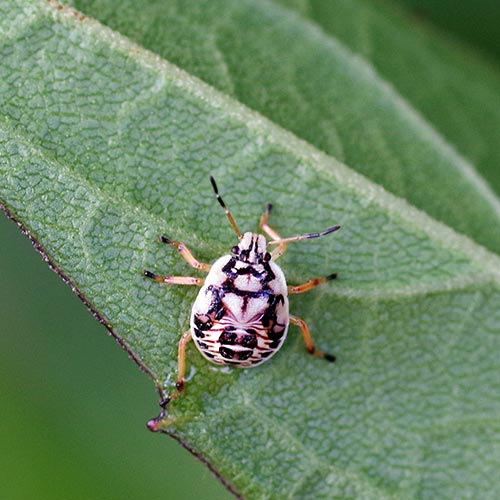 These are meat-eaters. Some Podisus species are marketed and exported for pest control, and cannibalism is not unknown among the nymphs.

Other members of the genus feed on cabbage worms, corn borers, corn earworms, gypsy moth caterpillars, webworms, and Colorado potato beetles, among other notorious species. The saliva of one species was studied and found to have contain chemicals that both paralyzed and killed its prey. Podisus placidus searches for sawfly larvae and Lepidoptera caterpillars, especially Eastern tent caterpillars (and will enter their tents to nab them), and forest tent caterpillars (which, despite their name, don’t spin tents). For a shot of a Podisus nymph that is truly out on a limb.