The BugLady has always had a soft spot in her heart for stink bugs. She likes the name “stink bug” and the chemical warfare that earned that name; they come in a rainbow of colors and even the nymphs are pretty.

Why “stink bug?” When they are fussed, SBs release what Kaufman and Eaton, in the Field Guide to Insects of North America, call “aromatic compounds sure to repel all but the most desperate predators.” They are not the only odor-producing insects. SB nymphs manufacture chemicals in internal glands are on the top side of their abdomen (a location that will be covered by wings when they are adults), adults in one gland on the thorax. The chemical is released through slits in the exoskeleton; the adults’ gland has two openings, and they can spray left or right or both. Odor isn’t a foolproof deterrent; most birds have no sense of smell and happily chow down on them, one parasitic wasp finds SBs by their defensive scent, and some feather-legged flies (whose maggots are parasitoids) are attracted to the SBs’ pheromones.

Stink bugs are in the family Pentatomidae, and their family tree includes some voracious, crop-damaging plant feeders (many stink bugs are somewhat resistant to pesticides) as well as some species that eat their brethren. SBs use their piercing-sucking mouthparts to inject a “saliva” that pre-digests their food, and the mouthparts are tucked “under their chin” when not in use. It’s not a huge family—maybe 250 species in North America and 5,000 worldwide. Their shield-shaped bodies average a chunky half-inch and their five-segmented antennae explain the family name—Penta (five) and tomos (section).

Here are a few great SB stories from For Love of Insects, by the renowned entomologist Thomas Eisner. First, he describes the stink bug’s stink as “persistent.” When an SB discharges its scent gland, some of the liquid is trapped on a rough surface near the slit that acts like a sponge, retaining some of the chemical for a lingering effect.

The second story has to do with SBs and spiders. An SB caught in a web is generally a goner. Spiders quite efficiently bite and wrap their prey, and many can thus immobilize SBs without allowing the SB to spray. By the time the spider delivers the coup de grace, any resulting spray is trapped in the web envelope and generally diffused into the air. Occasionally though, Eisner saw a spider get hit full force by the chemical, early in its “processing” of the SB. In those cases, the spider’s reaction was dramatic—it fled the scene, regurgitated, and used its legs to clean itself, which included drawing appendages through its mouth as if wiping the chemical off.

Meanwhile, the SB took advantage of the distraction and escaped, but Eisner was amazed by its method. An SB’s piercing-sucking mouthparts are not designed for chewing through spider web; instead, it applied its corrosive saliva to the web where the web touched its legs or body and used its legs to spread the saliva around. The saliva both diluted the glue on the strands of web and made them less elastic. The imprisoning strands broke, the SB slid down and got trapped on a new, sticky section of web, and repeated the process, over and over, until it got to the bottom edge of the web. The amount of saliva needed was far beyond what any SB carries around with it, so they must be able to produce it easily. Wowsers!!

Here in the (snooty) Western World, we turn up our noses at entomophagy (the science of eating insects) but SBs have found their way into the cuisines of Mexico and of several southeast Asian cultures (where their strong “spicy” odor is appreciated).

Maternal care has been recorded for some species of stink bugs. After she lays her cluster of keg-shaped eggs, some females stay and guard them. According to Waldbauer in The Handy Bug Answer Book, when an experimenter removed the guarding female from some clutches of eggs but not from others, none of the unguarded eggs survived and only half of the guarded eggs survived. The guarded eggs were parasitized by wasps that eluded the watchful female, who always faces forward when guarding, by sneaking in behind her.

Here’s a sampling of Wisconsin SBs, all of which are pretty common nation-wide.

Green stink bugs (Chinavia or Acrosternum hilaris) (probably) suck juices from a variety of agricultural crops like tomatoes, peas, corn and soybeans and from fruit trees and their seeds. 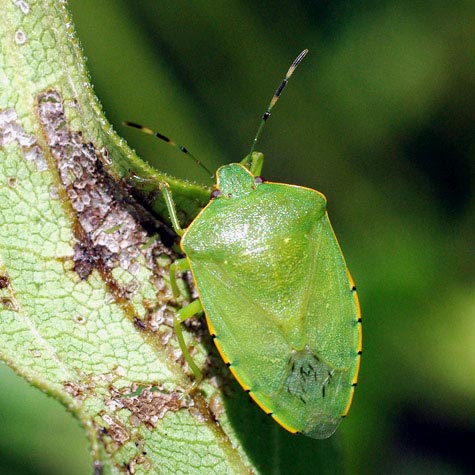 Brown stink bugs (Euschistus sp.) hang out in open spaces like grasslands and gardens, where they eat grasses and grains, flowers and fruits. And corn and soybeans. Their piercing-injecting-sucking causes mechanical damage (holes) and chemical injury that kills or stunts plants or inflicts cosmetic damage on fruits. Some SBs have earned the nickname “catfacing insect” because of the cat-faced scars that are left by their browsings. 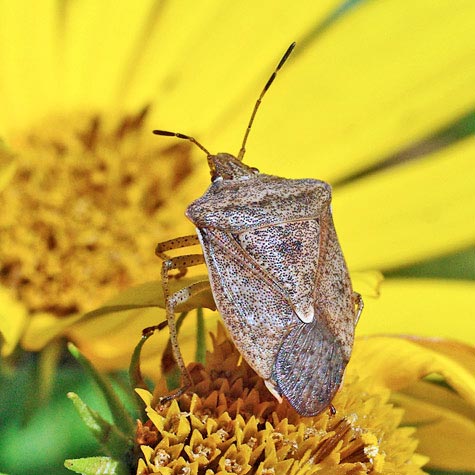 The red and green or red-backed stink bug (Banasa dimiata)(a.k.a. dimidiate) feeds on the juices of a variety of trees and shrubs. The Bug Lady once saw a picture of a group of stink bug nymphs clustered around their recently-vacated eggs. The caption explained that they were eating their eggs, and that as they did so they were ingesting bacteria left behind from their mother’s gut that would set up shop in their guts and allow them to digest the cellulose materials they ate! 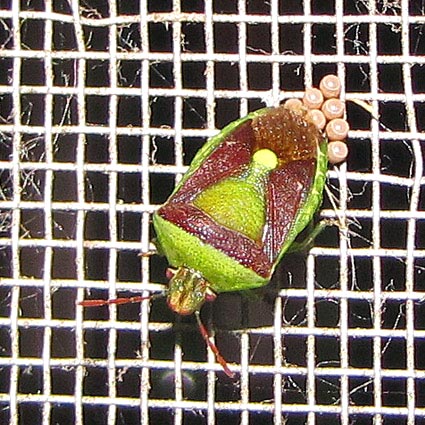 If Alfred Hitchcock had done a movie about insects, he might have chosen the alien brown marmorated stink bug (Halyomorpha halys). From their original appearance in eastern Pennsylvania just 20 years ago, they’ve spread to 33 states, have just gotten to Wisconsin, and a separate population is building along the Pacific coast. They seem to be out-competing native SBs. BMSBs feed on ornamental plants, agricultural crops and fruits, where they are also guilty of “catfacing” and of introducing rot into fruit where they pierce it. 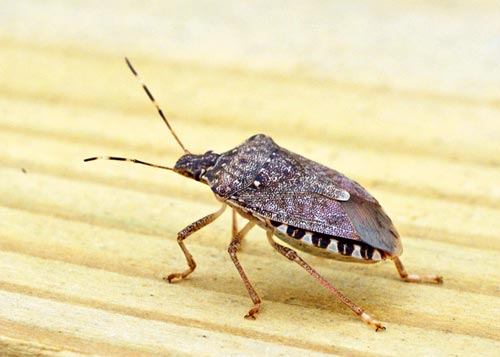 They’re also having a profound impact on non-farmers. It seems that like box elder bugs, BMSBs gather on the outsides of homes in fall, plotting to get inside. Not just a few—there are reports of front doors completely covered by them. They don’t bite, but they do stink, and they do fly through the house, lodge in AC filters, and congregate in boots and coat pockets and closets. One homeowner (ironically, a scientist who studies invasive species) reported vacuuming 8,000 BMSBs from his attic in a single day; his three-month total was almost 22,000. The potential controls—pheromone traps, BMSB birth control, and parasitic wasps, are years down the road.

The story of rough stink bugs (this one is probably Brochymena quadripustulata, the Four-humped Stink Bug) is a contradictory one. Some sources list them as herbivores, targeting fruit trees, and others list them among the predaceous SBs. Sometimes called “tree stink bugs,” they are well-camouflaged on tree bark. Their scent is “almondy” suggesting a possible cyanide component. The BugLady thinks they look like tiny painted turtles. 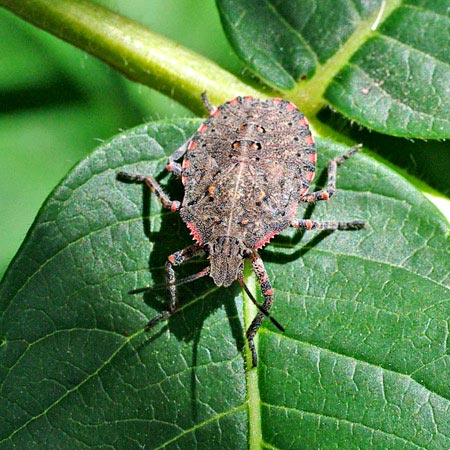 Predaceous stink bugs like the two-spotted stink bug (Perillus bioculatus) are important biological controls. The TSSB specializes in Colorado Potato Beetles, and now that the Potato Beetle has skipped across The Pond to Europe, the TSSB has been introduced there too. The first instar TSSB nymph feeds on juices from potato plants, but then it switches to potato beetles. In one study, a nymph ate 285 eggs, 3.7 larvae and 5.1 adult potato beetles on the way to adulthood. Later instar nymphs polish off 59 beetle eggs per day, and adults eat 85 beetle larvae in six weeks. When such an efficient (and host-specific) biological control exists, the lab folks try to mass-produce them, but TSSBs can be tricky to rear because they don’t thrive on “artificial” foods.

According to a study done in 1923, the red in the TSSB comes from carotenes it ingests while feeding on the gold-colored lymph of adult and larval Colorado potato beetles.