Here’s a selection of beetles that the BugLady found this summer.

A blushing beetle! Who knew? The COREOPSIS BEETLE (Calligrapha californica) is a species that has several subspecies and lots of variation, with beetles that are more and less blushy: Disonycha, Leaf Beetle, Leaf Beetle 2, Leaf Beetle 3. Members of this often-very-decorative genus have appeared in BOTW before. 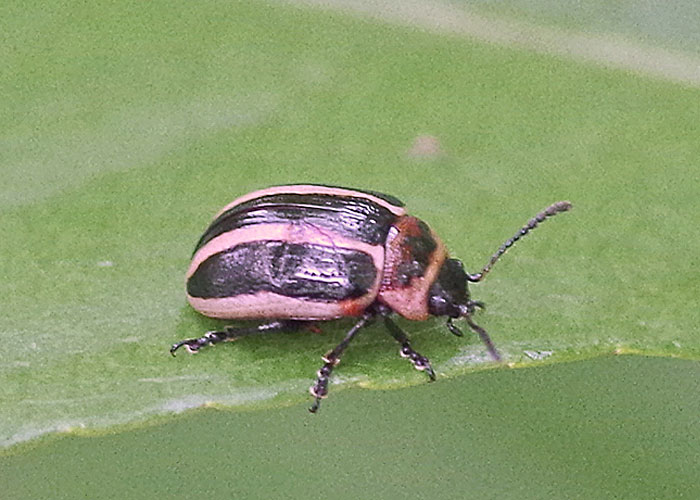 The quarter-inch coreopsis/tickweed beetle is in the large and very diverse Leaf beetle family Chrysomelidae, many of whose species are very particular about the leaves they pursue. In this case, both the larvae and the adults eat leaves of plants in the composite/aster family, particularly beggar’s tick (Bidens), Coreopsis, and ragweed, and they’ve been known to demolish a whole plant, right down to the ground! They’re found across the northern two-thirds of North America.

Eggs are laid in leaf litter near host plants in summer, and they hatch the following spring. The larvae are fitted out with egg-bursting tubercles on their thorax that assist their exit. They feed until fall and then overwinter as pupae, emerging as adults the following summer. Their larvae resemble the shiny, black larva included here. 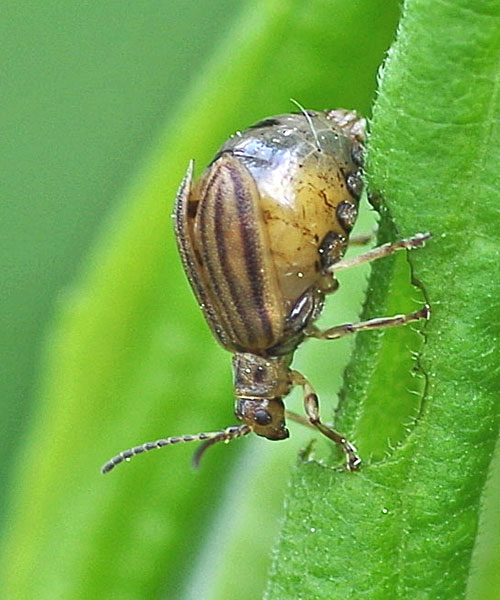 OPHRAELLA CONFERTA (probably) is another Chrysomelid. Having been pregnant a few times herself, the BugLady gets a kick out seeing these ready-to-burst beetles. Alternatively, one photographer wondered if the beetle might be full of parasites, but, a good number of the pictures in bug guide show similarly gravid-looking beetles and are labeled “female.”

There are 14 species in the genus north of the Rio Grande; Ophraella conferta can be found east of the Rockies on goldenrod leaves. It’s reported that they feed at night and that they can occur in large enough numbers to do significant damage to their host plants. 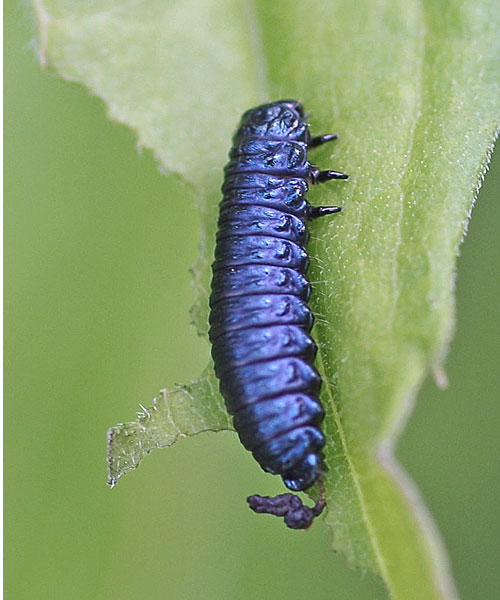 Females mate in late summer and overwinter as adults, storing the sperm internally. They don’t fertilize or lay their eggs until after they wake up and have something to eat the following spring, then they oviposit every few days, laying their eggs in tidy clumps. See this link for a set of pictures of egg through adult.

SCHIZOTIS CERVICOLIS has no common name (for no earthly reason that the BugLady could discern, one site calls it the “Flaming-pillow beetle,” but she’s not dignifying that one). It’s a Fire-colored beetle, family Pyrochroidae (because many species in the family have red or orange body parts). Male pyrochroids often have fancy antennae. The BugLady photographed it as it bobbed up and down on a stem in a wetland on a breezy day in late spring. Like the coreopsis beetle above, it resides across northern half of North America.

Check link for some nice pictures of the beetle’s life cycle. The larvae are found in rotting logs, where, according to Morphology and Systematics (Elateroidea, Bostrichiformia, Cucujiformia partim), 2010, “[larvae of] Schizotis specialize in decaying woody sections of moss-covered logs in boreal-like areas (e.g. edges of bogs). While both woody and fungal materials are found in the gut, fungi are thought to play a key role in larval development. In crowded situations, larvae may sometimes become cannibalistic, but contrary to some older reports, they are not normally predaceous.” 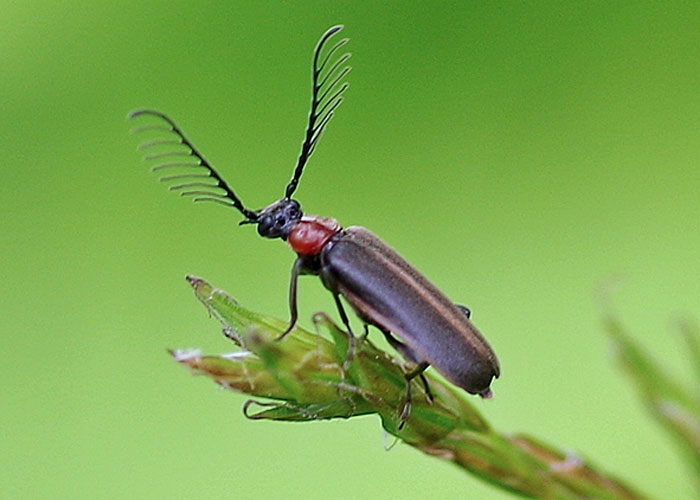 Adult males of this genus are attracted to cantharidin, a defensive chemical produced by blister beetles. For the story on that, see this previous BOTW about a different fire-colored beetle at past episode.

An internet search didn’t turn up much information on this species’ life history, but one of the “Related searches” was for “List of terms that start with SCHIZOT.” More than you’d expect.

Most of the click beetles of her acquaintance are black or dark brown, so the BugLady was excited to find this small, red AEOLUS MELLILUS (probably) under the porch light in June. Common names are the Flat wireworm beetle and, inexplicably, the Sweet click beetle.

Click beetles’ superpower is their ability to right themselves (dramatically – and with a click) after landing on their backs (Check episode). Their larvae (grubs) are collectively called wireworms, and because of their diet, some are a staple on Agricultural and Extension websites. Some species feed in the soil on dead organic matter, some on the larvae of other insects, and others on plant roots and stems. They locate their food by following its carbon dioxide trail. 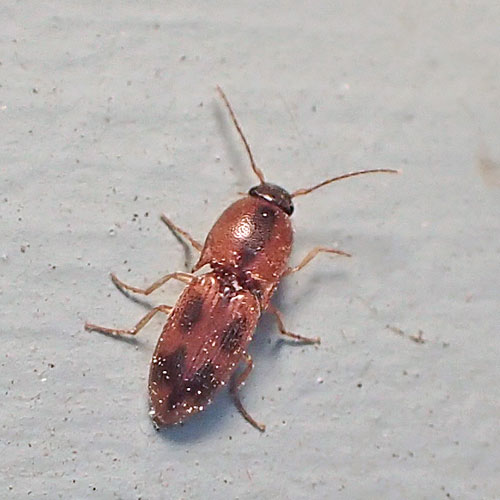 Aeolus mellilus is found in grasslands and gardens over much of North America. The larvae dine on the roots of corn and potatoes, but they also relish wheat and other cereal crops, and some sources call them a minor crop pest. They lop stems off at the soil surface instead of burrowing in like other wireworms and doing their damage from within. They are also described as fierce and active predators that probably feed on the larvae of the competition. Adults eat plants and are nocturnal.

The BugLady thinks that this is ENOCLERUS MUTTKOWSKII (unless it’s the very similar E. ichneumoneus), a Checkered beetle in the family Cleridae. There’s not much information out there on its life history – its larvae are beneficial, preying on the larvae of some beetles that live under the bark of evergreens and feed on the phloem tissue (the plant’s plumbing) in eastern/northeastern North America. Adults are generalized predators. Some members of the genus, including this one, are considered mimics of velvet ants (which, despite their name, are flightless, female wasps that pack quite a punch). Another Enoclerus beetle was featured in a past episode. 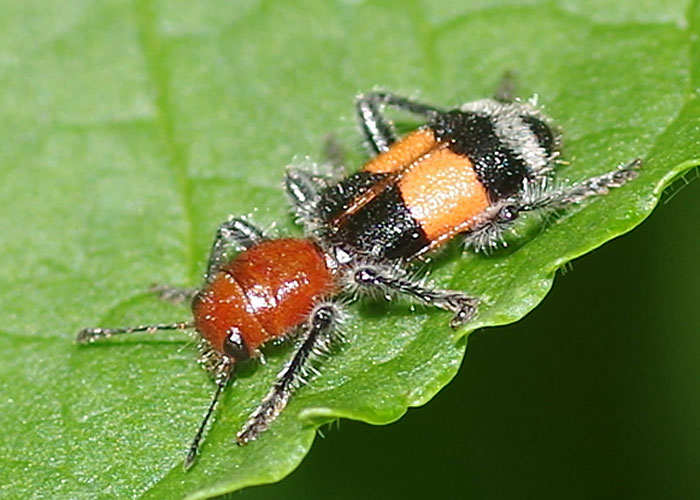 Ladybugs tend to be chemically protected, which explains their aposematic (warning) coloration, and species have a variety of ways to deliver the bad-tasting/toxic liquids that they produce/ingest. In order to feed on one, an Enoclerus beetle must either be able to excrete the toxins effectively or to sequester/isolate them somewhere in its body (and according to Rifkind, Enoclerus are pretty enthusiastic feeders, dismembering and masticating their prey, so it’s a total toxin immersion). Enoclerus</em is a sequesterer, and Rifkind says that “the further possibility that clerid predators acquire chemical protection through sequestration of ladybird prey’s toxic alkaloids is suggested as an important avenue of investigation.”

Rifkind very significantly notes that “The data presented are primarily based on photographs taken by non-specialists, discovered through Internet search. The crowdsourcing of natural history observations can reveal aspects of animal behavior heretofore unreported and even unsuspected,” (emphasis, the BugLady), and why not – there are masses of citizen-generated birding data available electronically. Here’s Rifkind’s article.